We are nearing the end of November, which means the NHL is at the quarter mark of its season. The Detroit Red Wings are 8-10-1 with 17 points after 19 games.

It’s been a season of streaks thus far, as the Red Wings went on a six-game winning streak early in the season, then lost the next five and now are on a four-game losing streak.

How have the Red Wings fared thus far? In this week’s edition of The Grind Line, we grade the team’s performance.

There’s a famous quote by former NFL coach Bill Parcells that says, “You are what your record says you are.” At 8-10-1, the Red Wings are exactly what that record says: below average. They went on a six-game winning streak early in the season, but the Red Wings often were bailed out by their unreal goaltending, which stole a couple of games during that streak.

When the goaltending came back to Earth, the losing streak began. The Red Wings live and die by their goaltending, and that’s been one of the few good qualities of the team this season.

Thomas Vanek had a great start to the season, with eight points in seven games, but then he sat out the next 11 games recovering from a hip injury. Henrik Zetterberg and Gustav Nyquist lead the team with 12 points in 19 games, followed closely by Mike Green — one of the other lone bright spots — who has 11 points in 19 games. Every other player has single-digit points. The Red Wings’ goalies, especially Howard, can’t get any goal support. Howard is last in the league in goal support, with his team averaging 1.55 goals per game while he is in net.

They are constantly hemmed in their own zone and can’t establish a forecheck. They have lost the shot attempt battle in 14 of their first 19 games, and while taking more shots doesn’t necessarily guarantee winning the possession battle, it’s a good indicator of who is controlling the play, and controlling the play generally results in a win. 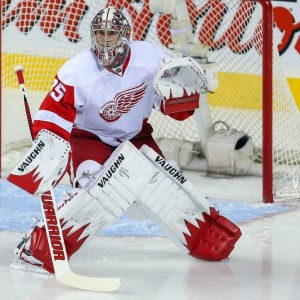 Jimmy Howard has been one of the lone bright spots for the Red Wings. (Sergei Belski-USA TODAY Sports)

If the Red Wings continue to play the way they have as of late, the grade could dip even further. As harsh as that may appear, the team has struggled for most of the season, and their bad habits have caught up with them.

Through 19 games, the Red Wings have generated the second lowest shots per game in the league (27.8), while allowing the seventh-most shots against per game (31.5). Early in the season, despite giving up more chances to the opposition, they were able to cash in on their chances.

However, the team’s inability to maintain any kind of offensive pressure has caused them to drop to 24th in the NHL in goals scoring (2.32 GF/GP), while giving up the 12th most goals against (2.68).

It’s not all doom and gloom, though. There have been some flashes of hope through the first quarter of the season, most notably the play of Jimmy Howard. At present, he sits with a very respectable 1.85 goals against average and .940 save percentage. Certainly, Howard deserves better than the four wins under his belt, but his strong play could serve as a good base moving forward.

At the end of the day, the team is going to have to sustain some offensive pressure if they want to build off Howard’s success. If the Wings continue to hang him out to dry, it’s safe to say we can expect the team to continue its downward spiral.

Giving the Red Wings a D+ may be a bit harsh, but this grade is more of an assessment of the management team that put the Red Wings’ roster together. The 20 Red Wings dressing each night are doing the best they can — it’s not their fault that the team was ill-prepared to compete.

Since the Red Wings came within a win of beating the eventual Stanley Cup champion Chicago Blackhawks in the 2012-13 Western Conference semifinals, Ken Holland really has not done much to prepare the organization for the back half of Zetterberg and Pavel Datsyuk’s careers.

Now, Datsyuk is gone, and the Red Wings lack a true No. 1 center and playmaker. Larkin has potential to fill this role but was moved back to the wing after a week at center.

So now — one-fourth of the way into the 2015-16 season — the Red Wings are a mess. Starting in net, they’ve already managed to get Petr Mrazek off his game and implement a two-starter system. Considering Mrazek is the goalie of the future, they should be doing everything they can to help build the young goalie into the franchise netminder he can be.

On defense, Detroit has a collection of second- and third-pairing blueliners who can’t seem to contribute any offense (apart from Green) and have trouble covering opponents in their own zone. Sproul has been solid, but no one really has stepped up otherwise. 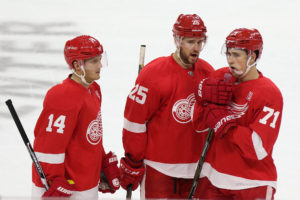 Finally, the offense has been missing completely at times. No one on the roster can create space and find others open for high-quality scoring chances. They play on the perimeter and do not have the big bodies to muck it up around the crease. Steve Ott and Drew Miller were brought in to provide veteran leadership and kill penalties but have not contributed much this season. In New York, Michael Grabner was signed for a similar price as Ott and Miller, and he has scored 12 goals for the Rangers’ fourth line.

A former coach of mine said, “Failing to plan is planning to fail.” This has certainly been the case for the Red Wings, who have failed to plan for a successful future without Datsyuk, Zetterberg, and Nicklas Lidstrom.