With the Colorado Avalanche out of the playoffs for the second consecutive year, it’s always nice to take a look at the prospects coming through the pipeline. In the Avalanche’s case, it’s a tad bittersweet: while the top five stack up well in comparison to the rest of the league, things get murky beyond that. A handful of top-20 guys not likely to be retained next season, coupled with what is amounting to an abysmal showing at the 2014 NHL Entry Draft, leave this group, outside of the top 5, mainly looking like long-term projects.

I’ve talked already about Chris Bigras and J.T. Compher, the former already looking poised beyond his years while the latter has a decent chance at cracking the lineup next year. This week’s prospect is a little bit different. With seven defenseman already signed for next year, with a new deal for Tyson Barrie likely on the horizon, the Avalanche are already looking at having a full roster of defenders before next season even begins, barring a trade or a buyout.

That gives Nicolas Meloche, one of those top five prospects for the Avalanche, a little bit more time to mature. Although at 6’3, 205 lbs, he certainly won’t have to do much physically. Drafted in 2015, he was projected as a possible first round selection but fell to Colorado in the second round at number 40 overall. Meloche is no stranger to using that big frame of his in any way he can, playing a hard-nosed style while still putting up a decent amount of points, utilizing his weight and strength behind a big shot. Just 18 years old, he’s already considered a top end talent, able to do a little bit of everything, from scoring: 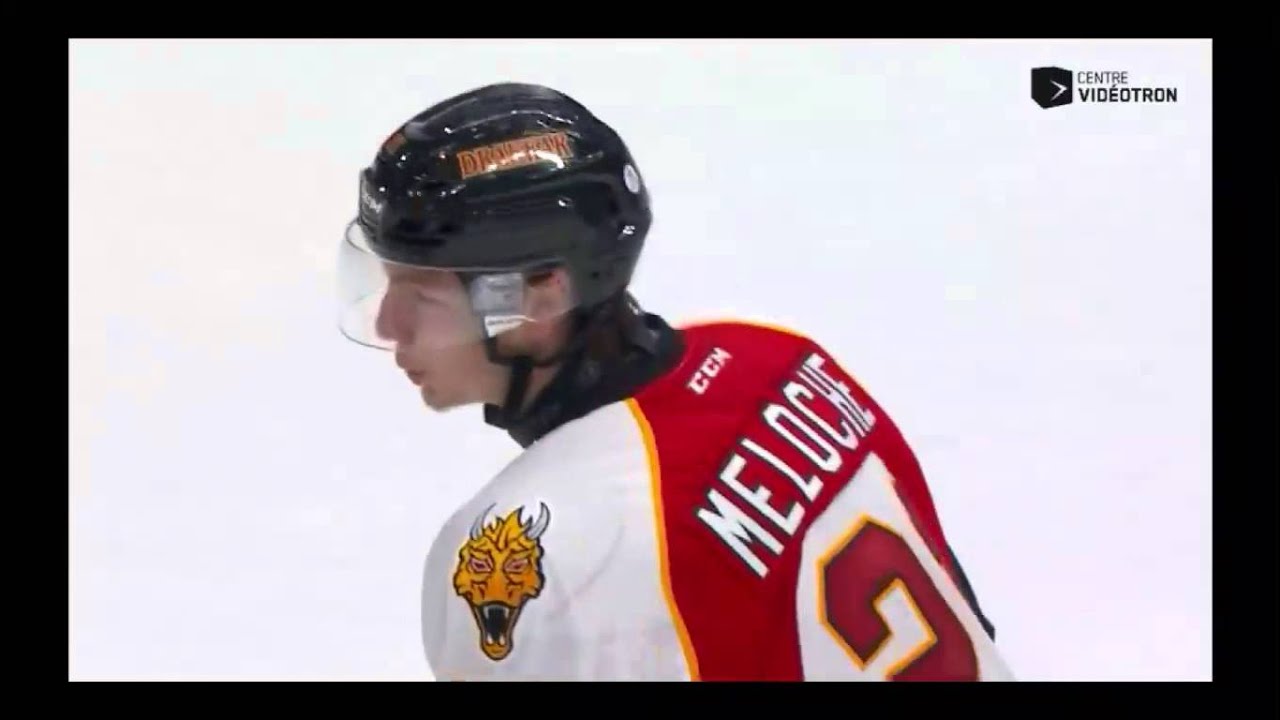 To defending his teammates:

Meloche was drafted by Baie-Comeau Drakkar 15th overall in the 2013 QMJHL Entry Draft. In his first year, he scored 25 points, setting a club record for most points by a rookie defenseman, and was selected to the QMJHL All-Rookie team. He played for Team Canada in the U-17 tournament, contributing a goal and an assist in six games.

The following year, he won a gold medal with Canada at the U18 team in the Ivan Hlinka Tournament, scoring one assist in five games. In the QMJHL, he was second on Drakkar in points for a defenseman, with 34, despite missing the final two months of the season. Meloche returned to action for the playoffs and scored 4 goals and 6 assists in just 12 games.

This past year, Meloche was traded by a rebuilding Drakkar team to the Gatineau Olympiques, where he finished the season with 33 points and 13 goals. His playoffs are currently ongoing, as he’s already pick up two points in seven games.

In every one of his junior seasons, Meloche has steadily improved either in his total points or his goal production.  Had it not been for Drakkar beginning their rebuild, it is more than likely that Meloche would have beaten his previous year’s total of 34 points.

Combining size and skill, Meloche is somewhat reminiscent of a Brent Seabrook or Dustin Byfuglien type of player, able to punish opponents in the corners or the open ice, but also having the offensive instinct to get the puck to the net. A truly deadly combination, Meloche still at least another season to grow his game in juniors before he gets a call up, but when he does, the Avalanche will have a good player on their hands.

Jim has been a freelance writer for last 3 years and an Avalanche fan for last 15.