The 2016 U18 WJC are going to start in Grand Forks, North Dakota, but this year it will be harder than usual to consider the Russians as contenders for the gold medal. The Russians had to substitute their entire roster and coaching staff earlier this month due to uncertainty in the body retainment of meldonium after it became a banned substance on January 1st. But in any case, the Russians can’t be counted out just because they are going to send a younger team as they always give their best when things are tough. The Russians, who allegedly spent 700 million roubles (some ten million dollars at today’s rate) to create and run a USTDP-like team in their junior league, will send to Grand Forks a mix of their U17 national team and some players who spent their season overseas. It is certainly a pity for the players, who tried hard the whole season and had most likely no influence on the medication and supplements they were fed with, also because there were some top prospects, like German Rubtsov, who will see their stock for the draft going down.

Team Russia had a preparation game earlier this week and they lost 4-3 SO to Team Slovakia. The team’s head coach is Sergei Golubovich, who is coaching the 99-born players for the national team for two years.

Here there are Team Russia players to watch at the upcoming U18 WJC.

After a rocky season in Russia, Kuznetsov moved to the QMJHL and had a breakout season there, becoming a key player for the Acadie-Bathurst Titans and scoring 58 points in the regular season. In a recent interview, Kuznetsov declared to be very happy about his move to Canada, but he wasn’t included in the original roster for the U18s. A big, mobile winger with a good touch around the net, it is to be expected to be placed in one of the scoring lines with center Alexei Lipanov and forward Ivan Chekhovich. 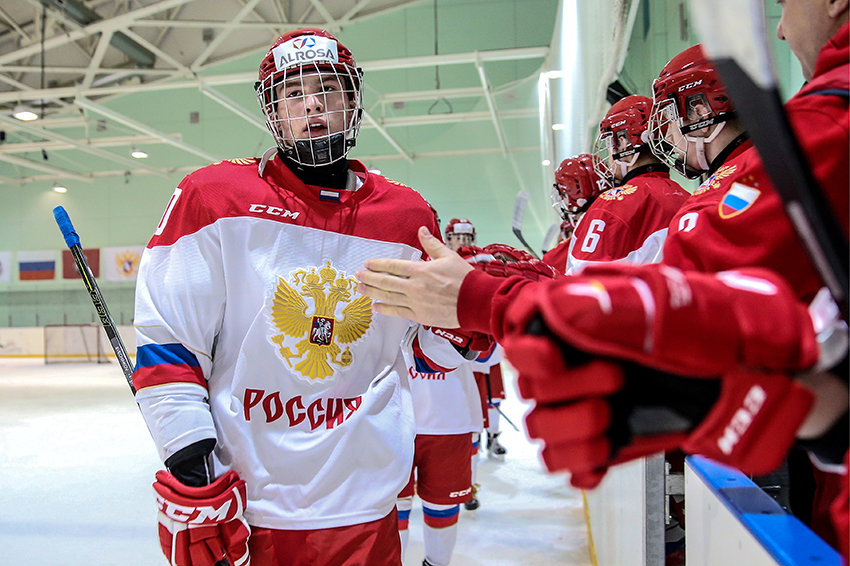 One of the most chatted-about 2000-born players in the world, Svechnikov is a top prospect eligible for the 2018 NHL Entry Draft who is expected to be picked in the first round. He is also the younger brother of Evgeny, a first-round pick for the Detroit Red Wings currently playing with the Cape Breton Screaming Eagles of the QMJHL. His actual call to the tournament wasn’t given, because of his young age in a very young team, but he is a very good player and a further year of difference shouldn’t be too much for him also due to his size (6’2″, 180 lbs.). At least initially, Svechnikov isn’t supposed to play in the first lines, but this can change should he start producing.

The first line of the team already showed his great chemistry and individual mastership in the game against Slovakia, scoring two of the three Russian goals (both with Y. Alexeyev). The three players, other than having a good chemistry cemented playing together the whole season in the Dynamo Moscow system, are good players on their own, even if they are all on the smaller side, with the exception of Kostin, the team’s captain, who isn’t a giant anyway (5’11”, 180 lbs.). The opposition teams may have some hard time in containing them especially if the ice opens up and they can exchange the puck between them in the offensive zone. This line is expected to be the team’s first option in both even strength and power play.

The top draft-eligible defenseman from Russia, Sergachev had a great rookie season in the OHL with the Windsor Spitfires scoring at almost one point per game pace. Sergachev will be one of the most experienced players of the team and he is expected to play a prominant role in all situations. He will also be an alternate captain. Expectations will be very high on him and this U18 tournament can have a good impact on his draft stock. He is expected to play with Alexander Osin or NAHL prospect Dmitriy Zaitsev.

Rubinchik is a defensive-sound defenseman who is a bit on the smaller side, but who plays bigger than his size (6’0″, 170 lbs.) and can be aggressive enough. He will be an alternate captain. He was also a member of the Team Russia U18 in the MHL at the start of the season, but after playing six games he was sent back to the Dynamo Moscow system, where he spent the remainder of the season. Rubinchik will not play the first two games as he’s out with a flu.

The preliminary Team Russia roster can be viewed at this link. The Russians will most likely keep an open spot for Vitali Abramov, should he get out of the playoffs, but considering the way the Gatineau Olympiques are playing in the QMJHL playoffs, at this point it’s unlikely to see Abramov in Grand Forks this week.