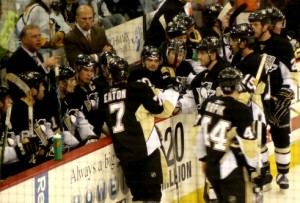 currently sit in eighth place in the Eastern Conference. They are struggling to remain in the playoff picture and are battling against teams like Buffalo, Florida and Carolina for that eighth spot. None of those other teams made the playoffs last season while the Penguins went to the Stanley Cup Finals.

And it’s true. Looking at their record the Pittsburgh Penguins are a shell of their former selves. They no longer have a virtually unbeatable home record. They no longer provide that kind of explosive offense that turns 5-2 deficits into 6-5 victories. They aren’t capable of rolling four lines filled with all-star talent.

But the Pittsburgh Penguins are still able to show flashes of brilliance.

Since adapting to and focusing on a new defensive system in the last week the Penguins have won three out of their last four games. Outside of a blip where Alexander Ovechkin and his Washington Capitals embarrassed the Penguins at home, the Pens have begun to look dominant again. Their recent victories over the Philadelphia Flyers and New York Rangers were definitely impressive.

For months now everyone has been asking “What is wrong with the Pittsburgh Penguins?”

That question can be answered in one word: Motivation.

They definitely suffered from a Stanley Cup hangover. Yes, the month of November was an outstanding one for the Penguins, but since then they have lost their drive. After competing for the richest prize in the sport against an all-star caliber team in Hockey Town, a stretch of games against Atlanta, Toronto, Buffalo and Tampa Bay simply couldn’t inspire the Penguins to play their best hockey.

When you look at it, some of the Penguins’ worst losses this season were against teams that no one would consider a threat to take the Cup. Florida, Toronto and Tampa beat the Penguins by a combined score of 15-4.

It all comes down to motivation. Now, with their backs against the wall and a host of Atlantic Division rivals as their opponents, the Penguins have risen to the challenge and performed admirably.

The lack of motivation has always been a problem for these Penguins. They have blown several third period leads by letting their collective foot off of the gas and giving their opponents a chance. Perhaps Michel Therrien doesn’t have the ability to motivate them. Perhaps what is still a very young team can’t find the heart to compete for 60 minutes every night. Whatever the reason, the Penguins can only play hard when they have to. They have the talent to compete with the best teams in the league, they just don’t work hard enough very often.

Motivation isn’t a problem in the playoffs as everyone knows what the ultimate goal is: The Stanley Cup.

It is a problem in December when last season’s playoff run is far enough away that it’s just a memory, and the current playoffs are several months away.

Looking at their recent games, the Penguins have found that motivation again. Perhaps a glance at the standings caused them to up their game. Whatever it was, it has worked recently. Now it will be up to Therrien and Crosby and the other leaders on the team to make sure that effort continues. It needs to or, come April, the Penguins could be on the outside looking in.