It hasn’t taken long for Dave Hakstol to become popular in Philadelphia. But while the honeymoon phase between the city and their new coach is just getting started, there’s plenty of risk to account for. That’s not to say the former collegiate coach was a poor choice to replace Craig Berube. But do the pros of GM Ron Hextall’s coaching choice outweigh the cons?

Since being introduced as the 19th head coach in Flyers history, Dave Hakstol has been the toast of the town. The 46-year-old bench general has been praised for his 289-141-43 record at the University of North Dakota, on top of playing a pivotal role in the development of several current NHL stars, such as Jonathan Toews and T.J. Oshie, among others.

With Philadelphia’s up-and-coming prospects serving as the focal point of Hextall’s blueprint, it’s clear how Hakstol fits into that plan right off the bat.

One of the biggest positives over his career is that Hakstol has been a proven developer of NHL talent. That could be important as the Flyers look to bring along some of their young defensive prospects like Samuel Morin, Travis Sanheim and Shayne Gostisbehere. — Chris Peters, CBS Sports

The dividends for those attributes aren’t exclusive to prospects, however. After all, the Flyers’ current roster features three forwards at age 23 or younger in Sean Couturier, Brayden Schenn, and Nick Cousins.

Hakstol’s system, which is predicated on defense and speed, not only match Hextall’s vision, but serves as the model of success throughout the league. Parts of the philosophy of Philly’s new coach can be seen in Alain Vigneault’s New York Rangers, who’re known for their speed, tight checking, and shot blocking.

“We have a damn good nucleus of players and we know that we have to sort out our defense and we think that’s coming very well,” Flyers owner Ed Snider told CSN Philly’s Tim Panaccio.

That’s just a taste of what Hakstol will bring to Philadelphia, though.

Whether it’s in-game adjustments, or player development, the former IHL defenseman is best known for adapting to change as it comes.

“When you’re looking at the evolution of the game and where it’s come, Dave Hakstol has been right on top of it whether it be scouting in the USHL, scouting Midgets, scouting in Canada,” said NHL analyst Craig Button via NHL.com’s Dan Rosen. “Just look at the players that Dave has prepared for the NHL. Good players. Impact players. You have to be doing something right when they can come into the NHL and be ready to perform.”

For a Flyers team that lost the last 11 games of the season against non-playoff teams, Hakstol’s attention to detail and preparation are just what they need.

Hakstol is an excellent communicator and commands respect from his players. He’s tough when he needs to be without being overbearing and encouraging without coddling his roster. — Mike Johnston, Sportsnet

With such an impressive reputation and body of work, no wonder Hextall was so persistent in obtaining his top choice. But while Hextall and a large portion of the fan base are all-in on Hakstol, that doesn’t nullify the risk that comes with all the good.

What Could Possibly Go Wrong?

While there’s no reason to doubt that Ron Hextall did his due diligence in his coaching search before hitting on his top target, there are plenty of questions that should be asked.

How will Hakstol handle the difference between the collegiate game and the NHL? More specifically, how will the discrepancy of moving to an 82-game schedule from one that’s nearly half as much shorter play out? And how will the new bench boss handle personnel that are already being handsomely paid?

Hiring Hakstol is embracing the long run. There will be a learning curve from the NCAA. There will be twice as many games in a season. There will be millionaires with job security rather than students on scholarship. He’ll make mistakes. — Greg Wyshynski, Puck Daddy

Hextall, of course, was quick to point out his new hire’s serious demeanor on Monday, reiterating his belief that Hakstol won’t have any problem whatsoever taking charge.

That may be so, but what about Hakstol’s lack of NHL experience?

Never mind the fact that the only coach to win a Stanley Cup in his first NHL coaching gig since the 1999-2000 season was Randy Carlyle in Anaheim. That’s more of a trivia answer than it is a flaw in Hextall’s decision-making. But Hakstol’s complete lack of any professional coaching experience should raise an eyebrow.

Hakstol is the first college coach to step directly into an NHL head coaching job in 28 years. Herb Brooks was the last to do it when he left St. Cloud State to coach the Minnesota North Stars in 1987, however that situation isn’t the same because Brooks had previously coached in the NHL.

When being compared to other current coaches in the league who were at the right place and time to receive their break, a la Tampa Bay’s Jon Cooper, the pro experience (or lack thereof in Hakstol’s case) makes it a case of apples to oranges.

“I don’t have experience at this level, so I’m not going to pretend that I do,” Philly.com’s Frank Seravalli reported Hakstol of saying. “I do have a great deal of confidence in what we do, in what my philosophies are and in the fact that they’re going to be successful here. I can sit and say whatever I want here today. Bottom line is I have to go out and do the work.” 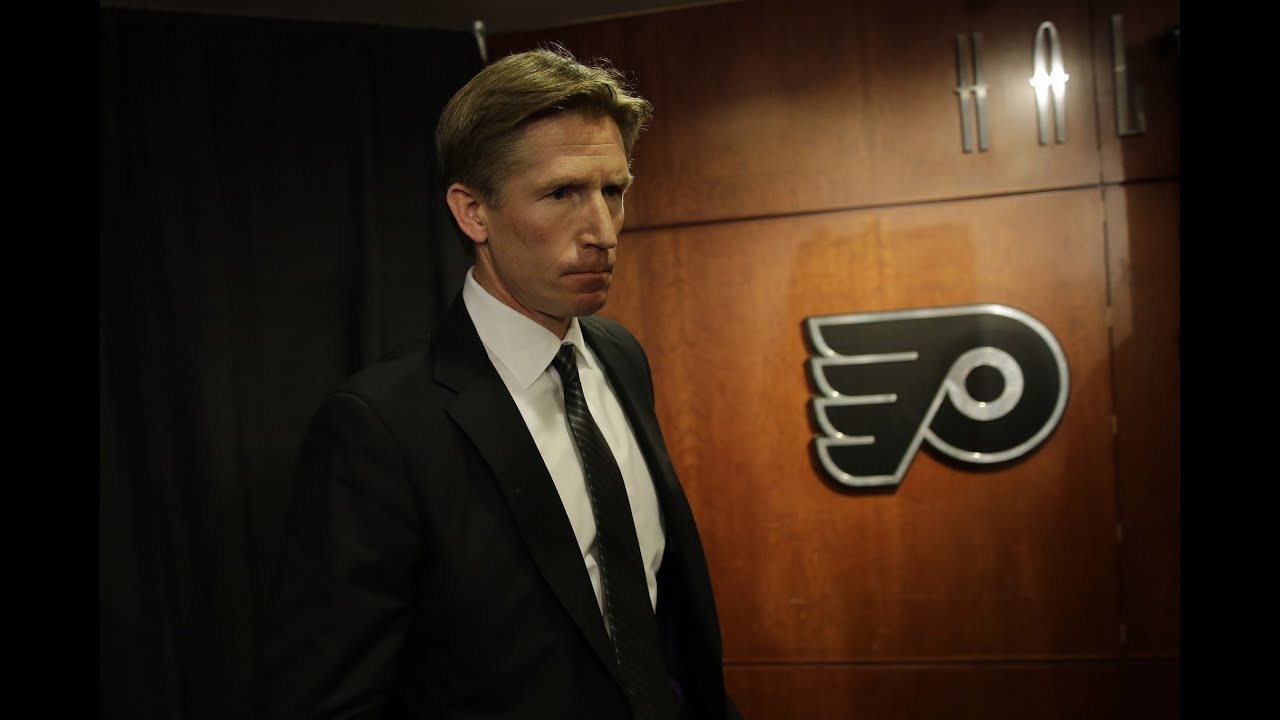 Since his hiring, Hakstol’s lack of professional experience has been vastly downplayed. And without a crystal ball to know if it truly will have a significant effect, analysts and fans alike could very well be right in doing so.

It’s a fascinating hire and says a lot about the confidence Hextall has in his ability to pick a coach. The safe move for an inexperienced GM would have been to get a veteran coach but Hextall took a chance here, similar to the way Lightning GM Steve Yzerman has done in his coaching hires with Guy Boucher and Jon Cooper. — Craig Custance, ESPN

After that, of course, is the Mike Babcock angle.

Hakstol appears to be cut from the same mold as Toronto’s newest prize – a coach with a teaching mentality that’s specialized in player development. Like Babcock, Hakstol is considered a “no-nonsense” leader, earning the notoriety of being overly serious. Look closely enough as well, and the two even look similar in appearance.

Essentially, Hakstol could be considered Mike Babcock’s stunt devil without the experience of the Stanley Cup-winning coach. With that being said, why not just make a run at Babcock himself? After all, he too fits Hextall’s strategy, and it’s not like the Flyers were short on funds to make an attractive offer?

“Every head coach in the NHL at some point is a rookie, right? That’s reality,” Hextall said according to the Courier-Post’s Dave Isaac. “Some of them go through the American League. Some of them don’t.

“Everything checked out the way that we hoped it would check out. I had a list of things I wanted from a head coach and went down this checklist in my mind. Every box was checked except for the NHL experience and, quite frankly, for me it was the one that’s the least important.”

Hextall may actually be onto something.

Babcock inherited a Red Wings team from Dave Lewis that was perfectly balanced with veterans and prospects. Toronto’s $50 million man stepped into his role in Detroit with Brendan Shanahan, Nicklas Lidstrom, and Steve Yzerman on the roster, in addition to younger versions of Pavel Datsyuk, Henrik Zetterberg, and Niklas Kronwall.

Babcock was terrific in developing his younger players, turning late-round picks such as Datsyuk and Zetterberg into stars, but he was never the architect of Detroit’s organizational structure. Furthermore, his pair of gold medals as head coach of the Canadian Olympic team were achieved with rosters that were flat out unfair to the rest of the competition.

In other words, Babcock’s résumé, while accomplished and deserving of praise, may be a bit inflated.

Babcock’s experience, however, cannot be considered irrelevant. He did lead the Mighty Ducks of Anaheim to a Stanley Cup Final appearance, after all, before winning two Conference Final series’ and a Stanley Cup with the Red Wings.

Ron Hextall seems intent to put a unique imprint on the #flyers, unless of course he thought he was hiring a relative in Dave Hakstol

After weighing the pros against the cons, it appears Dave Hakstol is a solid, yet unique choice. His popularity doesn’t stem exclusively from his success at North Dakota, as his philosophy aligns with that of Ron Hextall’s. And as a fresh face from outside of the organization, it’s a move that brings added optimism.

Dave Hakstol may not be Mike Babcock… yet. But he’s clearly not Craig Berube either.