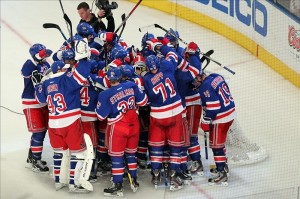 For the ninth time in 10 years The New York Rangers are headed to the Stanley Cup Playoffs. After Thursday night’s humbling 5 – 1 victory against the red-hot Ottawa Senators and a little help from the Boston Bruins as they fell to the Anaheim Ducks in OT, The Rangers clinched the first playoff spot in the 2015 Stanley Cup Playoffs.

You can assume the best is yet to come from The Rangers with the return of Lundqvist coming up sometime this weekend against either the Boston Bruins or the Washington Capitals. Who knows, Hank might want in on both. The Rangers have a couple of good reasons for being the first team to clinch a spot in the playoffs this seasons besides the King himself.

#NYR ARE OFFICIALLY GOING BACK TO THE PLAYOFFS!!! #BlueShirtProud pic.twitter.com/3cP4sbPOt8

Back in February the Rangers lost Lundqvist to a vascular injury as a result of getting hit with a puck to the throat off a shot against the Carolina Hurricanes on January 31st. During the absence of Henrik Lundqvist, the Rangers have gone 18-4-3, with Talbot having won 16 of those contests.

Cam Talbot, The Rangers backup, had to take on the pressure of being number for the first time in his career. He handled the job well, going 16-4-3 with a .929 save percentage and two shutouts. Talbot had a .909 save percentage in his first 13 starts and the Rangers offense averaged 3.61 goals in those games.

Talbot won his 20th game of the season in Ottawa on Thursday. In doing so, he and Lundqvist are only the fifth duo to each win 20 games in the same season.

#NYR Stats: @ctalbot33 is the 1st NYR goaltender other than Henrik to record 20 or more wins in a season since Richter in the 2001-02 season

The Rangers speed is their greatest asset. They have entered the zone in control and with speed, or been able to chip the puck past defenders and reach it before the opposition has a chance to set their defense, or even turn to retrieve the puck. The Rangers are playing stellar 5v5 hockey which is tailor-made for their best attributes of speed.

Duck’s coach Bruce Boudreau and team witnessed first hand how dominant the Rangers speed is in their 2-7 loss to the Blueshirts.

“They’re a good hockey team, came to play and worked us in every facet of the game,” Getzlaf said. “They capitalize. They’ve been a quick-strike team for years now.”

You can’t pin point the Rangers success on one person but if you had to credit the team’s success, much of what’s going on starts behind the bench. AV has found ways to ensure his team success while players are plagued with injury or just not producing enough offense.

AV has found 3 lines of scoring:

The Rangers have scored the first goal in 45 of their games this season and are an impressive 36-6-3 when doing so.

AV has done an excellent job on keeping Talbot calm, cool and collected as he has shown no signs of doubt in the ‘Goal-Buster.’ AV’s faith in Talbot has boosted the confidence of his new starter and shown positive results for his team.

The Nashville Predators moved into top spot with a 3-2 win over the Tampa Bay Lightning.

The Panthers are within 3 of a wild card spot as the Boston Bruins are tied with Ottawa for the last spot in the East.

Now here’s a little something for everyone to enjoy over and over on loop;