As we count down the days until hockey season kicks off once again, we’ve found several ways to pass the time. One of our more comical pastimes of late has been looking into one of the stranger parts of the hockey world: team names.

Minor league hockey teams, in particular, have a tendency to have some pretty weird names. I suppose it draws more attention, but on the other hand, it can draw some pretty good laughs if it’s your first time hearing of the team.

Here at The Hockey Writers, we’ve compiled a list of the strangest hockey team names of all time. For sanity’s sake, we’ve been taking it five teams at a time, but if you’re hungry for more, be sure to check out our first two pieces here (Part One) and here (Part Two). 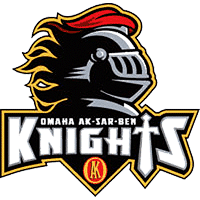 The Omaha Ak-Sar-Ben Knights, the former AHL affiliate of the Calgary Flames, have one of the stranger names in hockey, especially when you look into it. The Ak-Sar-Ben Knights were named after an Omaha Civic Organization (The Knights of Ak-Sar-Ben), which was birthed in 1895 in an attempt to keep the Nebraska State Fair in Omaha.

After partnering with the organization, the hockey team became tacked on the “Ak-Sar-Ben” (which is Nebraska spelled backwards). Despite being relatively successful on the ice (The Ak-Sar-Ben Knights finished first in the West in their second season), the team was relocated in 2007 after just two seasons.

I guess people like their team names forwards, not backwards. 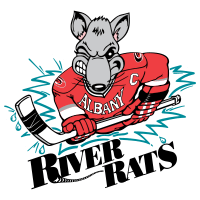 Hockey teams just seem to have a thing for rivers. Previous posts included the Salmon Kings, and the River Kings, but now we’ve moved on to the sewers, where we’ll look at the Albany River Rats.

The Capital District Islanders, who played at the Houston Field House on the campus of Rensselaer Polytechnic Institute (RPI), changed their name to the Albany River Rats when they were purchased by the New Jersey Devils in 1993. The team remained the Devils affiliate until 2006, when they became the Colorado Avalanche’s affiliate for just one season. From there, they moved on to become the Carolina Hurricanes affiliate, and moved to Charlotte to become the Checkers.

Back to the name, “River Rats” rolls off the tongue quite nicely, but it’s a strange name. Albany is located on the Hudson River, which is presumably the reason for the River, but why the Rats? Kind of  strange weird if you ask me.

Fun Fact: The Albany River Rats took part in the longest game in AHL history in April of 2008. The River Rats lost to the Philadelphia Phantoms 2:58 into fifth overtime, after giving up 101 shots on goal (98 of which were saved).

The Syracuse Crunch are the AHL affiliate of the Tampa Bay Lightning, and have been in existence since 1992, when they were the Hamilton Canucks (affiliated, obviously, with the Vancouver Canucks). In their 23 years of existence, the team has been affiliated with the Vancouver Canucks, Pittsburgh Penguins, Columbus Blue Jackets, Anaheim Ducks, and finally, the Tampa Bay Lightning.

Over the years, the Crunch have had some pretty strange logos, some of which were slightly terrifying. The “Crunchman”, the team’s mascot, was created when the team moved to upstate New York in 1994. However, from 2000-2012, the team used “Al the Ice Gorilla” (what?) as their mascot. The Crunchman made his return in 2012, and remains with the team today. 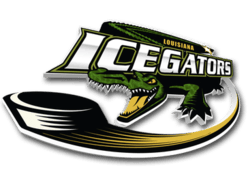 The Louisiana IceGators of the SPHL is the second-coming of the IceGator. The original team played in the ECHL from 1995-2005. In 2009, the team was brought back, as part of the SPHL, and has survived ever since.

With regards to the name, what can be said? Hockey teams seem to have a thing for putting animals in unnatural habitats, and the IceGators is a prime example of that.

Oh, the Rockford Ice Hogs. There’s so many things we could say about you.

The IceHogs are the affiliate of the AHL Chicago Blackhawks, and have what is arguably the greatest name in the AHL. I honestly have no idea who comes up with this stuff. The Ice Hogs? Seriously? I understand changing an intimidating animal to an “Ice-something”, but a hog? Why?

Oh, and let’s not forget about the Ice Hogs’, or should we say, “Los” Ice Hogs’ racist uniforms that were worn on Latino Night:

Ok New Jersey is off the hook. Rockford Ice Hogs are the ugliest hockey jerseys EVER! pic.twitter.com/KPHGUNxbYQ

If it gets crazier than this, please let me know.