To kick off the month of September, we dove in and explored a comical piece of the hockey world – the strangest team names of all time. Across the minor leagues, (and even in the NHL), teams of young and old have been represented by some rather obscure names. In our first post, we looked at five of the hockey world’s strangest team names, including the Wheeling Nailers, and the Greenville Swamp Rabbits, to name a few.

Today, we’ll continue our list of strange team names, as we check out the next five that made the cut. (In case you missed the first post, we’ll be making our list five teams at a time, in order to remain sane). 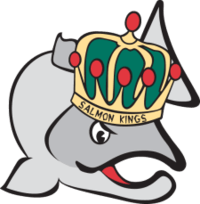 The Victoria Salmon Kings began playing in the ECHL in 2004, and have what is undoubtedly one of the strangest nicknames in all of professional sports. The Salmon Kings? I guess it’s… the king of the salmon? Unfortunately, the Salmon Kings ceased to exist after the 2010-11 season, and the legendary name has become one for the books. 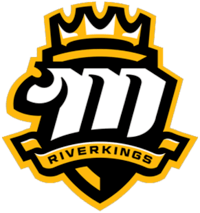 The Salmon Kings may have ruled over the fish, however, they weren’t the top dog. At the top of the river food chain stands the Mississippi River Kings, formerly known as the Memphis River Kings.

The River Kings won two consecutive Ray Miron President’s Cups as champions of the CHL in 2001-02 and 2002-03, but have yet to capture a championship in the SPHL.

As far as the name, many believe that the team was named after the one and only Elvis Presley, who lived around Memphis.
(For the record, the team has one game per year called “Elvis Night, dedicated to The King, in which they sport Elvis Presley hockey jerseys. No, we aren’t kidding.)

Others take it more literally, and believe that they’re quite simply the Kings of the Mississippi River. After all the team did rock a pretty slick Turtle logo from 2001-2014. 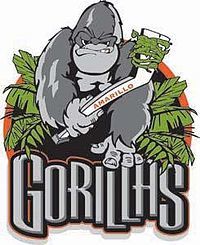 The Amarillo Rattlers, who would later become the Gorillas, began play in the Western Professional Hockey League, or WPHL, in 1996. Out of Amarillo, Texas, the team failed to make the playoffs in each of its six years in the WPHL. In 2001, the team moved to the now defunct CHL (Central Hockey League), and failed to make the playoffs in their first year there as well.

Obviously, there needed to be a change, and the Gorillas were it. In 2002, the team changed its name from the Rattlers to the Gorillas, and saw immediate success. Apparently, gorillas are better at hockey than you would think. The Gorillas made the playoffs for five straight seasons, but never advanced past the semifinals.

Besides looking exactly like the Gorillas in Disney’s Tarzan cartoon, the Gorillas made for a pretty unique hockey team name, especially given their hometown of Amarillo, Texas (I don’t think there’s many gorillas in Texas!).

In May of 2010, and the Gorillas went down, to be remembered for years to come.

Maybe we’ve become used to it after fifteen seasons in the NHL, however, the Minnesota Wild have a pretty strange name. After all, the team’s name is a word that is generally used as an adjective.

The question is, how did the Wild come to be? Seven seasons after the North Stars left Minnesota, the Minnesota Wild were founded. In 1998, the name “Wild” was chosen from a group of six possible names (and let me tell you, the Wild was the right choice). The Minnesota Wild were almost made the Blue Ox, the Northern Lights, the Voyageurs, the White Bears, and the Freeze.

Wild isn’t sounding so bad now, is it.

On the bright side, Minnesota’s name gives them some flexibility when it comes to jerseys and logos, and have, in my opinion, some of the coolest jerseys in the NHL as a result.

What is there to say.

For starters, if you’re unsure of where Bossier-Shreveport is located, you can find the metropolitan area in Northwest Louisiana. Began in 1997 as the Shreverport Mudbugs, the team survived for fourteen seasons, in the Central Hockey League, and the Western Professional Hockey League.

Maybe their awful nickname pushed away potential fans. I mean seriously, would you want to wear around a MudBug shirt? How in the world could anyone decide on that name? MudBugs aren’t very intimidating, nor are they very fun. In fact, what even are they?

That does it for our second edition of the strangest hockey team names of all time. If you missed it, check out our first five teams here. We’re ten teams in, but we still have plenty to cover, so keep an eye out for part three!

Have a team that needs to make the list? Suggest it in the comments, or tweet it to me @CamHasbrouck and we’ll see how worthy it is.