Though 18, 000 Wild fans fit into the Xcel Energy Center for virtually every home-game, that hardly covers the rest of the fans scattered around the state (and let’s not forget Wisconsin and the Dakotas), viewing from their Lazy Boy’s or local bars.

Those are the fans the Wild should be worried about. Because those fans are blowing up message boards, Twitter, and Facebook with a fury of insults directed at Fox Sports North and subsequently, the Minnesota Wild. 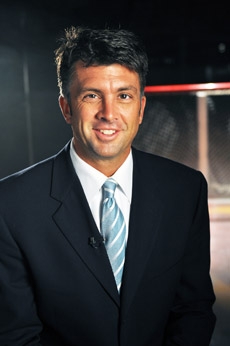 On Tuesday, the official word was out. Anthony LaPanta would be the new voice of the Minnesota Wild’s television broadcasts. A true Minnesotan, Anthony LaPanta’s hire seems to suggest that the Wild and Fox Sports North were more concerned with fulfilling LaPanta’s lifelong dreams than creating happy fans.

“I have dreamed of doing NHL play-by-play since I was very young,” said LaPanta. “To have this opportunity in my hometown is truly special. I am a lifelong resident of the State of Hockey, and hockey is in my blood. From my work covering the Minnesota Wild for the last eight years, to calling games at the high school and college level, to spending as much of my free time as possible as a youth hockey dad, the game has been a huge part of my life. This is the opportunity of a lifetime for me” (foxsportsnorth.com).

As LaPanta outlined in his quote on the Fox Sports North website, he is no stranger to the Fox Sports North team or the hockey world. His mini-resume is completely true. He is seen by Gopher Men’s Hockey fans, Twins baseball fans, and Timberwolves basketball fans who live in the far recesses of the state or simply do not attend every single home-game; watching on their home television sets.

The fans know him. He’s everywhere.

And thanks to his job promotion, his childhood dream job, it is now known that fans could care less what he’s done or that he’s a home-town guy.

We’re all for rooting on the home-town boys here. But how many other youth hockey dads in this state have dreamed of covering NHL games?

Fans weren’t particularly thrilled with LaPanta as a rumored job candidate for the Wild’s play-by-play. And they aren’t jumping for joy with the announcement of his hire. They wanted quality. A true voice of Minnesota Wild hockey; not just the dad sitting in the bleachers next to you narrating the youth hockey game.

For a team who needs all the support they can get, hiring LaPanta was not a move that fans are wild about. Some fans may correctly or incorrectly see the hire as a reflection on the Wild – not Fox Sports North. Of course Fletcher did not hire LaPanta. After all, the man will be sitting in the rafters of the Xcel Energy Center, not skating with the team.

But the Wild are on thin ice. They’ve upset the fans. The powers that be, for the Wild and the Wild broadcasts missed the mark.

Is this a sign of more bad decisions to come? The off-season is young. Who else will be hired amidst absolute anarchy?

LaPanta may be the new voice of the Wild, but the fans, they are the true voice of Minnesota Wild hockey.

Clay Matvick (video below – his voice)

Megan is a native Minnesotan who loves The State of Hockey, the month of March in Minnesota, and Tator Tot Hotdish. She is the volunteer camp director at a girls’ hockey camp every summer and writes about all-things Minnesota, especially hockey, on her blog http://mnmeditations.wordpress.com. A newbie at The Hockey Writers, she is honored to be covering Minnesota Wild hockey.