A few days ago the Canadien Press block-quoted Daniel Cleary:

“The league is waiting for us to make the move, and we’re waiting for them to move. So someone has to move.”

Not true. I witnessed this exact scenario unfold in 1985 during the Worst Junior High Fist Fight I Ever Saw.

This is a true story. I was in the 8th grade, in the boys’ locker room after PE class. You see, my friend Mike was a devious guy. And he loved after-school fights.

Not fighting, he didn’t love to fight. He loved to manufacture them, watch them, and then talk about them for weeks afterwards. In some cases for 20 years afterwards.

We had PE class with this red-headed kid named Mark. Mark was enormous. He was at least six foot, and not an awkward, growing-into-my-body six foot. If you tell me he was really a 25 year-old undercover narc, I would believe it. 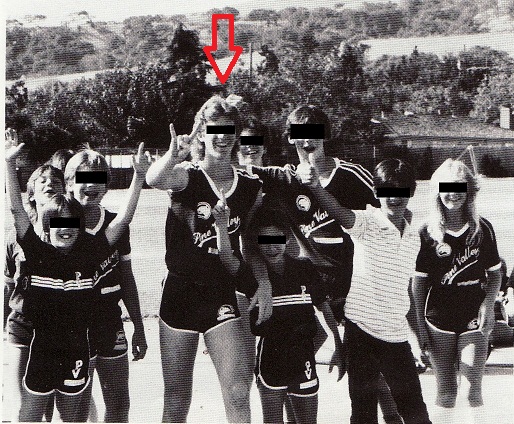 Mark the Narc? Maybe. Those are all 8th graders around him.

So right there, after PE class in the boys locker room, Mike tells Mark that he heard that this other big kid named Al was talking trash about Mark, saying he sucked at basketball.

Al was a good basketball player. But where Al would make a lay-up, Mark would dunk.

Because this was 1985, I can’t possibly be expected to remember anything else between that moment and shortly thereafter when the fight card of the year was set: Al v Mark. As per the illustration scanned from my 8th grade yearbook and marked with red arrows, those two circled the school with maybe fifty of us behind them in an eager, swirling tail. Then we all pooled at the red X at the bottom.

Holy crap this was gonna be huge.

The red Goliath stood a few feet from Al. Kids were swarmed in a circle around them like the barricade at a concert. “Fight!” chants faded silent. Someone tapped out a drumroll on a car hood.

Quiet for a beat, then:

Discontent bubbled up in confused murmurs. Why weren’t they slugging it out?

Then our principal broke it up.

One might be tempted to find an analogy between Al v Mark and Gary v Donald. Don’t fall for that. Al v Mark was a milestone moment in the development of two frightened, confused kids who had been swept up into a fight neither wanted nor even knew why it was happening. It is the worst fight we saw that year, but it should not be forgotten. Despite the immense pressure on each of them, the coward Falstaff’s words rang true: discretion is the better part of valor. Maybe both guys didn’t want to lose, but neither saw winning as being all that crucial either.

Gary v Donald bears no eternal parable. No timeless lesson for the ages. Just two too many attorneys in the world lacking the discretion to know how or when to lose.