Following our successful effort to compile THW’s first-round predictions, some of The Hockey Writers’ best minds let us in on their thinking for the second round. By surveying writers from THW and reporting the results to our readers, we hope to provide readers with a sense of who the THW hivemind thinks will win each round and why. More than a mere crowd-sourced playoff bracket, I also asked folks who or what they thought the difference would be in each series.

Over just 24 hours, 19 THW staff members participated in an online survey, focused on each of the four second-round matchups.

Here are the results.

Round two sees the top two teams in the Atlantic division face off. After a thrilling game 7 win, the Bruins will hope they can match Tampa’s scoring punch and goaltending strength. The Bruins offensive cycle is always a threat. Will injuries keep them from competing?

According to the THW, this is going to be a close, tough series. Most think it will go 7 games. Believe it or not, by just one vote TWH contributors are calling the Boston Bruins over the Tampa Bay Lightning. 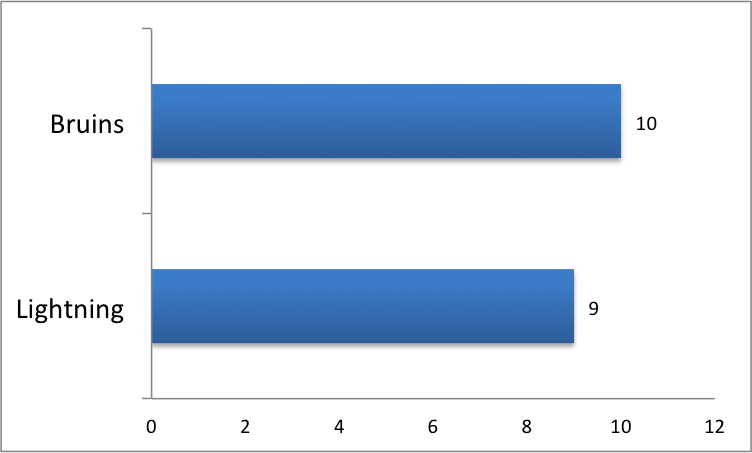 For those who think Tampa will win, THW contributors pointed to “scoring depth” while others suggested the Lightning have “better defensive depth.” According to one contributor, “it’s likely going to be a long series and the well-rested Lightning may be able to take advantage of their opponents who are coming off an emotionally draining series against the Toronto Maple Leafs…”

Many see Vasilevskiy as a difference maker and think that the Lightning will “have an edge in goal.”

For the majority, the Bruins 3-1-0 record in the regular season is illustrative. Likewise, many think the team’s experience and “leadership of Chara and Bergeron” will be the difference. The team’s “depth and toughness” and “right mix of experience and youth,” including phenom Jake DeBrusk, was also noted. One commentator was more circumspect: “The Bolts have speed, but I can’t see the Bruins losing this one. They are more physical [with] a better defensive corps.”

This will be a tight, seven-game series. Boston is the better team overall and should pull out the final win like they did against Toronto.

In another top two battle, the Washington Capitals are looking for revenge against the Pittsburgh Penguins, their postseason nemesis. With Malkin out, many thought the Caps would take advantage in Game 1. Instead, the Pens came back in the third period. Will this be deja vu all over again? 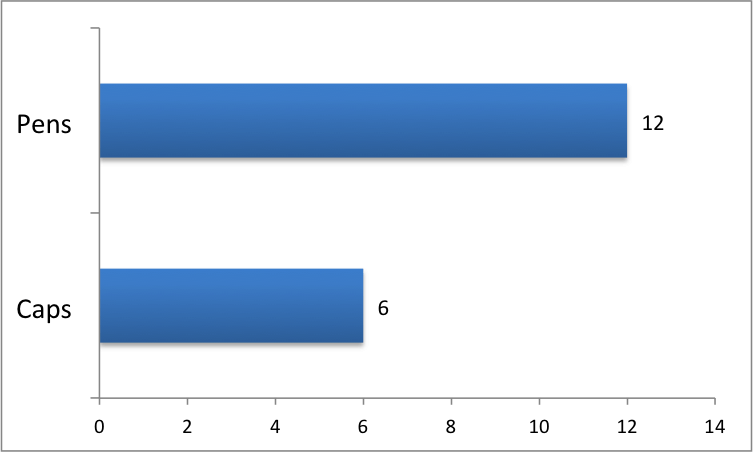 Despite the strong support for the idea that the Pens will continue their supremacy over the Washington Capitals, most see this series being very close. In fact, while three respondents suggested this series would only go five games, the rest split their votes between a six or seven-game series.

Those who think the Caps can win refer to the fact that “the Caps are determined to win and break the curse.” Others echoed this idea. “It needs to happen at some point. If Malkin is out for any longer than one game, that will hurt them.” Others suggested “vengeance and retribution” will drive the Capitals and their mission to prove the curse is broken.” Others believe fatigue will play a factor. For example:

Factor in all the hockey the Penguins have played over the last three seasons, and Ovechkin and the Caps are due to beat them (finally). A lack of pressure on the Capitals seems to be what the doctor ordered, as they finally found their game after everyone thought they were down and out against the Blue Jackets. No one expects them to win here.

Most pointed to the past as being predictive of the future. “This is just the latest matchup between these teams. Caps can’t seem to finish in the postseason.” For some, it is about talent. “The Capitals just don’t have enough to beat the Penguins” and “Pittsburgh and Sidney Crosby are rolling once again and they have the Caps’ number in the playoffs.”

In addition to experience, many note that the Pens seem to  “be in the Caps’ heads.” The Pens “own them and always will,” because “the Capitals are cursed.”

[The] Caps can’t seem to beat Pittsburgh. I have trouble believing it will be any different this year… Death, taxes, and the Penguins beating the Caps in the playoffs.

In one of the most anticipated series of the second round, the top team in the Central Division will battle Canada’s team, the Winnipeg Jets. Nashville has experience, depth, and elite defense corps. The Jets have a young fast team, with multiple offensive weapons. Can the Whiteout advance? 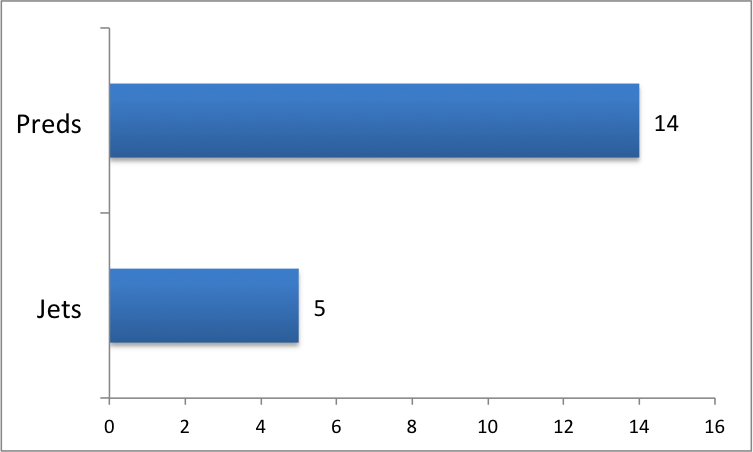 According to the THW hivemind, the answer is “no.” While a majority predict a long tough series, by almost a three to one margin, the Predators are predicted to win in seven games.

No one doubts how great this series could be. Described as a “barnburner,” for some it is too close to call. “I flipped a coin. It came up tails. Saber-toothed tigers have tails. There you go.”

Some think the “…Jets’ youth [will] shine.” Others concede that the “Jets are banged up,” but many see them as “on a roll…[and] have what it takes to finish the job” This is because they are  “…loaded with talent on every line” and will “…out-muscle the Preds.”

However, most think that the “Preds have experience and depth. Winnipeg is strong but prone to errors.” The Preds have the edge based on their “experience.”

Others point to the “balance through the club” and depth at center. Many think Nashville’s defense will be insurmountable. For example:

The Predators home record is incredible but they have the better D, the more experienced Goaltender, and depth through four lines up front. I see the Cup going to Smashville.

The Vegas Golden Knights have yet to lose a game in the postseason. At some point, many people assumed reality would reassert itself. However, Vegas is playing with house money and bring a full team forecheck to every game. Vegas might have won big in Game 1, but no one is counting the Sharks out, are they? 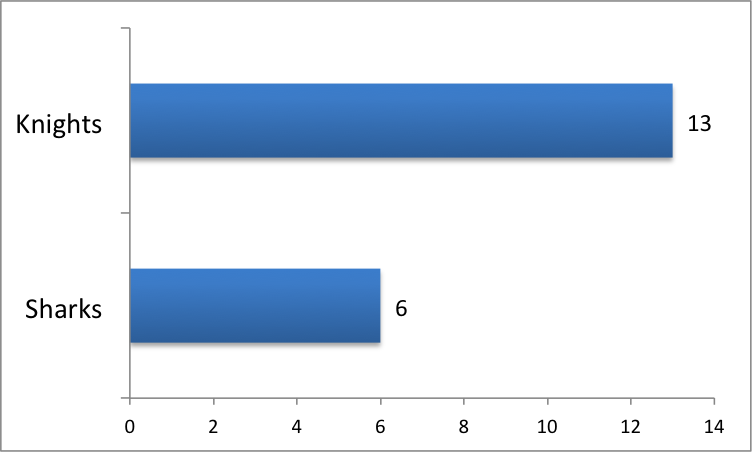 Actually, yes. It seems as though most are counting the Sharks out. This opinion was expressed even before the 7-0 shellacking in Game 1. A majority see this series going six games.

For those who see San Jose as having the edge, their view is based on the fact that the “Sharks have more experience and better depth. Vegas has had a great run but their momentum had been killed after sitting for a week.”

Others note that San Jose is “just as deep as Vegas, but better high-end talent.” This includes Evander Kane. Some assume that the “Knights emotion will start to fade” and that “this story is going to end sooner or later. SJS have the strength to do it.” For these folks, while the ” Golden Knights have a lot to be proud of but I just don’t see them winning this series.”

Most are ready to stop doubting Vegas. “Everyone has doubted this team. They are a true contender.” Likewise, “nothing makes sense anymore. May as well jump on the Las Vegas Golden Knights bandwagon and enjoy the ride.”

Vegas has “explosive offense and Marc Andre Fleury.” In addition, “as long as they have Home ice, they’ll win.” Some concluded: “Vegas is so hot right now and has their whole city, and hockey fans everywhere, behind them.”

Vegas is playing with house money. Good team with strength at all positions…Vegas plays is an amazing example of where the sum is greater than the individual parts. They are playing a … complete team game right now.

Do you agree with these predictions? Do you buy the justifications on offer? Let us know below. Who do you think the final four teams in this year’s playoffs will be?