Here at The Hockey Writers, we have some smart hockey minds, those who provide in-depth analysis, and some very strong writers. Most of us believe we can predict, with some accuracy, playoff outcomes. But can we? This year I will be surveying writers from THW and report to our readers on which team they think will win each round and how many games it will take them. More than a mere crowd-sourced playoff bracket, I asked folks who or what they thought the difference would be in each series. Over 48 hours, 23 THW staff members participated in an online survey, focused on each of the eight first-round matchups.

Here are the results. 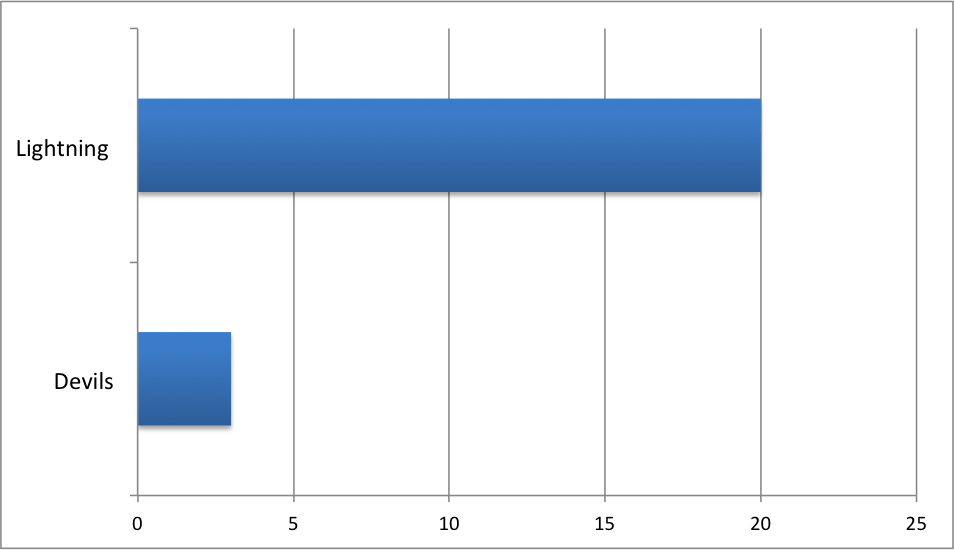 No doubt here. Twenty of 23 staff think Tampa Bay Lightning will beat the New Jersey Devils. When asked how many games this series will be, the majority think five games. This means the Devils could win just one game this postseason.

When asked what the key factor in the series will be, many folks suggested that Tampa is a “better and deeper and faster team” and that “the three best defencemen in this series are Victor Hedman, Ryan McDonagh, and Anton Stralman.” Many think “Tampa is more experienced” and “has too much talent.” A few mentioned Nikita Kucherov by name and seem to believe that “[the] Lightning know how to play in the playoffs” and even that “Tampa Bay is on course to win another Stanley Cup.”

One person noted that the “Devils went 3-0-0 against the Lightning in the regular season and are coming into the postseason on a hot streak.” Another suggested that “the Devils’ youth and speed” will win out against the “complacent” Lightning.

Tampa is deep all over; Jersey has one line and, all due respect to Keith Kinkaid, a glorified backup in net. 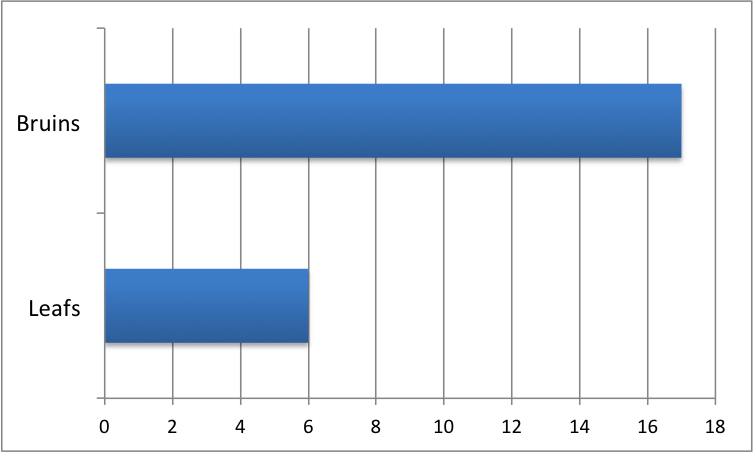 Many spoke about the Bruins’ “experience, grit, and depth.” Others focused on their “…better defense and special teams.” While some see the Leafs has a worthy opponent, mentioning Auston Matthews by name, more think “the Bruins have been one of the top teams in hockey for half a season now and it’s not the Leafs’ time just yet.”

Not everyone agrees. For example “I think the Leafs are hungry for it this year, and once they can solve Rask they can take down the Bruins easily.” Likewise, another THW writer believes that “Boston is slowing and still struggling with injuries.”

I feel like the Maple Leafs are still learning the ropes while the Bruins have the leadership (Bergeron, Chara, Marchand to a certain degree) to overcome the disparity in depth up front. 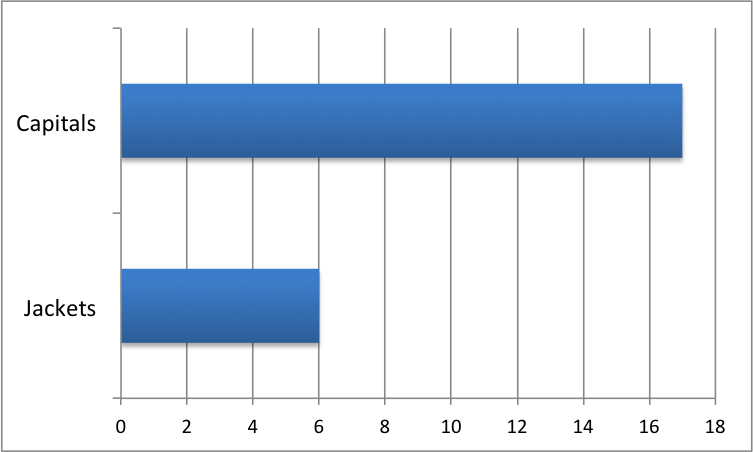 Many think this series will be “really close but [the] Capitals have been a more consistent performer in the regular season.” Another respondent stated: “WSH on paper has a deeper lineup, [but I] wouldn’t be surprised if CBJ pulls off [the] upset.” Others think “the Blue Jackets are the hottest team in the NHL right now.”

For many, Washington has “…depth on defense, more speed” and “too much talent.” Many mentioned goaltending. “Bobrovsky’s season has been decent, but overrated. While Holtby’s been far from great, Washington’s offense will expose the holes in the Blue Jackets’ lineup more.” THW writers identified Alex Ovechkin as a key difference-maker on offense.

Better special teams and the uneven play of the Blue Jackets were also mentioned. Some think that this is the year the “Capitals finally break through” and “break the curse.”

[The] Capitals have been great during the first round of the playoffs in past years, [they] will be that way again. 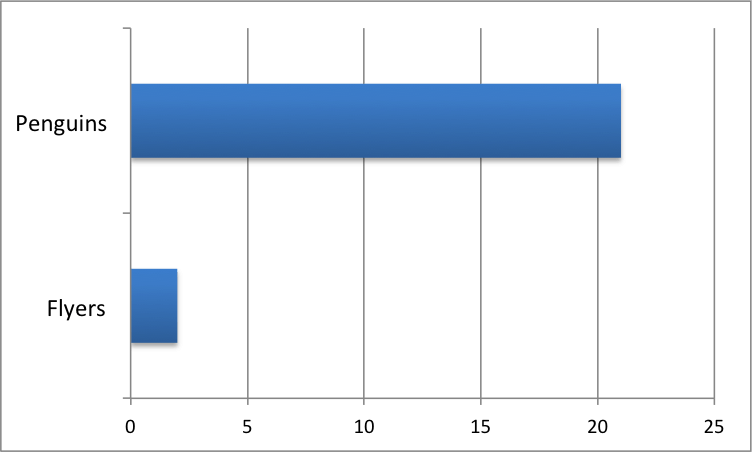 There is a clear winner here. Twenty-one of 23 respondents believe the defending Stanley Cup champions will take this series in six games. When asked what the key difference will be, respondents offered similar answers.

Many mentioned their status as defending champs and playoff experience. For example “The defending champs aren’t going down without a fight.” Others noted that the “Pens owned the regular-season series” and that Pittsburgh has “Fewer question marks, better special teams, higher top-end talent.”

Others mentioned the Pens skill players and star power. For example “Crosby, Malkin, Kessel coming at PHI in waves. Simple as that.” For some, the issue is the limitations of this Flyers team. “Philly lacks great goaltending. Pittsburgh will exploit Mrazek.”

A few disagreed. For example, “[The] Flyers are peaking at the right time, while the Penguins have played a ton of hockey.”

The Penguins are likely tired after two straight championship seasons. They’re still too strong to go down in the first round, though, especially to a team that just barely made it in. 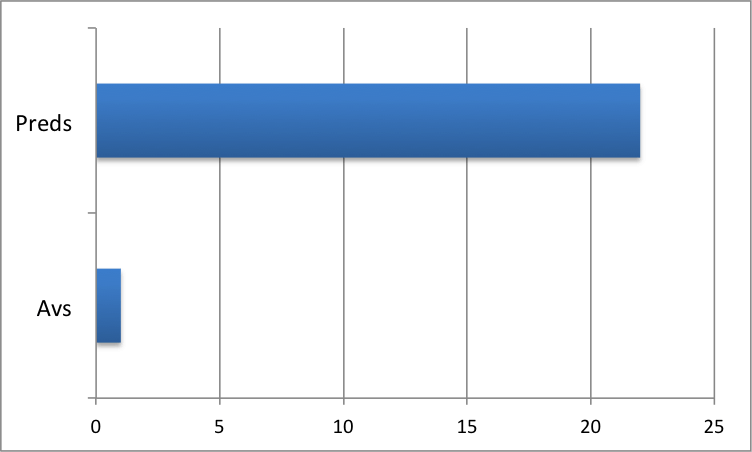 No doubts here. Twenty-two of 23 respondents think the Preds winning and winning big. A large majority see this series going only five games.

As the Presidents’ Trophy winners, many suggest the “Preds are the best team in the league” and some pointed out that the “Preds [have[ beaten [the] Avs every game this season.”

This is a “team knows what it takes to get to the final” with “too much talent” and “greater depth at all positions.” Some suggested the “Predators are poised to finish the job from last year.”

Others seem to have no love for Nashville. “As much as I would love to see the downfall of the Preds, they are the team to beat in the West as long as Pekka Rinne continues his hot streak.” Others are pulling for the Avs, “mostly because it’d be an astounding and fun upset for the Avalanche, who have been in playoff mode for three months now.”

A number of writers agree that “Colorado are missing Varlamov, Johnson and Nashville outmatches them easily.” This is because of a “stronger blue line [with] more power”

Nashville will shut down an overachieving Avalanche squad who’s just happy to be here. 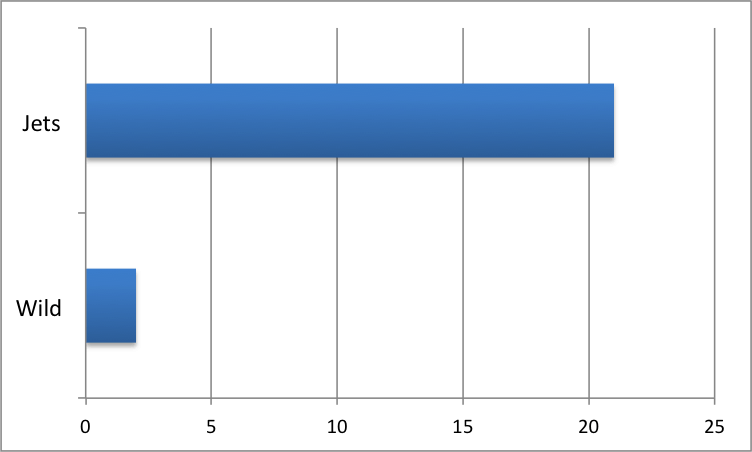 There doesn’t seem to be much doubt here as well. Nearly all writers expect Winnipeg to win this series in six games. While Winnipeg seems poised for a deep run, THW staff had a few different reasons for this.

Many expect the Jets to do well based on the fact that the “Jets are faster, meaner, and less banged up” and that they “…have too many weapons on offense.” Others mention Patrick Laine, as part of “…one of the best top-nine forward groups in the league.”

While some believe “Minnesota’s playoff struggles will continue,” others pointed out that this series might be expected to be closer if not for injuries. Many pointed out that the “Ryan Suter injury hurts Minny’s chances big time.” Another respondent said, “I would already like Jets in this series even if Minnesota had Ryan Suter and Jared Spurgeon in their lineup and they don’t!”

Not everyone is convinced. One person described this series as a “flip of a coin, it’s that close.” Another stated, “…this one can go either way, but I think the Jets have the tilt on offense.”

Most think, “the Jets are arguably the league’s most complete team,” and “on a different level. Overall, the “Jets are stronger defensively and score a lot of goals.”

The Jets have a special group of players, and I’m not sure the Wild have a way to slow down that top-nine. 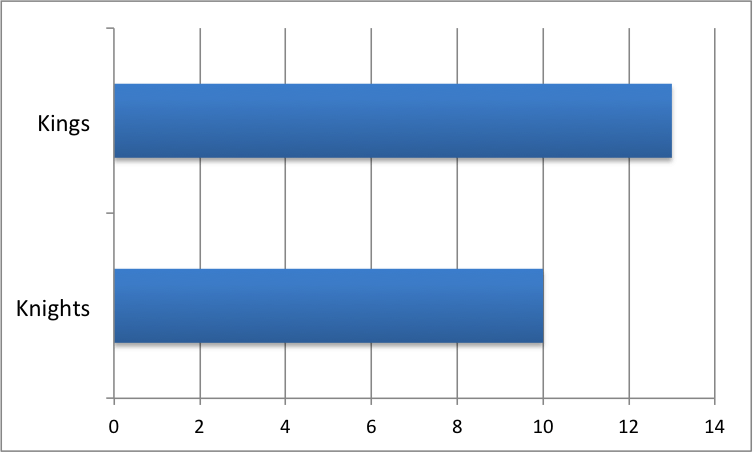 Up to now, I have agreed with the majority of my colleagues. In this series, I decidedly do not. A small majority think the Kings will top the Vegas Golden Knights, the best story of the 2018 NHL season. I look forward to when they admit the error of their ways. The consensus seems to be a six-game series. So why do folks doubt Vegas? In a word: experience.

Many point to “experience winning out”. For example, “Vegas is faster, but LA’s experience and stronger defense should carry them.” In addition, “Veteran LAK know how to win in playoffs, Quick has better D support than Fleury.”

Others point to LA players such as “Kopitar, Doughty & Quick, [who] are absolute studs this year.”

Indeed, the play of the LA back end seems to have convinced many. “LA has a fantastic defense that will shut down Vegas,” another said.

While some noted how exciting Vegas has been this year, and that the “Golden Knights are the best story of the season,” many seem to expect that “the joyride is over for Vegas. This is a tough draw for them.”

I just can’t help but feel like the Sinderella (“Sin”derella, get it?) run for Vegas will come to an end against a largely playoff-proven Kings team. 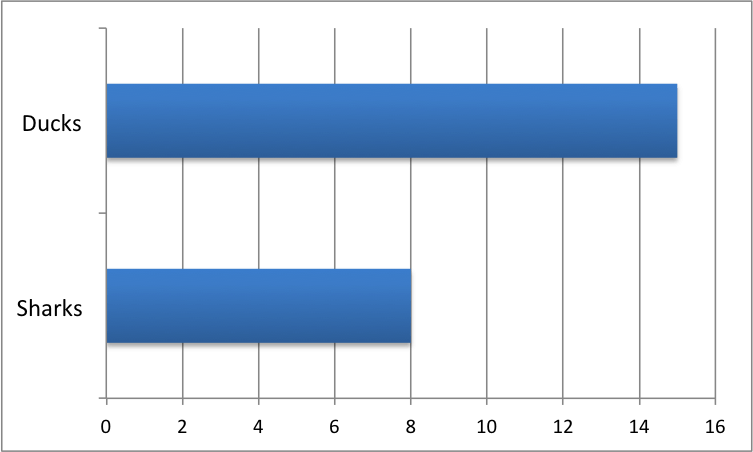 By a vote of 15-8, THW respondents expect the Anaheim Ducks to beat out the San Jose Shark. A majority expect the series to go seven games.

Respondents think the Ducks have “superior defense and goaltending” with “…more grit to their game.” Others pointed out that the “Ducks have a ton of momentum and [are] built for the playoffs” and that the “Ducks seem tougher.”

While some consider San Jose a good opponent for Anaheim, others pointed out that the “Sharks struggled to end the season, [and the] Ducks won 10 of [their] last 12.” For some folks, “the Ducks are a team no one wants to face in the playoffs.”

Not everyone is convinced. Some point to the strong play of Brent Burns and suggest that the “Ducks are suffering too many injuries to keep up with the Sharks” and that the “Ducks [are] too inconsistent.”

While one person suggested, “Anaheim doesn’t win Game 7s,” others were more circumspect. For example, “Closest series to call, but [the] Sharks have the edge due to being strong at center and on defense with Fowler out.” One fun idea: “My upset special, Evander Kane has changed the chemistry of the Sharks.”

Most seem to think “the Ducks have a better team right now,”  are “tougher,” and that “the Ducks are hot and will get it done, [because the] Sharks tend to choke in the playoffs.”

The Ducks come into the playoffs as the hottest team in the NHL, and as long as their offense continues, the Sharks won’t give them a problem.

Enjoy the first round, everyone. I will follow up on these predictions and solicit some more for Round 2. I promise not to gloat too much when Vegas takes the Kings’ crown in the first round. Vegas, baby. Vegas.