While seeing the likes of Evgeni Malkin, Steven Stamkos and the Sedin’s near the top of the NHL scoring race is certainly no surprise to anyone, there are always a handful of players who’s production is likely to cause someone to take a second look and say “he really has that many points?”

Here are the top ten players who’s production this year might come as a surprise to some:

10. Martin Erat, Nashville Predators: For many, it would be a challenge to even name a forward on the Nashville Predators let alone come up with who their leading scorer is. On the rare occasion the Preds are discussed, you can bet that the likes of Pekka Rinne, Shea Weber and Ryan Suter will be the names mentioned, but rarely are any of the club’s forwards talked about. Martin Erat has long been Nashville’s most productive forward and is quetly doing so again this year; leading the team in scoring with 39 points in 45 games.

9. Olli Jokinen, Calgary Flames: Calgary fans were quite confused when Jokinen was brought back for a second time a year ago. This year, they might be just as confused to see the veteran forward having an excellent season for the low-scoring Flames. With 40 points in 52 games, Jokinen is just one point behind Jarome Iginla for the team lead and has far and away been the club’s best all-around center. 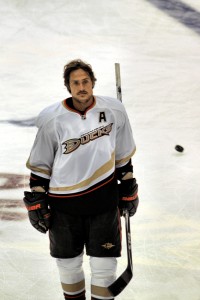 8. Teemu Selanne: Anaheim Ducks: Last year, Selanne shocked the hockey world with a 31 goal, 80 point campaign as a 40-year-old. This year he might be outdoing himself as he is again putting up close to a point-per-game and leads the Ducks in scoring. Outplaying the likes of Hart Trophy winner Corey Perry and Ryan Getzlaf, Selanne continues to defy the logic of age in this the 19th season of his remarkable career.

7. Radim Vrbata, Phoenix Coyotes: Already closing in on his career-high of 27 goals and 56 points set back in 2007-08 season, Vrbata continues to be a major scoring threat for the Coyotes. An unheralded player throughout his career (including being a 7th round pick in 1999) Vrbata is a silky-smooth, super-skilled plyer who doesn’t get the recognition he deserves.

6. Ryan O’Reilly, Colorado Avalanche: Just 21-years-old and already in his third NHL season, O’Reilly has become one of the biggest steals from the 2009 NHL Draft. A second-round pick of the Avalanche in that draft, O’Reilly has given the club a huge boost with his unexpected offensive production this year. Besides leading the team in goals, assists and points, O’Reilly is also the Avs most reliable center as he is someone that head coach Joe Sacco can use in any situation.

5. Valteri Filppula, Detroit Red Wing: For the last few years, Detroit’s offense has been spearheaded by Pavel Datsyuk and Henrik Zetterberg. While they certainly continue to rely heavily on those two star players, a new scoring star has emerged for them this year. Known for his tremendous speed and solid two-way play, Valteri Filppula has already established a career-high in points and currently sits second on team scoring behind Datsyuk (five ahead of Zetterberg) with 42 points in 52 games.

4. Ray Whitney, Phoenix Coyotes: At 39 years of age, the man known as “The Wizard” keeps on doing what he has done his whole career; put up points. Closing in on the 1000 point plateau, Whitney is in the midst of another excellent season as he leads the Yotes in scoring with 45 points in 52 games. He also leads the club with a +15 rating despite not really being known as a defensive player throughout his career.

3. Matt Moulson, New York Islanders: When naming off the players who have produced back-to-back 30 goal seasons the last two years, I don’t think very many people would think to include Matt Moulson. The Islanders forward is well on his way to making it three straight 30 goal seasons as he already has scored 23 times this season. Along with John Tavares and the next player on this list, Moulson continues to be a bright spot on the Island.

2. P.A Parenteau, New York Islanders: After spending much of his first five years as a pro hockey player in the AHL, Parenteau surprised many with a 20 goal, 53 point campaign a year ago, and is building on that season this year. With 47 points in 51 games, Parenteau ranks in the top 25 of league scoring and is fifth in the league with 36 assists. Even though he has been taken off the Tavares and Moulson line at times, the 28-year-old continues to be an offensive force for the Isles.

1. Patrik Elias, New Jersey: One of the more unappreciated star players of his generation, Elias is again leaving little doubt that he will go down as the greatest forward in the history of the New Jersey Devils when he decides to hang up the skates. While his superstar teammates Zach Parise and Ilya Kovalchuk get most of the attention on and off the ice, Elias continues to quietly go about his business without much fanfare. The 35-year-old leads the Devils with 51 points in 51 games, ranks in the top 15 in league-scoring, and like a few others on this list, could easily have laid claim at being included in the All-Star Game.