Week 17 is a classic bounce back week for most fantasy players as the normal week is reintroduced. Think about it the “Break” caused some pretty crooked fantasy numbers that are likely not to be seen again this fantasy hockey season. It always happens this time of year.

As 2012 rolls on in fantasy leagues, it is time to first reveal our Fantasy Player Of The Week. 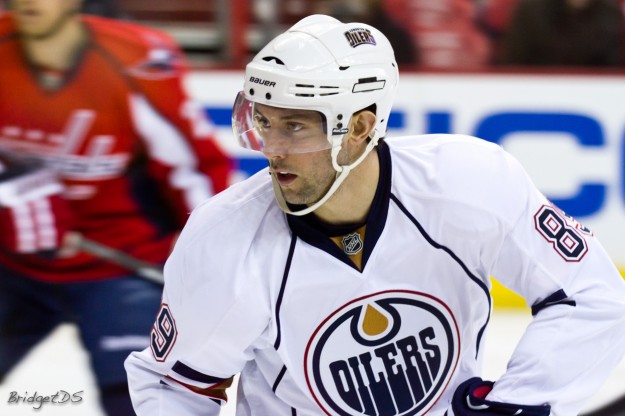 Sam Gagner truly had 80 minutes to remember but can that continue even in a lesser form? (Bridgetds/Flickr)

Congratulations to Sam Gagner of the Edmonton Oilers who wins Week 16’s nod for Fantasy POTW with what could be described as one incredible four period stretch of hockey.  Remember Evgeni Malkin stole the honor a few weeks ago with one afternoon of blazing hockey. However, Gagner did something that even got Wayne Gretzky’s attention when he tallied four goals and four assists against the Chicago Blackhawks last week. When he started off with two goals and an assist against Detroit on Saturday, Twitter went on fire. Now it was unfair for people to expect that pace to continue as Detroit clamped down a bit better as the game went on. However, the damage had been done and any Gagner owner had to be smiling from ear to ear. The question remains is what does Gagner have left and is he even an Edmonton Oiler at the deadline? Both are very good questions and do not have clear answers.

The biggest problem for Gagner owners is not Ryan Nugent-Hopkins but it may be Tom Renney and Steve Tambellini. The coach and GM have not addressed basic depth issues and no one knows really what Gagner’s upside truly is. It will be interesting to see how long the wave rides or if the Forward is traded. Week 17 should have tempered expectations with elevated shot totals still likely.

Sidney Crosby (Pittsburgh Penguins) — So let’s get down to business and say that Crosby has a soft tissue injury while recovering from concussion like symptoms and call it a day. Crosby skated in New Jersey yesterday as he recovers gradually. If you see him before your fantasy playoffs, consider it a surprise.

Mike Green (Washington Capitals) — Green is still out as he went right back on the injury list with the same groin injury once again. If you are in a one year league, Green should be dropped immediately. If you are in a keeper league, stash him away until further notice or maybe just until next season. It is for the best fantasy fans. Let’s revisit this one in March.

Andrei Markov (Montreal Canadiens) — The coldest way to describe the Markov injury is just look somewhere else. Even if Andrei Markov returns, do you even know what your getting in him? Can he even stay healthy? Presumably he is practicing but it becomes anyone’s guess as to the next time he plays. In keeper leagues, Markov is a question mark at best right now. You have been warned!

Simon Gagne (Los Angeles Kings) — Gagne is currently on the IR with concussion like symptoms and with his previous concussion history, it may be awhile before he comes back. The problem lies in the fact that Gagne has not even been able to progress to basic baseline tests to see if he can start skating individually. Just be prudent here and not expect Gagne to return anytime soon.

Matt Duchene (Colorado Avalanche) — Duchene is still out amazingly and at this point it is anyone’s guess as to what the actual holdup is. There is some nagging sense that the Avs are hiding something here. No one wants to ever make that accusation but it could be anything from additional damage to just a little scar tissue. Either way we wil keep you posted as to Duchene’s return.

James Wisniewski (Columbus Blue Jackets) — Wisniewski is injured again with a broken ankle that will keep him out at least a minimum of 6 weeks. His 17 points in 29 games is nice but that -18 is an eyesore that cannot be ignored. The defenseman will still be out at least a couple more weeks as his recovery is progressing well. There is no sense in dropping him just yet.

Mikko Koivu (Minnesota Wild) — Just a quick note as Mikko Koivu will miss at least a month with a shoulder injury not two weeks as reported in Week 15. We do apologize but sometimes setbacks and a new diagnosis comes in. Hopefully you have alternative fantasy options and the waiver wires do seem to be bursting at the seams lately. Kyle Brodziak has been hot ladies and gentlemen and may be the future top line pivot or second liner at the very minimum. See if you can snatch him up.

Jose Theodore (Florida Panthers) — If you are an owner of Theodore, just be a bit wary. When age and injury creep up, it can be a very lethal combination. Goalies are important to fantasy success this time of year and whether it is tendonitis or a strained knee, at least monitor any and all injury reports. Theodore is questionable for Tuesday but who knows at this juncture. Also, see how he plays.

Danny Briere (Philadelphia Flyers) — Briere was injured just before the All Star Break and continues to remain out with concussion like symptoms. He has not passed any baseline tests yet but appears to be closer to returning than his teammate James van Riemsdyk, who also has a hip issue to compound problems. Both guys can be kept on the IR for this week.

Evander Kane (Winnipeg Jets) — Kane has been out for a few weeks with a concussion and could honestly be out for several more. it will be interesting to see how he progresses in his recovery. He has not passed any baseline tests as of this moment. Keep him out for this week at the very minimum.

There are other injuries but these are ones that impact fantasy rosters the most  at the moment. Players like Adam Henrique were recently activated and so many others are coming and going so it is important to check out Twitter for the absolute latest.

These are for the players who have seen their values shoot up in Week 17.  Some are waiver wire pickups but most are not. February gets into the dog days just before the NHL Trade Deadline so here are a few ups before we get to the downs.

Jordan Eberle (Edmonton Oilers) — It was good to ride Sam Gagner’s coattails in the last week evidently. Eberle had 8 points in that extended Week 16 and is up to 52 points on the season. What is encouraging also is that Eberle is shooting the puck more (12 SOG in his last three games). He is their best player and will contribute in ways other than scoring. Expect his good fortune to continue into Week 17 and beyond. Look our for his fantasy playoff production as well. He is the type of player that could really enjoy a surge in late March and early April.

Ilya Kovalchuk (New Jersey Devils) — Sure Kovalchuk plays a ton (almost 25:00 ATOI) but he is prone to second half surges like last year in particular. He had another three points on Sunday (1 G, 2 A) against the Pittsburgh Penguins. He appears poised to have a strong Week 17 as well and the reality is you should just be letting the good times roll with Kovalchuk. Sure the +/- is mediocre but the power play points, goals, and assists are well worth a minor detail or two. Did we mention Kovalchuk’s shots on goal are up too? Those are solid selling points.

David Clarkson (New Jersey) — Wow are we going to hear it for this one. Allegations of being a homer will run wild but the bottom line is we praise the best here. Clarkson had seven points in just the last seven days alone which makes him a high target in leagues for Week 17. Yes he has a propensity to fall and is not a celebrity for it but he also hits, racks up some PIMS, and now has 20 goals on the season. Start him going forward as he is one of those players that just seems to produce numbers on your fantasy stat sheet.

Detroit Goaltending — With the broken pinky injury to Jimmy Howard, dreams of a 50 win season are dashed (surely Martin Brodeur fans are happy). Seriously, the injury does expose Detroit’s fatal flaw and that is the lack of a competent backup. Ty Conklin is just not the player he used to be and honestly Joey MacDonald is just a one or two game fix that crashes like a Zeppelin anytime he plays more than that. Depending on how long Howard really is out (2 weeks…4 weeks…or longer), the Red Wings may have to consider actually going into the trade market and acquiring a backup. Wouldn’t it be something if Evgeni Nabokov found his way there? Talk about ironic, don’t you think?

Jonas Hiller (Anaheim Ducks) — It was tough to put Hiller on this list again but honestly it had to be done. Now let’s point to the fact that he gave up nine goals in his last two starts, at home, to the likes of Columbus and Dallas. There is no disrespect to Dallas intended but six goals is six goals. The eight game streak is over and Hiller has run hot, warm, and cold all year. Does he bounce back? Well for the sake of some fantasy teams, he sure better in Week 17. If he does not, Anaheim will go into sell mode at the trade deadline and this is one that cannot be blamed on just the below average defense alone.

Los Angeles Kings lack of scoring depth — This is rare that we go with a team dishonor of sorts but the Kings could not score for Jonathan Quick if their life depended on it. The shots seem to be there but the finish vanishes like a bad B-rated film. Even top liners like Anze Kopitar and Dustin Brown have had their moments along with Mike Richards. If only they had a few more goals, just imagine how many more wins there would be in La-La land. Also, when you need the help of a clock malfunction just to score a third goal then follow it up with two abysmal performances, there is pain and then there is the Kings offense. Approach fantasy players on this team with extreme caution.

Well that wraps it up for this week.  Good luck and hopefully it is a solid Week 17 for everyone out there. There is always the unexpected in fantasy hockey and we hope to always spotlight the expected also. Do not forget to follow us @TheProgramBTR for all your fantasy hockey questions and more.  Thanks again for reading.