Five years ago, the New Jersey Devils relocated from the Continental Airlines Arena (now known as the Izod Center) in the Meadowlands in East Rutherford, New Jersey to the brand-new, state-of-the-art Prudential Center in downtown Newark. The Rock, as it is affectionately known, has now played host to hundreds of regular season NHL games as well as several Stanley Cup Playoff series.

In that time, Devils stars have shined and records have been set. This past season, the uniform number of one of New Jersey’s hockey legends joined two others in the rafters.

So, out of all those games, which moments will live on in Devils and NHL history? 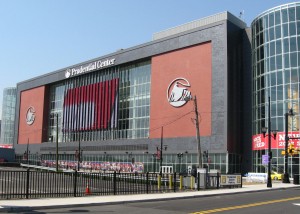 Here are the Devils’ top 10 moments at The Rock.

Doc Emrick, the Devils’ former play-by-play announcer, has been honored in two Mike Emrick Nights at The Rock. The first was on January 30, 2009 against the Pittsburgh Penguins. Emrick had won the Foster Hewitt Award for contributions to hockey broadcasting, and a pre-game ceremony was held in his honor.

New Jersey gave Emrick a night to remember, winning 4-3 in overtime against the Penguins. Jamie Langenbrunner scored twice, including the overtime winner.

On February 24 of this year, Emrick was honored again after announcing the previous summer that he was leaving MSG to work solely for NBC Sports. He had been inducted into the US Hockey Hall of Fame in December of 2011. The Devils lost to the Vancouver Canucks, however, by a 2-1 score. David Clarkson scored the lone goal for the Devils.

The first regular season home game at The Rock was held on October 27, 2007 against the Ottawa Senators. Chris Neil of the Senators scored the first goal in arena history at 5:01 of the second period, and Brian Gionta put the Devils on the board with a power-play goal at the 14-minute mark of the same period. He was assisted by Patrik Elias and Paul Martin. 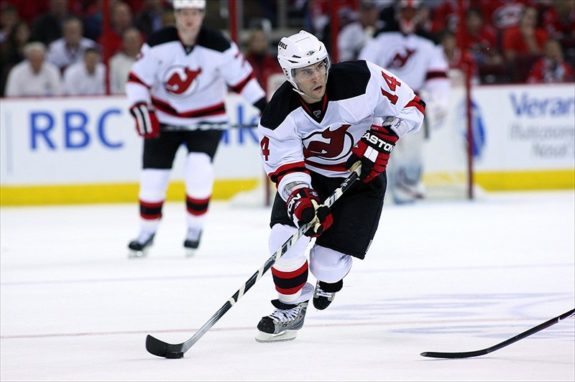 Although the Devils lost 4-1 to drop their fourth consecutive game, a sellout crowd of 17,625 was on hand for New Jersey’s first game of a new era.

On April 11, 2009, the Devils closed out the regular season with a 3-2 win over the Carolina Hurricanes. It was their 51st win of the season and set a new franchise record for most wins in a year. Martin Brodeur made 23 saves in goal, while Brian Rolston posted two points. The win gave New Jersey its fourth win in its final six games.

The Devils finished with a record of 51-27-4 for 106 points to win the Atlantic Division. They also finished third in the Eastern Conference.

Zach Parise put up the first natural hat trick of his career on November 30, 2007, a 4-0 win over the Montreal Canadiens. He scored twice on the power play and assisted Brian Gionta on a third-period power-play goal, ending the night with four points.

The Prudential Center hosted its first Stanley Cup Playoff victory on April 15, 2009, a 4-1 victory over the Hurricanes in Game 1 of the Eastern Conference Quarterfinals. Brodeur needed to make just 18 saves, while Langenbrunner and Parise led the offense with two points each. Just like in 2007, the Devils had a sold-out crowd of 17,625 as they made history.

Scott Niedermayer was the third Devils player to have his number retired on December 16, 2011 as the Devils took on the Dallas Stars.

New Jersey won the game, 6-3, and was led with four points from Parise (1+3). Clarkson, Adam Henrique, Ilya Kovalchuk, Sykora and Elias also scored, with Henrique’s goal coming on a shorthanded chance. It was the Devils’ third win in a row, and it also marked the season debut of forward Travis Zajac, who was coming off an Achilles heel injury.

The Devils beat the Tampa Bay Lightning on October 31, 2007, 6-1, to win their first home game at The Rock. They even broke a four-game losing streak in the process. 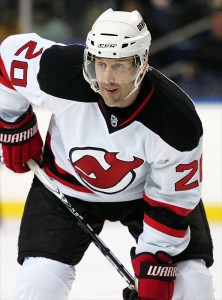 Jay Pandolfo had a hat trick to give the Devils their first win at the Prudential Center over the Tampa Bay Lightning. (Kevin Hoffman-USA TODAY Sports)

Jay Pandolfo had a hat trick for the Devils, finishing with four points, and John Madden tied the mark with a goal and three assists. Arron Asham and Parise also scored, and Brodeur made 21 saves on 22 shots. A crowd of 13,218 was on hand for the victory.

On May 25, 2012, the Devils clinched a playoff series on home ice for the first time in Prudential Center history. They finished off their biggest rivals, the New York Rangers, in Game 6 of the Eastern Conference Finals by a 3-2 score.

Ryan Carter and Kovalchuk scored in regulation, and then in overtime, Henrique scored 1:03 in to the extra frame to send New Jersey to its first Stanley Cup Finals since 2003. Brodeur made 33 saves to send the Rangers packing.

The first Stanley Cup Finals game at The Rock was held on May 30, 2012, but the Devils lost 2-1 to the Los Angeles Kings in overtime OF Games 1 and 2. Anton Volchenkov scored New Jersey’s only goal in the second period, and Anze Kopitar won the game for the Kings.

However, a little over 10 days later, the Devils hosted Game 5 and won 2-1 to cut the Kings’ series lead to 3-2. Zach Parise and Bryce Salvador scored for New Jersey.

Martin Brodeur, arguably the greatest NHL goaltender of all-time, reigned supreme on March 17, 2009 against the Chicago Blackhawks. He made 30 saves to win his 552nd regular season game and break Patrick Roy’s record for most career wins by a goaltender.

The Devils won 3-2, getting goals from Langenbrunner, Zajac and Gionta. Elias also made history on this night, as he had an assist on Gionta’s goal to become the team’s all-time leading scorer. He had 702 points at the time.