We are exactly one week away from the start of the 2018-19 NHL season and within the next 7 days, many of you will be hunkering down and putting the finishing touches on your draft prep before the big day. Fantasy hockey, while not quite on the level of fantasy football, remains a staple of the NHL season and fans simply can’t get enough. If you are looking for a complete rankings list, I would recommend checking out fellow THW writer, David Petrie, and his Top 250 draft rankings. 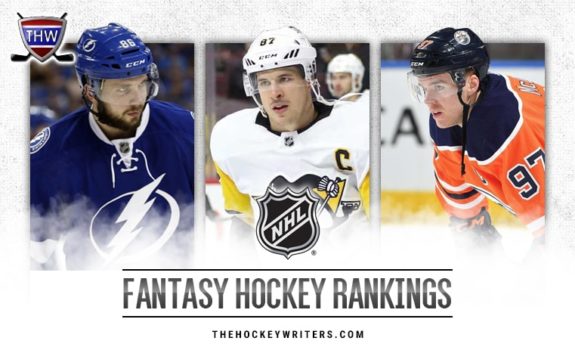 However, for a more focused view on fantasy hockey, here’s a look at a handful of Toronto Maple Leafs players that I believe will be key pieces to your fantasy hockey roster. To start, we must take a look at how the Leafs are expected to fare this season. They ranked third in the NHL in goals for last season, scoring 270. They likely scored so many because, besides talent, they also gave up a good chunk of goals – 230 goals against, 12th most in the NHL. Considering the defensive unit hasn’t solidified itself yet, the Leafs will need to win with high scoring games as opposed to low scoring ones.

The goal mark of 270 is attainable again this season given the talented roster. They have to replace production from Leo Komarov (7-12-19), Tyler Bozak (11-32-43) and James van Riemsdyk (36-18-54) but only JVR is ranked inside the top-100 players, so the loss of Komarov and Bozak shouldn’t hinder the production, especially considering the Leafs added a bonafide star in John Tavares.

After a tremendous rookie year in 2016-17, when Matthews played all 82 games and put up 40 goals and 69 points, expectations were through the roof for his sophomore campaign. Unfortunately, those who were banking on him to take the next step and hit the 80- or 90-point mark were left disappointed as injuries limited him to just 62 games.

He did, however, rack up 63 points with 34 goals and finish with a plus-25 rating. This season, Matthews is healthier and faster than ever according to head coach Mike Babcock and he should be eager to put up legitimate numbers in the final year of his ELC. He will likely play alongside Tyler Ennis and Patrick Marleau to open the season, barring a last-minute contract agreement between William Nylander and Kyle Dubas.

I wouldn’t worry too much about Matthews’ linemates as he is a driving force who will create chances, not to mention the regular power play time he will garner. Obviously, the faster Nylander gets back into the lineup the better Matthews’ fantasy production will be and Matthews should be viewed as a first-round pick. I’d be comfortable taking him as high as the eighth overall selection.

My projection for Matthews this season is 45 goals, 40 assists for 85 points and a plus-23 rating.

Considering the New York Islanders’ poor season, Tavares was still a dominant force offensively. JT played all 82 games, posting 37 goals and 47 assists for 84 points. The Islanders’ former captain will benefit from being surrounded by talented players like Marner who is penciled as his right winger. Opposite Marner, a healthy Zach Hyman will also contribute, as he’s been effective when playing on the Matthews line in the past.

Tavares will likely get plenty of favorable matchups if teams decide to focus in on Matthews. Not to mention, Tavares will also jump right onto the top power unit, assuming JVR’s patented net-front role.

Another reason why Tavares is ranked so high is because he has more talent around him. Marner is a spark plug and was a very big reason why the Leafs were even in the playoff series against the Boston Bruins last year. Playing in the last year of his ELC, Marner should put up legitimate numbers and Tavares owners will reap the rewards.

My projection for Tavares is 40 goals, 50 assists for 90 points and a plus-20 rating. I would be comfortable taking him as high as the sixth-overall pick

As stated above, Marner is playing for a contract and all indications point to an $8 or $9 million deal if he takes the leap from the 69 points he put up last season to the 90 or so points that’s expected of him from Leafs fans and fantasy owners. At the end of the day, Marner led the Leafs in playoff scoring last season and that was playing on a line without Tavares.

If Babcock continues to trust Marner and rely on him and his line in key situations, there’s no reason to believe Marner will have a down year. He wants the puck at all times and the talent around him is enough to put Marner’s fantasy stock higher than it’s ever been. Throw in the fact that he’s a first-unit power play regular and his value in the third round is solid.

I’m projecting Marner to make a leap but fall just short of 90 points. He will score 28 goals and contribute 57 assists for 85 points.

It would be foolish not to mention, arguably, the Leafs’ MVP from last season. Andersen had a tremendous year, appearing in 66 games and notching 38 wins. He also saw the most rubber of any goalie in the league with 2,211 shots against. His goals-against average was higher last year than the 2016-17 season but not by much. This year, Andersen should be able to achieve similar numbers, including a .919 save percentage behind a stronger and more talented roster.

The defense unit in front of him may not have improved considerably but Andersen won’t mind a lighter workload, especially when the Leafs are winning games and comfortably in a playoff position. He is already considered an elite NHL goalie and by some advanced metrics, Andersen has room for improvement.

I’m projecting him to finish the year with 35 wins, a .917 save percentage and a 2.68 goals-against average. Mix in three or four shutouts and you have value with the eighth goalie taken off the board in most Yahoo! drafts.

Much like football stacking, the idea of stacking two teammates together is ideal in a situation where you feel both players can put up hefty numbers. In this situation, you could start by grabbing either Matthews or Tavares late in the first round and then coming back in the second and pulling Marner up the draft board to the late second round.

This would give you legitimate starts at the center and right wing position and then in round three, you could focus on finding the best value, whether that’s a defenseman or goalie is completely up to you. Either way, the Leafs have a roster that you’re going to want to have a piece of. They are one of the most exciting teams to watch on a nightly basis and are well on their way to reaching the top of the NHL in terms of goals scored and points produced.

Hey. I’m Chris. I currently reside in Toronto. Sports – hockey in particular – have played an integral part in my life and I’m excited to be able to put my writing talents to use and write about the sport I love most. Leafs Nation stand up!