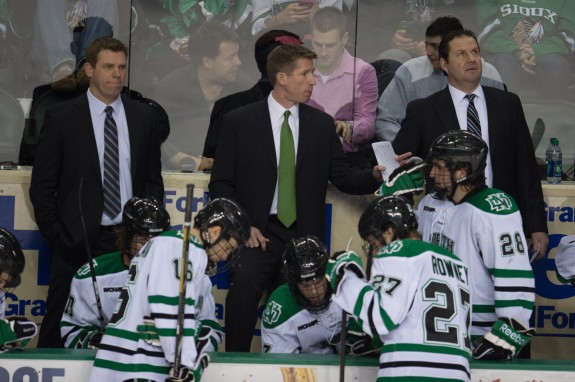 The Wednesday press conference for the University of North Dakota hockey team had some extra energy to it. Not only had the hockey team won three games in a row, but there was a major announcement coming. The NCAA tourney was making a return to the great state of North Dakota.

On Wednesday, the NCAA announced that the University of North Dakota will host the 2015 NCAA West Regional at the Scheels Arena in Fargo, ND. This would be the first time since the 2006 West Regional Championship at the Ralph Engelstad Arena that a NCAA regional championship for hockey, would be played in North Dakota.

UND Athletic Director Brian Faison had this to say about the announcement.

“We’re excited to have to opportunity to host a regional,” Brian Faison said. “We’re looking forward to hosting it in Fargo and working with REA (Ralph Engelstad Arena) and the ScheelsArena staff to put on a good tournament and I think we’ll sell some tickets. “

“Sheels Arena will be a great venue for the 2015 NCAA West Regional tournament,” said UND head men’s hockey coach Dave Hakstol. “It’s a first-class facility that is within driving distance for the fans of several college hockey programs. The atmosphere in the building should be second-to-none within regional competition.”

“That’s pretty cool,” Mark MacMillan said.  “Obviously it’s a great opportunity for the fans. They’re always traveling all over the country to see us play. So it’s nice – it will be close – it’s cool, just an hour trip down to Fargo, there. That rink might be a little smaller than the Ralph (Engelstad Arena) here, but how much support we get here, that place will be rocking.”

“It’s great, especially for the fans,” Luke Johnson said. “They have to travel so far for these types of tournaments. Hopefully we make it.”

The Scheels Arena is located in Fargo, ND, which is located 75 miles from the UND campus. If the regional can’t be in Grand Forks, ND, then Fargo is the next logical location. Also, if North Dakota and Minnesota make the NCAA tourney, it’s a logical location for both teams due to its proximity. It would also guarantee a sellout for that Regional championship. The NCAA likes sellouts. Obviously, both teams would have to make the NCAA tourney. Also, it would be a hostile environment for the teams that had to play UND in that smaller arena. You have to wonder if the NCAA will re-think this one after this regional is over.

The Sheels Arena is too small for the UND fan base. The 2006 NCAA West Regional Championship was a huge success when it was held at Ralph Engelstad Arena. A total of 22,645 fans attended the two day event [box score] [box score]. The Scheels Arena only seats 5,000 fans. If UND makes the 2015 NCAA tournament, there’s going to be a lot of UND fans that won’t be able to go to this game because of the size of the arena.