With professional hockey in Las Vegas barely in its infancy, I would be remiss to dive right in and start reporting on the Golden Knights without first laying the foundation of what an NHL franchise means for this city in context to its illustrious past.

I like to claim that Las Vegas has already undergone five seismic shifts in its evolution to becoming the “Live Entertainment Capital Of The World.” Its history is too rich to cover on one page, but this outline will trace the high points that ultimately led to Vegas becoming what it is today.

The first Native American tribe to inhabit the area was known as the Paiute—descendants of the Tudinu, or “desert people.” These people lived quietly on the land for thousands of years and legend has it, they were known to “roll the bones.” In other words, they were gamblers which surely was a foretelling of things to come. (Actually, they liked to hide bones in their hands and challenge their opponent to guess, but “roll the bones” just sounds so much more gambler-esque.)

Their way of life was snuffed out when Mormon settlers arrived and began converting them, but neither group came up with the name “Las Vegas.” That was conceived by a group of Mexican merchants led by Antonio Armijo in 1822 and it means “The Meadows” in Spanish.

Even though large-scale immigration from the Mormon community didn’t start until 1895, and Las Vegas wasn’t even founded as a city until 1905, I pick the year 1855 as the first seismic shift in its history. That was the year the Church of Latter-Day Saints built a fort in Las Vegas Springs (just west of today’s downtown) that would forever sever the region from its native roots and steer it into the expanding arms of the American empire.

Gambling wasn’t legal in Nevada until 1931, but the year 1930 has to signal the second seismic shift. That’s when President Herbert Hoover signed off on building what’s now known as the Hoover Dam.

The promise of jobs during the Great Depression brought thousands of male workers piling into the region who brought with them a desperate demand for bawdy entertainment, which Las Vegas was happy to provide. Even though the feds tried to keep the workers sequestered in Boulder City, the determined ones found their way to Sin City, where a network of illegal casinos had already been operating before 1931.

This was an epic event because had Hoover not signed off on the dam, there would have been no mass influx of workers, which means no reason to legalize state gambling, which means no Las Vegas—at least as not as we know it.

The Mob Makes Its Move

1946 is the year of the third seismic shift. Mobsters had long been skulking about the local gambling scene but until the post-war boom years, they didn’t actually own any of the hotels. This privilege had been reserved for the feisty few—the old-money families of Vegas who had successfully excluded the east-coast gangsters from their profitable clique. 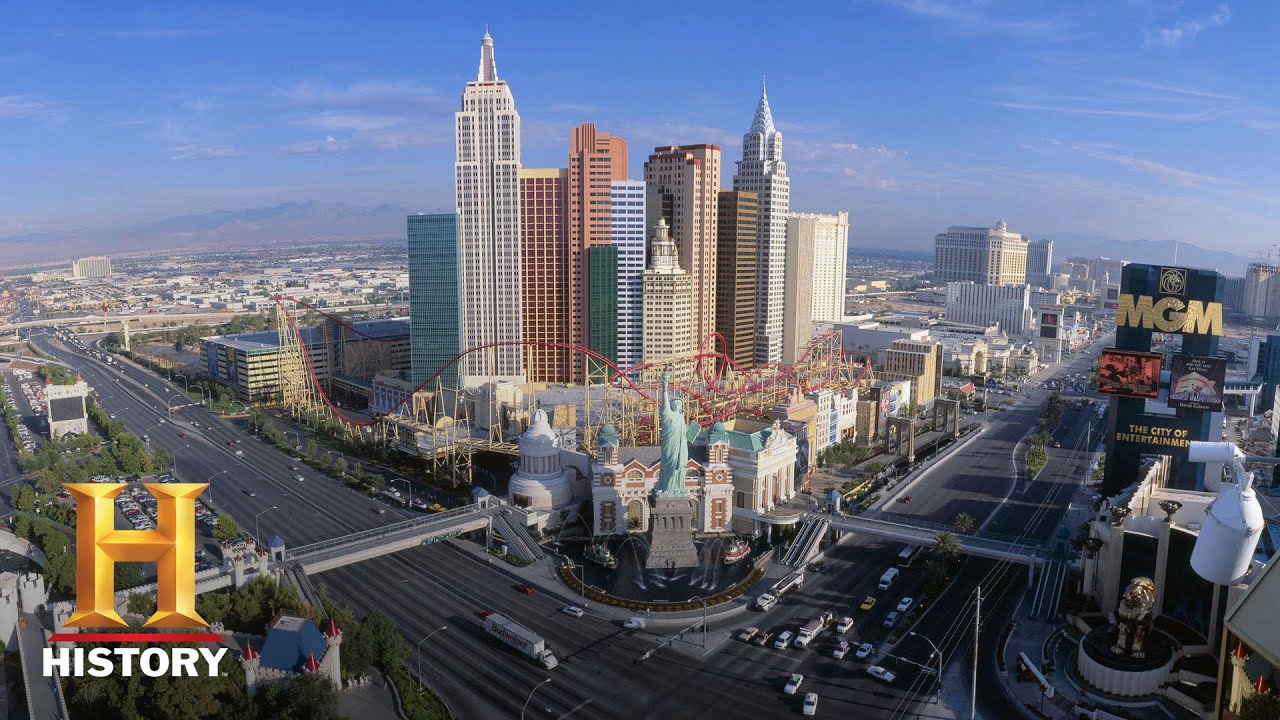 Things changed in 1946 when Bugsy Siegel along with childhood friend and fellow mob boss, Meyer Lansky, finagled their way into building The Flamingo. The Flamingo lost money and Bugsy lost his life, but mobsters who saw the potential began investing in droves. Weaving a tangled web of legitimacy under the cover of Mormon banks and Teamster Unions, the mob soon controlled casinos like the Sahara, the Sands, and the Fremont, happily watching their holdings spread like dots across the Vegas skyline throughout the 1950s.

In 1966, the next seismic shift occurred when Howard Hughes checked into the Desert Inn and never checked out—so to speak. When the staff asked him to leave, he instead bought the joint. With promises of corporate competence moving in to displace mob control, Hughes began a land grab, snatching up prominent hotels throughout the city.

It can be argued whether or not his $300 million worth of purchasing power actually diminished mob corruption or just exacerbated it, but his well-publicized investments went a long way to lending a cosmopolitan air to the city along with a new sense of respectability. Surely, this new facade motivated the more timid types to finally venture out to Vegas to try their own hand at rolling the bones.

Era of the Mega Resort

1989 ushered in the fifth seismic shift as the city began cutting its ties to its architectural past. The stereotypical visage of the casino as a smoke filled, rat-pack haunted, mafioso’s nest gave way to the era of the Mega Resort.

Developer and hotelier Steve Wynn was the first to kick things off with a wad of Wall Street cash that financed the construction of the Mirage. As demolitions of old landmarks soon became the order of the day, aged monuments testifying to a bygone era came crashing down like offerings of concrete and tangled steel to be laid at the feet of their more opulent, family-friendly, and oh-so-tall successors.

The Rio and Excalibur followed the Mirage in 1990, muscling their way into the uncontested airspace, and the rest, shall we say, is history with the latest mega resorts, Encore, CityCenter, and the Cosmopolitan of Las Vegas having been completed in 2008, 2009, and 2010 respectively.

Entertainment Capital of the World?

Los Angeles might have been the first city to coin the phrase, “Entertainment Capital Of The World,” since they produce so much of it. But when it comes to going out on the town, Vegas wins hands down. L.A. has too many nitpicking regulations that kill the fun of live events, and besides, most places close way too early for its resident night owls.

But to avert the risk of offending our Angeleno friends, we can at least contend that Vegas holds an uncontested claim to the title: “LIVE Entertainment Capital Of The World.”

So, what, might you ask, “can Vegas possibly do to secure its title against any and all possible rivals?” So glad you asked, because that leads me to the sixth and latest seismic shift in the city’s compelling history, and that is SPORTS.

The Raiders aren’t here yet, but the Golden Knights have already harvested their crop of talent from the National Hockey League’s expansion draft and will be suited up and ready to play soon.

As testified to by the Mayweather-McGregor fight, the fine line between athletics and entertainment grows ever more blurry, and it’s only fitting that the capital of the latter would add a professional sports franchise to its growing list of offerings.

Want to be part of Vegas history and the first to experience this seismic shift? The Golden Knights play their first preseason home game of 2017 on Tuesday, Sept. 26 at 7:00 p.m. at T-Mobile Arena.