It was a turbulent season for the Washington Capitals.  The Capitals were a team that depended on the powerplay to keep their playoff hopes alive.  The five on five goal scoring was not there most of the season and the defense and goaltending fell apart.  How could everything fall apart for a team who has consistently made the playoffs over the past six seasons?

Let’s take a look at different aspects of the Capitals organization and see where the failures took place: 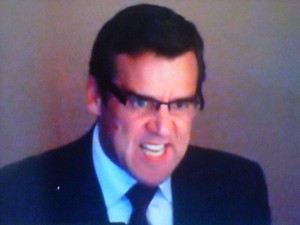 George McPhee has had a long sixteen year tenure as the Washington Capitals General Manager.  Like every other general manager around the NHL, he has had his ups and downs.  He has made some brilliant transactions, but he has also made some flubs.

Dating back to the previous summer, he made a late free agent acquisition of centre Mikhail Grabovski.  It was a brilliant move for McPhee and the Capitals because Grabovski filled a second line centre position that haunted the club for several seasons.

McPhee left some roster spots open at the start of training camp for some of the young prospects to crack the Capitals lineup.  Forward Tom Wilson and defenseman Connor Carrick successfully made the Capitals opening night roster because of McPhee’s deliberate roster decisions.  KHL forward Evgeny Kuznetsov would later join the club in March after he finished up his regular season in Russia.

McPhee made a couple of contract extensions during the season.  He was able to resign forward Jason Chimera in November, and later resigned defenseman Dmitry Orlov in March, with both guys getting two year extensions.

The NHL Trade Deadline week came and and McPhee was a busy man.  On March 4, McPhee acquired forward Dustin Penner from the Anaheim Ducks.  He also traded troubled winger Martin Erat to the Phoenix Coyotes in a four player deal.  The following day on March 5 (Trade Deadline Day), he acquired goaltender Jaroslav Halak from the Buffalo Sabres in exchange for goaltender Michal Neuvirth and former Phoenix Coyote Rostislav Klesla.

So where did McPhee go wrong?  He did not address the Capitals biggest need of the blueline.  The blueline was once again neglected by George McPhee.  There were a few notable names available like Andrew MacDonald, Andrej Meszaros, Stephane Robidas, all of whom were moved during the Trade Deadline week frenzy.  All of these defenseman previously mentioned could have helped the Capitals in their playoff push.

The Capitals blueline has haunted the club for many seasons.  They have been searching for a top four minute munching defenseman who is defensively responsible.  At the end of this regular season campaign, they had three defensemen playing that were rotating back and forth from the American Hockey League.  This will not translate to long term success having three to four American Hockey League level defensemen playing at the NHL level on a regular basis. 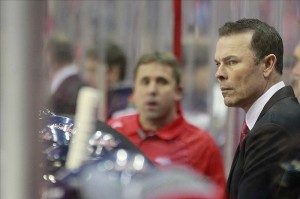 Adam Oates has made some very questionable lineup decisions this year.  Some of his decisions are based out of necessity, but some were to try and provide a spark to the lineup.  Let’s take a look at some of his interesting maneuvers this past season.

This makeshift second line went on for way too long near the end of the season.  Alex Ovechkin and Jay Beagle are two polar opposite players from one another.  This limited Ovechkin’s production at even strength and no goals were scored when both guys played together.  It was a nightmare to watch this duo together.

After the Capitals acquired Penner at the NHL Trade Deadline, what does Adam Oates decide to do?  He decides to play Penner on the fourth line for most of the games down the stretch.  Penner was utilized on the Ducks top line in Anaheim and played with guys like Corey Perry and Ryan Getzlaf.  Penner was brought to the Capitals to fill a top six hole, but did not get a sniff in any of those roles.  It would have been nice to see him experimented with Alexander Ovechkin and Nicklas Backstrom on the Capitals top line.  The big burly Penner can open up the ice and create lots of space for his linemates, something Ovechkin has needed on his line since Mike Knuble departed.

Is it safe to say he might have played a role in running goaltender Michal Neuvirth out of town?  How about the times he threw both Braden Holtby and Jaroslav Halak under the bus for poor performances this season?  The Capitals goaltending was very sub par all season, and Adam Oates did not mind sharing his feelings with the public about the goalies’ struggles.

Oates could never get through to Mike Green and how he wanted him to play.  Green was stripped of his top powerplay duty in favor of John Carlson.

Oates also kept Dmitry Orlov traveling back and forth between Hershey and Washington in the first half of the season.  It took him a few months to realize that Orlov was NHL ready and ready to make a difference.

-Failed to Motivate the Troops

How many games did the Capitals play this season and they looked like they could care to play hockey?  Did anyone ever see Adam Oates get angry on the bench or show any kind of facial expression?

So where did Oates go wrong?  His personnel decisions handicapped the team.  His lack of motivation and lack to spark the Capitals in games also led to the demise of the Washington Capitals.

This game against the Dallas Stars was chosen because it sums up the Capitals season the best.  Poor defensive play, poor goaltending, poor effort, and lack of scoring.

The Washington Capitals were ranked 13th best in the NHL at goals forced with 2.74 and 21st at goals against with 2.79.  They also gave up the fourth most shots in the NHL at 33.5 shots against per game, just behind Buffalo, Ottawa, and Toronto.

Alex Ovechkin will add another Rocket Richard Trophy to his trophy case as he led the NHL with 51 goals.  Nicklas Backstrom led the entire NHL in powerplay points with 44, while Ovechkin was right behind him with 39.

The Capitals third line was a bright spot of the roster for most of the season.  The trio of Jason Chimera, Eric Fehr, and Joel Ward provided the Capitals with some much needed secondary scoring.  Joel Ward had a career season with 24 goals and 49 points.  Jason Chimera had a career best 42 points, while Eric Fehr made the conversion from winger to centre and had tremendous success with the move.

So what went wrong with the Capitals roster?  The Capitals blueline gave up a lot of shots this season.  The goaltenders were subpar at best for most of the season as they continued to let in some squeaky goals.

The second line was an interchanging line for most of the season.  Mikhail Grabovski, Troy Brouwer, Brooks Laich, Jay Beagle, Evgeny Kuznetsov, Marcus Johansson, and even Alexander Ovechkin took some shifts on this second line.  This line was a mystery for the Capitals all season as they continued to try a combination that could work.

The main thing that was troublesome with the Capitals roster was the tendency to blow leads and the lack of motivation.  They blew several games to division rivals this season – the Capitals only won twelve games against the Metropolitan Division.

What Changes Need to Come?

The Washington Capitals are a fragile club today.  When you make the playoffs for several seasons and suddenly do not make it, all aspects of the organization get put into question.

The General Manager, Head Coach, and players are all responsible for this poor season in some sort of fashion.  This writer feels it is time for a new coach and new general manager.

The Washington Capitals are a few pieces away from being a Stanley Cup favorite again.  The blueline needs major attention and the Capitals could use another big time scoring forward to alleviate some pressure off of Alexander Ovechkin.  This fragile Capitals club needs to get tougher mentally and they need the proper leadership to make them win hockey games.  This writer feels that the Capitals need a bench boss who can kick the team in the rear end and give them the proper motivation when they are not playing well.  If they can fix these two areas of the organization, the club should be back into playoff contention and back fighting for a Stanley Cup.