The Philadelphia Flyers have some great young forwards on the roster and even at age 26, Wayne Simmonds is still considered young. 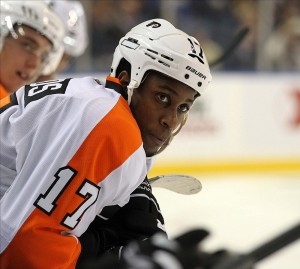 He started the season on a tear, but as all hot streaks end, a slump began for Simmonds. He finished the season with 28 goals, 22 assists (50 points), was a minus-five skater, 166 hits and he accumulated 66 penalty minutes.

What Does Wayne Simmonds Do So Well?

He is not a scoring champion, but he can shoot the puck with the best of them. Simmonds is not the biggest hitter, but he can throw his body around.

What Wayne Simmonds does better than just about anyone in the league is he’s an aggressive player (and aggressive in the good way). He stands up for teammates, he swings the momentum of games with big hits and he’s what one would consider an ideal Flyer to be.

Simmonds is a leader, he’s determined and has already claimed the Flyers will return to playoff contention next season.

We definitely think we have a playoff team, we definitely have the skill, the talent, we just had too many inconsistencies this year. You know talking to all the guys, everyone is extremely disappointed and this can’t happen again. I’m going to strive to get better, that’s the name of the game. The Flyers have a great history, every time you put on that jersey you should wear it with pride. Obviously this is not acceptable and it can’t happen again.

Simmonds has developed into one of the most vocal and passionate leaders in the Flyers locker room and he truly wants to improve in every way possible.

While his 50 points were a great accomplishment, there has been criticism of Simmonds’ even strength play. Some even claim that his statistics were inflated by the his phenomenal performance on the power play.

He was ranked as one of the six most overrated players in the NHL and  Jimmy Hascup, the author, does bring up an excellent point. At the time of writing, 43 of his 90 goals over the last four years, had been on the powerplay.

What is quite interesting is that Simmonds’ production at even strength has actually fallen for the last six seasons.

Given how hard he works and wants to improve, there’s a very good chance that this trend could be reversed next season. Especially when you consider he plays with some of the best forwards in the league (Claude Giroux and Jakub Voracek).

Currently, Simmonds has four seasons remaining on a six-year contract that has an annual cap hit of $3.975 million.  If Simmonds can hone his even strength play, Philadelphia will have quite a bargain of a contract and he could help push them back into playoff contention.