The year was 2004.  A youthful Brad Richards had just been a crucial cog in a Stanley Cup winning team. That team, of course, being none other than the Tampa Bay Lightning, who had just captured their first league championship in franchise history.  As a non-traditional market, the scene was purely euphoric as the Lightning skated to Game seven victory on home ice over Canada’s Calgary Flames to capture the Stanley Cup.

This was in no small part due to the performance of Richards, who was awarded  the Conn Smythe Trophy as the playoffs’ most valuable player for his efforts.  At the time, Richards was part of a young core in Tampa Bay that looked poised to ensure that this championship would not be the last the hockey world would hear from the Tampa Bay Lightning of the mid-2000’s. They led the Eastern Conference in goals that season. They won their division, and they captured the top seed in the Eastern Conference.

Richards had just turned 25 in June of 2004, and he, along with Vincent Lecavalier (25) and Martin St. Louis (29), were a force to be reckoned with as three elite forwards carrying a team.  But as so often is the cruel reality of hockey or any other sport, sometimes things do not work out as they are supposed to. Coming out of the 2004-2005 lockout, the Lightning were nothing but a footnote in their quest to defend Lord Stanley’s Cup.  They barely sneaked into the playoffs as the eighth seed, and were unceremoniously dispatched in five games by the mighty Ottawa Senators.

During the 2007-2008 season, Richards was dealt to the Dallas Stars. He stayed on with Dallas for three full seasons, and he saw some of the most productive years of his career in Texas.  The 2009-2010 season was particularly successful for Richards, who produced a career-high 91 points in 80 games. He followed that up in 2010-2011 with 77 points in 72 games.

But Dallas failed to qualify for the NHL playoffs in any of Richards’ three full seasons with the team.  Richards was growing weary of not playing for a contending team, and with his contract expiring following three lacklustre campaigns, Richards chose to pursue a huge contract on the open market. 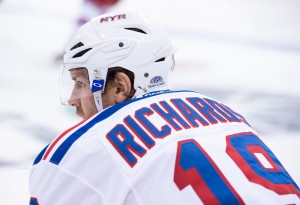 As they have been wont to do so many times over the years, it was no surprise that the New York Rangers were to be one of the biggest favourites to land the biggest name in the free agent market. The case of Brad Richards was no different.

The Brad Richards sweepstakes was a highly drawn out process.  Numerous teams sent executives to visit Richards’ camp, including the Kings, the Maple Leafs, the Canadiens, the Sabres, and the Lightning. The Rangers didn’t though, as with boatloads of money and Richards’ former coach from Tampa Bay, John Tortorella, behind the bench, it was almost a foregone conclusion that Richards would be a Blueshirt come October.

And so it would be, as Richards agreed to a nine-year, $60 million contract to bring him to the Big Apple.  Richards was unfairly maligned in New York.  He was seen as a huge disappointment merely because he was the owner of a contract he could not possibly live up to.  Despite this, he never played at a pace below 50 points in any of his three seasons as a Ranger.

Richards was bought out by the Rangers following their 2014 run to the Stanley Cup Final, and on July 1st he was free to pursue a contract on the free agent market once again.

The Rich Get Richards

Having learned from the mistakes he made in his last go-round on the free agent market, Richards sought a low-risk, short-term contract from a contending team. He got his wish when the Chicago Blackhawks came calling, offering him a guaranteed spot on the second line next to Patrick Kane and a prime opportunity to contend for another Stanley Cup.

Obviously this has turned out to be a great fit for both parties.  For the Blackhawks, Richards represents a huge upgrade in the second line center spot from what they had utilized in that role recently. For Richards, he gets to play behind Jonathan Toews and next to Patrick Kane in a role that comes with much less pressure than the one he had occupied in New York.

Richards recognizes that his career has taken a strange path. He’s come a long way since he was a 25-year-old Stanley Cup champion and Conn Smythe winner. The fact that the current instalment of the Tampa Bay Lightning has no players left from the 2008 team that Richards was dealt from probably makes it even more strange. It certainly signifies just how much time has passed since Richards donned the black and blue sweater.

It definitely has been a long time, and many changes have taken place in Tampa Bay. The logo is different. The jersey is different. The name of the arena is different. The management team is different. The roster is different. And yet, despite all of these things, something feels the same. Eleven years after Richards, Lecavalier, St. Louis, and Dan Boyle led the Tampa Bay Lightning to glory, it’s now a young, electrifying core of Steven Stamkos, Tyler Johnson, Ondrej Palat, and Victor Hedman doing the exact same thing.

Maybe it’s almost like looking into a cross between a time machine and a mirror for Richards.  Potential Conn Smythe winner Tyler Johnson is 24 years old, and should he go on to capture the Smythe, he wouldn’t be the first smallish, creative playmaking center in his mid-20’s playing for the Tampa Bay Lightning to do so. On the other hand, I’m sure Richards wouldn’t mind celebrating his second Stanley Cup championship in the same building in which he won his first.  It’s just that the feel would be the polar opposite of what it was the first time.