This is the sixth edition of weekly roundup. In this article we take a look at the last seven days of hockey in the NHL. The article will focus on players who have been putting up solid numbers and are likely still available in fantasy pools. We also look at the stars of the game who aren’t getting on the score sheet for their team.

Purcell has been playing great hockey as of late, scoring six points in his last three games the Oilers. He is showing great chemistry on the top line along with Leon Draisaitl and Taylor Hall. Purcell looks like he will be sticking with this line for a while, as struggling teammate Jordan Eberle has found recent success on the second line with Ryan Nugent-Hopkins.

With both of these lines producing, it would not make sense for them to be split up. Purcell has 19 points on the year in 31 games, nearly a third coming in the last week. Purcell and the Oilers are on a six game win streak and any players from their top six are worth adding to your roster for the time being.

The 22-year-old Rask has 22 points in 30 games this year, seven of which have come in his last four. He is currently centering the third line alongside speedy winger Jeff Skinner and is also playing on the first power play unit. He is on pace for 60 points which would nearly double his rookie campaign totals of 33 points in 80 games from last year. He may not sustain that pace for the whole season, but looks to be on a roll right now. 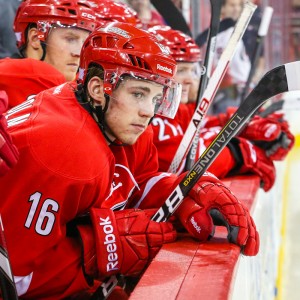 A teammate of the aforementioned Rask, Lindholm had a slow start to the season with only two goals over his first 20 games. That is long gone now as he has been on fire for the Canes posting 11 points in his last 12 games. The former fifth overall pick from 2013 managed 39 points in 81 games last year and has a chance to improve on those numbers.

He is currently playing on the first line as well as the first power play unit. His slow start may have kept fantasy owners away, however he has been on a point per game pace for quite some time and is worth a pick up in all leagues.

Kessel and the rest of the Penguins forwards have struggled to find the back of the net this year – Photo By: (Jerome Miron-USA TODAY Sports)

The biggest off season move by far surely had many people thinking that Kessel and Crosby would be the best combination in the NHL this year. This has simply not been the case as the Pens have struggled to put the puck in the net this year. Kessel only has 18 points in 29 games this year and hasn’t scored any points in six of his last eight games.

The Penguins made a big move firing head coach Mike Johnston and replacing him with former Penguins AHL affiliate Wilkes Barre/Scranton head coach Mike Sullivan. They hope that a new coach and leadership style will help the Penguins struggling offence find the back of the net. This didn’t happen in Sullivan’s first game as head coach when the Pens lost 4-1 to Washington.

Kessel should be able to put up solid numbers over the course of the year, but his stats are underwhelming for a player of his calibre and given who is playing with.

Tavares is on a bit of a cold streak only producing three points (all of which have been goals) and a minus four rating in has last eight games. Tavares is still a star calibre player who is just going through a rough patch. Look for him to pick it up very soon. Owners should not be concerned as he still has 23 points in 28 games this year.

Toews has always been a fantastic player, known for his play at both ends of the ice. While his positional play continues to be stellar, his point production this season has dipped from his pace of years past. Toews, who has managed nearly 70 points in both of his last two seasons is currently on pace for 45 points with 17 in 31 games. He only has 3 points in his last 10 games. Owners in keeper leagues may be getting frustrated with Toews performance as of late, however he is a star player on an extremely talented hockey team and his numbers should pick up. Don’t give up on him just yet.

Tune in next week as we look at the who’s who in fantasy hockey.