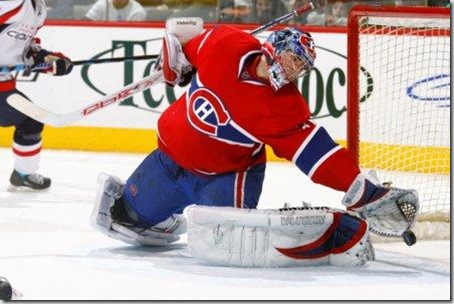 To put it lightly, the 2011-2012 campaign could have gone better for the Canadiens. More accurately, it was an unmitigated disaster. The Habs finished dead last in the East just two years after reaching the Conference Finals. With new GM, Marc Bergevin, now at the helm, there’s already reason to believe the Canadiens can make a speedy turnaround and maybe even crack the playoffs in the coming year.

It’s hard not to make excuses for the Habs’ failures last season. For starters, the prolonged absence of star defenseman Andrei Markov, coupled with the loss of veteran Roman Hamrlik to free agency, left the team light on experience at the back end. Losing other veteran defenders like Jaro Spacek and Hal Gill didn’t help matters much. Adding to the confusion, former coach Jacques Martin seemed incapable of setting a stable line-up for Montreal, giving role players like Mathieu Darche prime time on the power play. Meanwhile Erik Cole, ultimately the team leader in PP goals, was left scratching his head on the bench.

Martin was let go in December but his interim replacement, Randy Cunneyworth, didn’t receive much in the way of support from management. Not surprisingly, Cunneyworth lost six of his first seven games as head coach, and the Canadiens began to lose hope of making the playoffs.

Flash forward to this summer and already things are looking up in Montreal. Markov is healthy, so is captain Brian Gionta, who missed over 50 games himself last year, and the team has a capable coach in Michel Therrien, all of which should go a long way in stabilizing the locker room.

On the ice, the Habs will welcome newcomers Brandon Prust and Colby Armstong adding size and grit to a Canadiens team that had become known for being small, especially up front. First round pick, Alex Galchenyuk, is another big body that will give the Habs some much needed size at the center position, but don’t expect him to see too much action in the NHL for at least another season.

One of Bergevin’s most important tasks this summer was re-signing goalie Carey Price, locking down the young netminder for the next six years. Price will be a key component to Montreal’s playoff chances, and while his record last season of 26-28-11 leaves much to be desired, his .916 save percentage probably merited better results. Bergevin has yet to re-sign P.K. Subban but if the 2012-2013 season starts on time expect P.K. to be in the line-up.

On paper, the Canadiens roster hasn’t changed much, the newfound stability in management will go a long way towards improving their performance. Former GM Pierre Gauthier became notorious for his unparalleled sense of timing: firing assistant coach Perry Pearn hours before a game last October, removing Jacques Martin the morning of a game less than two months later, and most bizarre of all, trading Michael Cammalleri during the second intermission of a game against the Bruins in January with the Habs trailing 1-0. If volatility can be kept to a minimum in the coming year, the Canadiens are sure to have better results.

To be sure, the Habs will have their work cut out for them, within their division the Bruins, Sabres and Senators are all poised to have strong seasons, providing the Canadiens with ample competition. If Toronto can find some solid goaltending they could be a threat too this season. The rest of the East will be as tough as ever and Montreal still looks to be a step behind the conference’s elite teams like Pittsburgh, Philadelphia and New York.

Galchenyuk could eventually be the missing link the Canadiens need to move up to the next level, but for now they must make do with Tomas Plekanec, David Desharnais, Scott Gomez and Lars Eller at center, not exactly the most fearsome foursome down the middle. Much of Montreal’s success could depend on Gomez, who has all but worn out his welcome in the hockey hotbed after a pair of underwhelming seasons. Gomez has shown himself to be an elite player in the past, and at 32 he should still have something left in the tank to help his team.

If there is a 2012-2013 season, the Canadiens should be in the playoff mix, but making the postseason will be a challenge. After such a disastrous season last year, fans should probably be happy if the team is even in the playoff conversation come the trade deadline, anything after that is a bonus.

Rob has been blogging about the Habs since 2011 at MontrealHockeyTalk.com and can usually be heard before every Canadiens games on the MHT Pregame Show.