Sunday’s overtime victory over the Edmonton Oilers can be considered a bit of an anomaly. Since the new format was put in place, three-on-three has been a major thorn in the side of the Minnesota Wild as they are currently 3-11 overall in such contests.

No Offense From Defense

While it would be very difficult to pinpoint an exact reason for Minnesota’s overtime struggles, you could easily cite the lack of a top-tier defenseman who is a legitimate threat with the puck on his stick. This essentially leaves any three-player combination the Wild throw on the ice “shorthanded” in a way.

Ryan Suter is unquestionably the Wild’s best blueliner, but his style of play is better suited for even strength hockey. Even in a season where he is on pace to surpass career highs in points and goals, his value is more tailored as a workhorse on the defensive side of the puck.

Continuing down the roster to other overtime regulars Matt Dumba, Jared Spurgeon, and Jonas Brodin, other issues arise. Dumba has upside but remains untrustworthy and erratic in such a chaotic format. Spurgeon, on the other hand, won’t be able to create his own shot due to his size. Not to mention, I don’t think I’ve ever seen him lead an odd man rush in his career. Meanwhile, Brodin is enjoying some offensive success, but makes his money on the other end of the ice.

Needless to say, when the defense isn’t a threat to add offense, three-on-three is not going to be friendly.

The theory I personally subscribe to is that the Wild lack any real superstars at all. Other teams have the luxury of relying on one or two guys to make a play on their own, typically coming in the form of blowing a shot past the opposing goaltender.

As evidence, take a look at Minnesota’s game against division foe, the Dallas Stars, that went into overtime on Nov. 21.

It was certainly a woeful pass by Mikko Koivu that lead Mikael Granlund directly into Tyler Seguin, but consider that Jamie Benn, arguably the best overall player on either team, only needed to touch the puck once the entire overtime before he rifled it past Darcy Kuemper to earn the extra point. It’s not a pretty passing play, just a simple breakdown and letting Mr. Benn do what he’s known for doing.

A review of footage from the Wild’s game against the New Jersey Devils in Oct. 22 reveals basically the same thing. A turnover by Granlund, defensive miscommunication on the rush, one chance for the biggest offensive threat for either team and the game was over.

A Strategy to Consider

From start to finish, here is the entire overtime period from Sunday’s game.

Despite winning, I wouldn’t consider what you just watched to be a three-on-three clinic. Granlund made a pair of high-risk passes early, the second of which resulted in a turnover and forced him to defend for over a minute while he was clearly exhausted.

Rely on the Rush

What I would suggest is a heavy emphasis towards attacking the rush as opposed to being concerned with the amount of time spent in the offensive zone. What many teams in the NHL do, including the Wild, is coast around the zone simply hoping for something to present itself. Instead of forcing passes, giving up the zone, regrouping the puck, and attacking again with speed.

Zach Parise does exactly that at the 2:17 mark of OT and less than 10 seconds later he is the recipient of a Jared Spurgeon stretch pass for a breakaway. 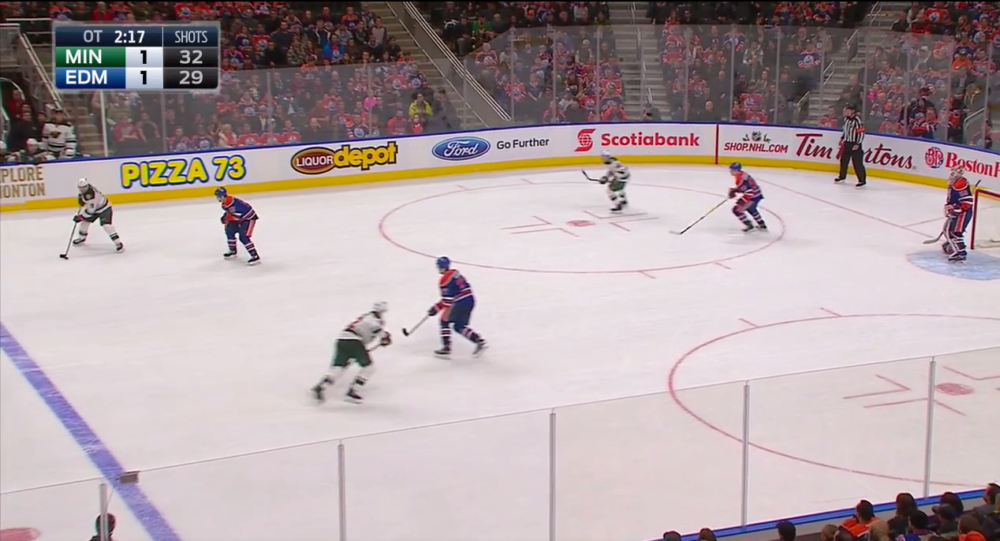 Parise gives up the zone as opposed to crawling parallel to the blue line. 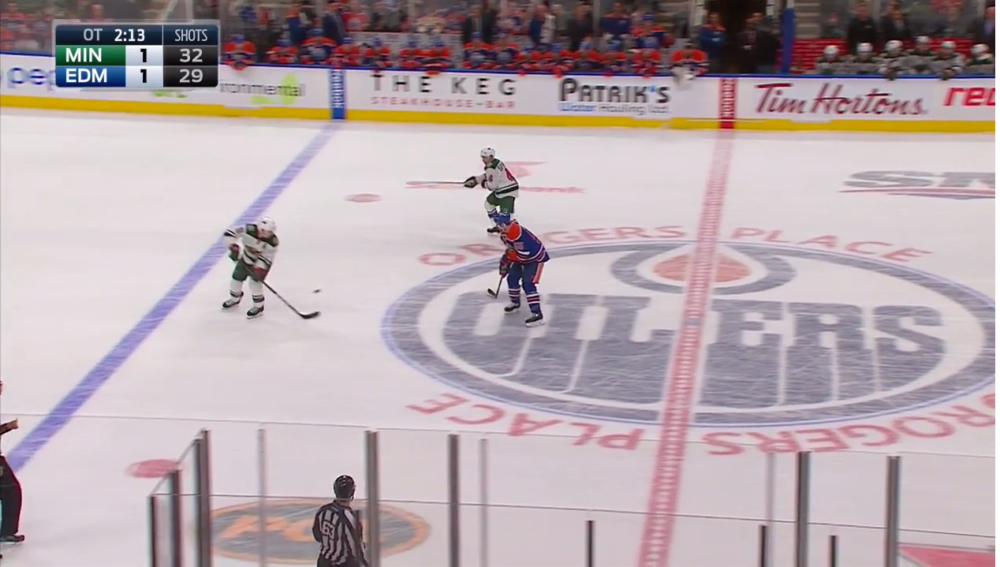 Regrouping in the neutral zone pulls the defense away from the net as Parise drops to Spurgeon. This also opens a lot of ice and options. 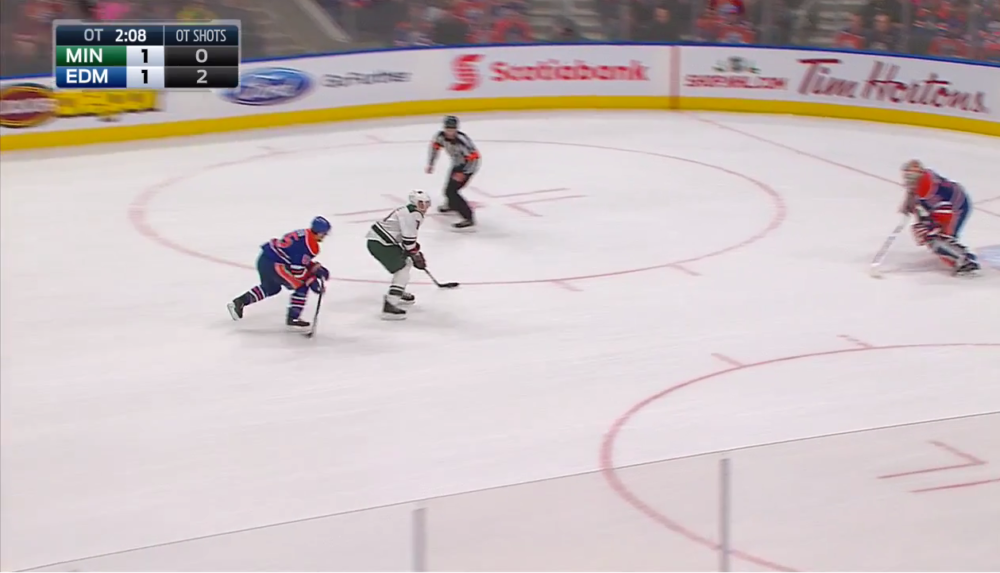 Parise torches Mark Letestu through the neutral zone and gets the breakaway on Spurgeon’s stretch pass.

That entire play was constructed because Parise was patient enough to bring the puck out of the zone and wait for support to arrive.

With a roster as fleet of foot as Minnesota’s, slowing to a complete stop is never advantageous, especially in the corners. Early in the period, Jonas Brodin willingly brought the puck into the corner and entered into a risky puck battle. 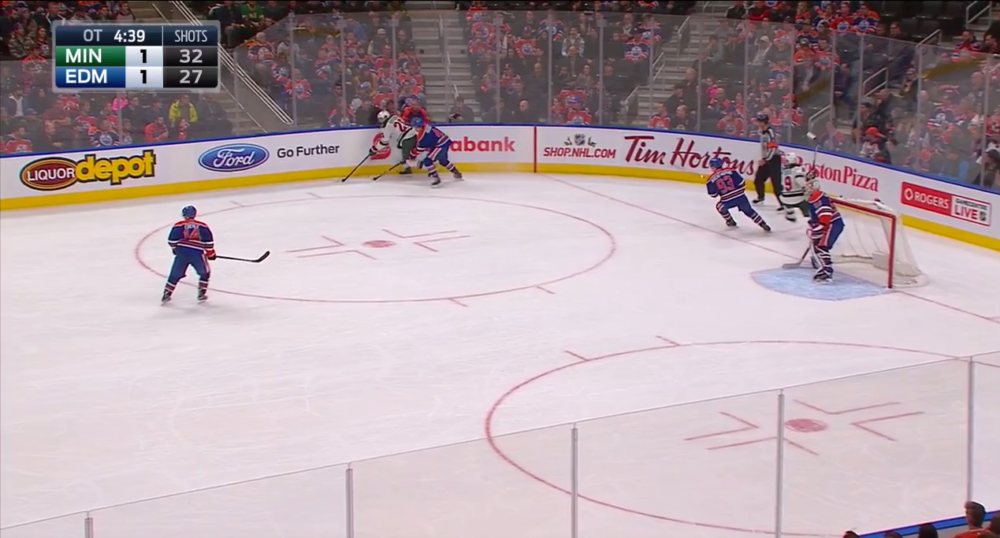 Any turnover here sends Edmonton back the other way on what would undoubtedly be an odd man rush. Simply put, keep the entire rink in front of you, if possible, and keep 360 degrees of ice around you to open up options and escape routes.

Now, I’m not an NHL coach and it can be argued that three-on-three is just a crap shoot affair where timing and talent are equally important. Things have been brighter this season as Minnesota is a modest 2-2 in OT. I’m not asking the Wild to reinvent the wheel, just use the strength of the roster, which coincidentally is having wheels.