Last week’s news of the loss of Patrick Kane was certainly not welcome for Chicago Blackhawks fans. The Hawks had just squeaked through the Olympic break, bringing home 3 gold and 3 silver medals, and more imporantly, all 10 Olympians returned un-injured. They appeared ready for the sprint to the finish and seemed nearly 100% healthy. 22 games to go and nothing to stop them from catching the Blues for the first spot in the Central Division, as well as possibly the entire Western Conference.

That is, until the Hawks started thrashing the Blues in Chicago. With the Hawks up 1-0, Patrick Kane was hit awkwardly and stricken with the dreaded “lower body injury.” On the ice, Kane clutched at his knee before getting up and ignoring the play around him as he gingerly skated off. The look on his face tells the story.

Patrick Kane is likely out for the rest of the regular season. Without him, can the Blackhawks remain where they are? Will they fall below Colorado? Will they catch St. Louis? With the way they have been playing without him (currently 2-2 without number 88), the answer to all of these questions may be a resounding no.

With about a tenth of the season remaining, the Blackhawks are reaching that “critical mass” stage. With home ice advantage on the line, here are a few facts about the remaining 8 games:

So this begs the question. While we know he cannot truly be replaced – who else in the NHL has those hands? – who is going to step into the vacancy left by Patrick Kane, score a few goals and carry the Hawks into the playoffs? 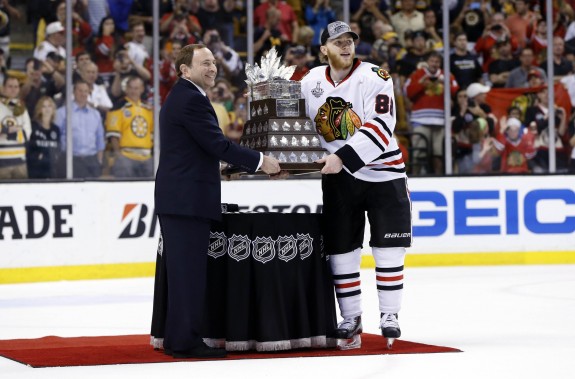 Peter Regin has been a welcome late-season addition to the regular lineup for Head Coach Joel Quenneville. In 11 games, Regin has 2 goals and an assist on 13 shots. Although Joakim Nordstrom started strong at the start of the season, I won’t expect the Hawks to bring him back this season and burn a year on his NHL deal.

Jeremy Morin is another nice forward that has played in 18 games so far this year. I’d expect he will stay with the big club, rather than being sent back to AHL affiliate Rockford where he had 58 points in 67 games this season. Sheldon Brookbank has played about half his games on defense and the other half as a forward this season. An interesting deployment for sure, but I don’t think Brookbank is the answer here either. 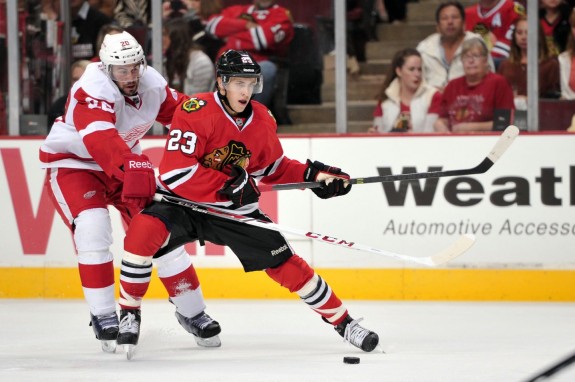 Teuvo Teravainen (wearing #23) is possibly the most adept replacement for Patrick Kane down the stretch. (Rob Grabowski-USA TODAY Sports)

The obvious answer to the “who can replace Kane” question is the newest arrival in Chicago. The early returns have been mixed on Teuvo Teravainen. It certainly isn’t that he has played poorly, but in his first 2 games, Tuevo has garnered more quotes than on-ice production. He has no shots, no points, and nothing to show for his NHL debut to date. Fellow THW writer Andy Dudones agrees that perhaps the expectations for Teuvo are just too sky high to begin with. But there are some promising signs, such as the perfect 7-for-7 performance he laid down in the faceoff dot against Dallas (Chicago was a staggering 49-22 for the game).

Perhaps Teuvo is the answer and he will start lighting it up over the last 2 weeks of the season while Patrick Kane recovers. Maybe it’s Regin or Brookbank, or maybe even Bryan Bickell comes back and regains his 2013 Stanley Cup Playoffs form. What I’d truly like to see is the team effort that Chicago showed in 2013. Every game had a different hero and just as it was in game 6 of the Stanley Cup Finals, you didn’t know where the big goal was going to come from. That is Blackhawks Hockey, and if there is One Goal in mind once again, the Hawks need to iron a few things out over the last 2 weeks of the season as they head into the playoffs.