Entering the season as a top-30 prospect for the upcoming 2013 NHL Entry Draft, left winger William Carrier saw his stock drop largely because of a high ankle sprain suffered on December 14th, 2012, that forced him to miss the remainder of the 2012-13 campaign.

Prior to the injury, Carrier had recorded 16 goals and 26 assists for 42 points in only 34 contests with the lowly Screaming Eagles. In the process, Carrier posted a disappointing -14 differential with 41 penalty minutes. Those great numbers are largely due to his blazing hot start as Carrier had 15 goals and 40 points in his first 24 games, being held pointless in just two games before eventually ending his season with just two points in his last 10 games. He also participated in the Super Subway Series against Russia back in November 2012.

Overall, in 161 games in the QMJHL, Carrier has scored 51 goals and 73 assists for 124 points to go along with a -52 plus/minus differential and 160 penalty minutes. Drafted 61 overall in the fourth round of the 2010 QMJHL draft, Carrier made his junior debut in September 2010.

Carrier struggled out of the gate in the Q, recording a paltry 12 points in 61 games with Cape Breton at the ripe age of 16 after playing only three games in Midget AAA. He followed his rookie season with a much-better sophomore campaign, notching 27 goals and 43 helpers for 70 points in 66 games for the Screaming Eagles.

The lower-body injury he suffered in December forced him out of the Top Prospect game, thus preventing him to impress NHL scouts and improve his draft stock in prevision of the next NHL Entry Draft. The Montreal product started skating again in early March, but he did not see any game action before Cape Breton finished up the year and was eliminated from playoff contention.

Last summer, Carrier lost some weight to improve his foot speed, helping him to get off to a very quick start this season. The youngster also turned to power skating coach Julie Robitaille for six weeks in Trois-Rivieres to make his feet faster. Robitaille is well known in NHL circles for helping players like Marc-Andre Bergeron, Mike Ribeiro, Guillaume Latendresse and others. Carrier also put emphasis on leg strength in the off-season, looking to improve on his start-up and acceleration speed.

Carrier likes to approach defensemen at top speed as he attempts to barrel over them or around them much like Max Pacioretty. He uses his large frame to wear down opponents along the boards in order to create space for him and his teammates in the offensive zone. He is not afraid to drive, the net looking for rebounds and trying to create turnovers.

The powerful winger uses his booming shot efficiently and accurately, whether with a wrist shot or a slap shot. His swift hands also allow him to stick handle the puck with great ease, manoeuvring in tight spaces and around defensemen. A leader on and off the ice, Carrier is wearing the “A” for the Screaming Eagles as he gives his 100% every shift and rarely takes a night off.

On the downside, Carrier will have to use his teammates better as he has a tendency to try to do too much on his own on the ice. He needs to lift his head more to feed his open teammates instead of dying with the puck in the corner or create a turnover trying to deke too many opponents.

Finally, Carrier, who is currently rated as an “A” prospect by the 2013 CSS Preliminary rankings, will have another chance to impress scouts at the “combine” prior to the NHL Entry Draft. A poor man’s Erik Cole (minus the skating), he will have to prove NHL teams that he can get his game to the next level and produce on a constant basis despite the long-term injury he suffered this season.

“He’s a solid prospect, a guy that projects as a solid 2nd line NHLer. His skating was a pretty big issue last year, but he was moving better this year until the injury. He plays bigger than his size, not a big banger but will compete for pucks and is hard to knock off it. He has good poise and vision with the puck, above average hands. Not a huge upside (will probably never be a point-per-game NHLer), but a very safe pick with a bit of upside (50-70 points).” Follow Yves from Twitter @MonctonScout

“Perhaps one of the benefits of his late 1994 birthday is that William Carrier already had two years of experience in the QMJHL and was already on the radar of some teams prior to his draft year. But in any case, missing the last half of his draft year is a significant blow to his stock, especially considering the state of the Screaming Eagles during the first half of the season. Carrier was asked to do it all in Cape Breton and he competed hard on the ice, even in difficult circumstances. A big forward with offensive skill, he sometimes fell suspect to trying to do too much, which might have had a bit to do with his supporting cast. He uses his frame well, isn’t afraid of taking punishment in the corners or in front of the net and can set up a play as easily as scoring a goal, but needs to improve his skating. Overall, he’s a solid player who could slide because of the missed time.” Follow Kevin on Twitter @kforbesy. 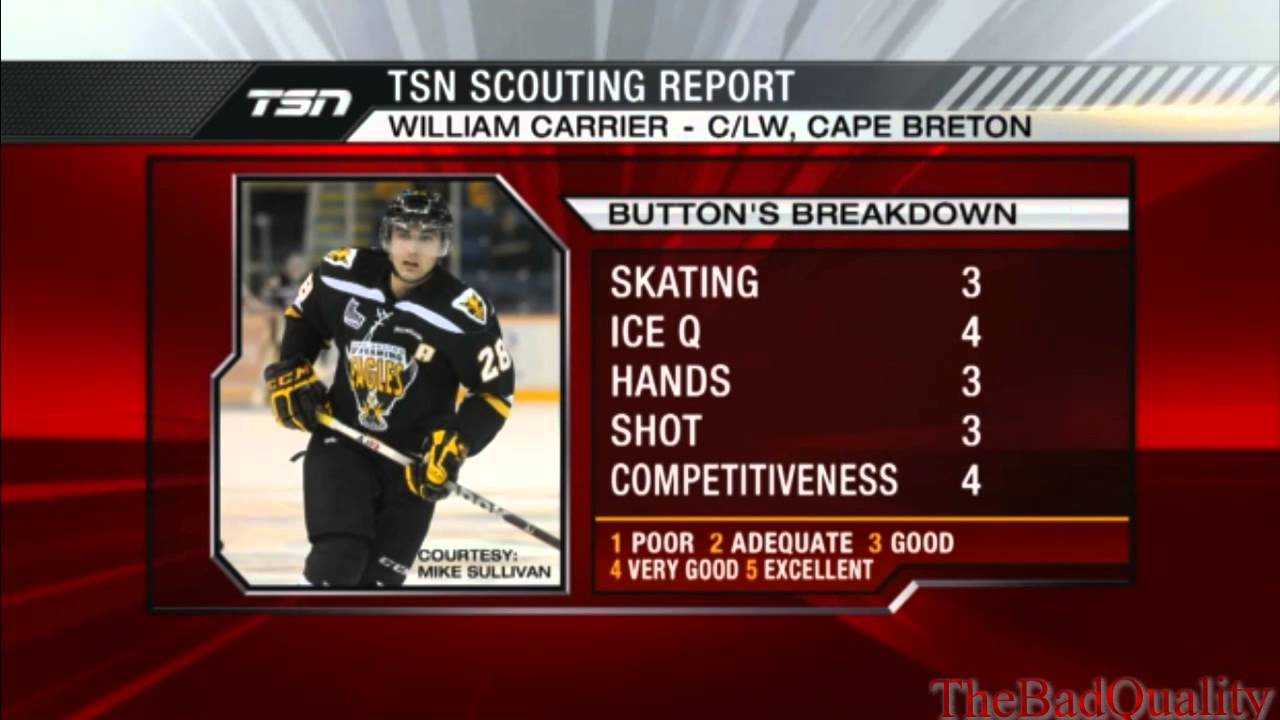