During the ensuing media cycle, General Manager Jim Benning and President Trevor Linden talked about the style of hockey they want to feature every night. Desjardins also chimed in on how he wants his team to play:

“We want to be an entertaining, high-paced, fast team.” – Desjardins

What does Willie Desjardins imply by “entertaining” and “high-paced”? When looking at his former coached teams, it’s easy to figure out.

The Vancouver Canucks will run a transition, high-pressure and cycle heavy style of hockey. Willie Desjardins successfully deployed these tactics during his previous tenure with the 2013-2014 Texas Stars of the AHL.

Notice the 5:08 and 10:50 minute marks specifically. They show the type of transition hockey Desjardins will use in Vancouver.

At 5:08, as soon as the St. John’s IceCaps turn the puck over in the slot, 4 Texas Stars are headed towards the opposite zone. In a matter of 4 seconds, the puck is carried from Texas’ zone to St. John’s slot for a scoring opportunity.

The sheer speed of this play is something Canucks fans will have to get used to because Texas constantly moved through the neutral zone at a break neck pace. They turned turnovers into odd man rushes and were fast enough to capitalize on their opponent’s mistakes. The speed of Texas’ transition is an example of the “high-paced” game Desjardins wants to play.

The 10:50 minute mark of the video provides an example of the type aggressiveness Desjardins likes. 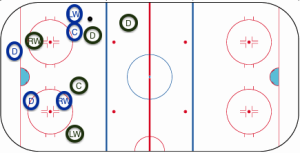 Defenseman Jamie Oleksiak is the left side blue liner that has pinched in to apply pressure on St. John’s breakout. The play oozes aggressiveness because there are two IceCaps forwards near the puck and Oleksiak has to come from the opposite side of the ice in order to make the play.

The pinch and resulting turnover shows that Willie Desjardins wants his defensemen to get involved in applying pressure. Willie Desjardins has coached his forwards to cover the pinching defenseman, which allows his blue liners to play more aggressively. 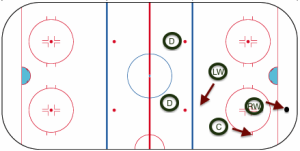 The diagram above depicts a possible forecheck the Canucks may use. The Texas Stars were very good at offering puck support when a teammate was applying pressure on the opponent. The right-winger in the diagram is deep because the puck is on his side, while the center is creeping down the half wall in order to provide support. Texas implemented a system of forcing an opposing team’s break out a certain way, while always having a teammate waiting for the play to come to him. The two man forecheck is a stark contrast from the neutral zone trap and shows Desjardins is looking to create turnovers every where on the ice. 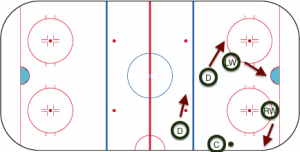 Texas also scored a lot of their goals in close to the opposing goalie. This third diagram shows that when the center, who is the supporting forechecker, gains possession, the left-winger is headed straight towards the net. The right-winger is in deep and offers support, while the defense rotates in order to get open and create mismatches.

Texas’ forecheck often led to turnovers down low and the ensuing cycle created goal-scoring opportunities in close. The diagrams offer a visual of how Desjardins will deploy a forecheck geared towards creating a cycle off of turnovers and how the offense will be aimed at getting the puck to the net.

A strong cycle system must be music to Daniel and Henrik Sedin’s ears. With a right-winger like Zach Kassian mucking it up in front or in the corners, Willie Desjardins may be the cure to what ailed the Sedins last season.

WILLIE DESJARDINS’ MODEL FOR THE FUTURE

There is an overarching theme displayed by the Texas Stars and the Vancouver Canucks’ 2014 NHL Draft: speed, speed and speed.

VAN picks RW Jake Virtanen No. 6@THNRyanKennedy says Virtanen is a shooter and an excellent skater who also brings a nasty edge

The Canucks’ first round pick Jake Virtanen is the embodiment of the style that Willie Desjardins will utilize. Virtanen is fast and can hit, both of which are skill sets that lend favourably to a heavy fore-check, transition game.

Jared McCann, the Canucks’ other first round pick, is another player that fits this fast pace ideal.

“He’s an excellent skater with exceptional lateral movement and a rocket of a wrist shot, it’s his well rounded game that sets him apart from many of his peers in the draft.” – Carl Maloney, The Hockey Writers

What has been analyzed is a small sample size of the aggressive style of hockey Willie Desjardins will use in Vancouver. The Canucks’ future is being moulded to play an up tempo transition style of hockey while the present roster is more suited to a forecheck and cycle variety. Nevertheless, Desjardins brings an aggressive approach to playing the game of hockey, which bodes well for the Vancouver Canucks.