The swimming pool is gone and the ice is back at the WFCU Centre. This can only mean one thing – Spitfires’ hockey is returning.

On Nov. 20, the Windsor Spitfires hopped a bus to London to start a 13-game road trip, one of the longest in OHL history. The FINA World Swimming Championships took over the WFCU Centre for a month. The City of Windsor installed a pool in the main bowl for the event, forcing the Spitfires out of their home.

Tonight, over one month later, they end their trip with a game against the Saginaw Spirit. On Thursday night, the Spitfires walk into the WFCU Centre to battle the Kitchener Rangers in one of the most anticipated games of the season.

When you look back on the road trip, it has been as good as you can expect. So far, Windsor has a 7-2-3 record.  For any team to do that on the road is impressive. When you factor in the circumstances the Spitfires have faced, though, one has to applaud.

Before the trip started, they lost forward Logan Brown to a wrist injury.  That was followed by forwards Gabe Vilardi, Jeremiah Addison and Cole Carter all going down with injuries throughout the trip. This meant head coach Rocky Thompson also had to deal with rolling three lines on many nights, with a potential spare forward or two. 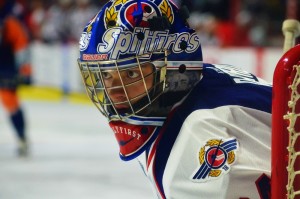 On top of that, the team relied on three defencemen – Tyler Nother, Andrew Burns and Connor Corcoran – to play up front over multiple games. It wasn’t the ideal situation by any stretch. However, Windsor has been a systematic, team-first club since Thompson took over last season.

It has allowed Windsor to play successful hockey no matter what unique situation is thrown at them. It also helped that they got timely goaltending from Michael DiPietro (pictured, above right) and Mario Culina, including three straight shutouts in December from DiPietro.

As the team gets back to the WFCU Centre, Carter and Vilardi are still on the shelf, but Brown and Addison are back. They may also have a few call-ups in their lineup, though. Junior B players can play on the roster until the World Junior Championships are finished on Jan. 5. Forwards Tyler Angle and Chris Playfair, both chosen in the 2016 OHL Priority Selection, saw time on the roster during their Erie-Niagara trip before the break.

The OHL Trade Deadline is on Jan. 10 so any roster changes to get the club battle-ready for the post-season will be made swiftly. After this 13-game road trip, the Spitfires will have played 19 games on the road to just 13 at home. This means Windsor has 21 games to play at home. With the team hosting the 2017 Memorial Cup, it’s a great chance for any new players to get used to the home ice. It’s also an opportunity for players and management to get back into a routine; something that’s important for success.

Windsor fans have waited over a month for their team to arrive back in town. It’s a thirst that’s about to be quenched. With nearly two dozen home games left in the regular season, plus post-season and the Memorial Cup, Spits’ fans are about to get a huge hockey fix. A battle for the conference title doesn’t hurt anyone for excitement, either!

Here’s a video of coach Rocky Thompson and a couple of the Spitfires’ players talking about returning to home ice:

The last time Windsor had a team that could battle for the OHL title was in 2011 when the team lost in the Western Conference Finals against the Owen Sound Attack. Since then, Windsor has had minimal playoff success. This year, a little home cooking could go a long way towards building the foundation needed to hoist the Memorial Cup come the last weekend in May.