So far this season, Winnipeg Jets forward Jack Roslovic has been biding his time, waiting for his shot to show what he can do in an expanded role. His wait is over; his shot has arrived.

This season, Roslovic has been toiling away among the Jets’ bottom-six, doing what he can with limited minutes and opportunity to fire his offensive weapons. As it goes in pro sports, one player’s injury often provides another’s opportunity. With Nikolaj Ehlers out until at least February with an upper-body injury suffered after a collision with Pittsburgh Penguins star Sidney Crosby, Roslovic’s shot to log more meaningful minutes is now.

Roslovic’s skill set is solid. He possesses explosive speed, above-average vision, adept playmaking ability, and a hard, deceptive shot. He showed off his assets in parts of two seasons with the Manitoba Moose, tallying 83 points in 97 games and was one of the team’s primary offensive weapons.

The Jets called up Roslovic last season in late December and in February, increased his role. He was given intermittent top-six playing time with Blake Wheeler, Patrik Laine, and Bryan Little. He earned the faith head coach Paul Maurice showed in him, tallying two goals and six assists that month, his best as a professional. However, his playing time lessened down the stretch.

This season, Roslovic has shown flashes of greatness but in general, the Jets — who have a loaded lineup — have struggled to find minutes for him. He’s played right wing on the fourth line and centre on the third line, but his ice time has rarely eclipsed the 10-minute mark. 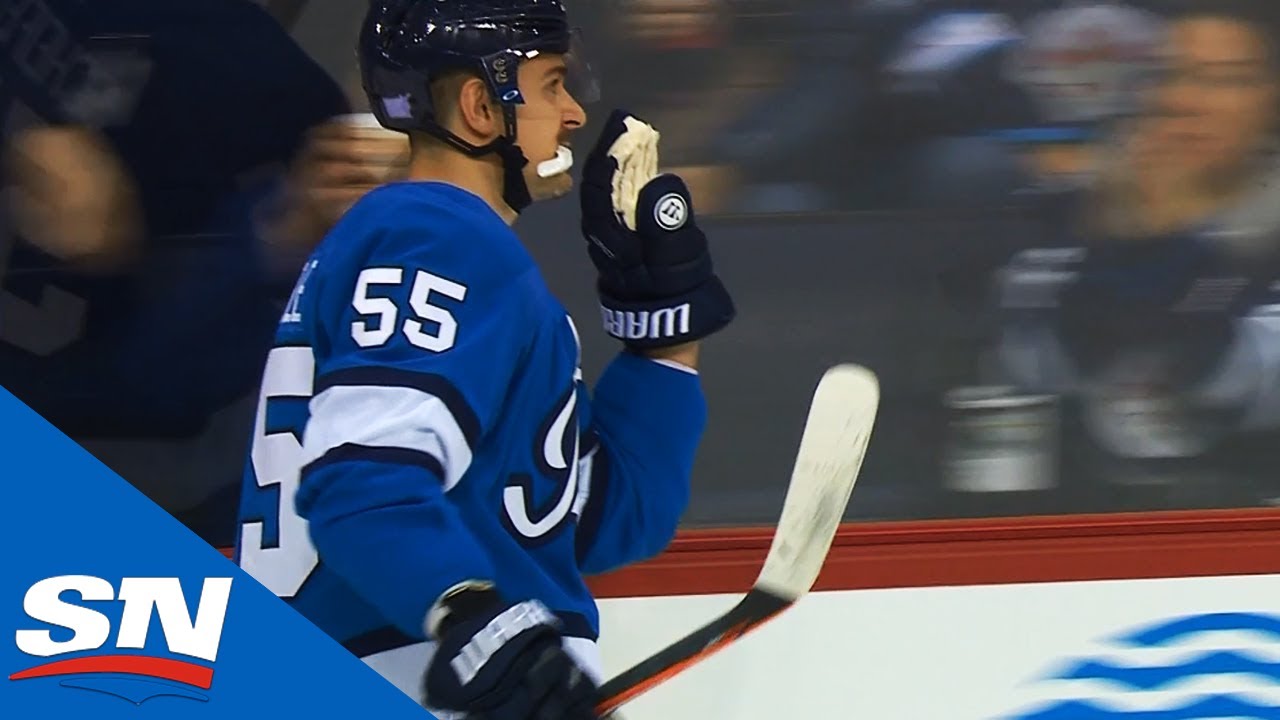 “For the Jets, having Roslovic on the fourth line and playing just a few minutes a night increasingly looks like a waste,” THW’s Rob Mahon noted in November.

Ehlers’ injury has created a big top-six hole to fill and Roslovic’s been chosen as the man to fill it. Maurice could have slotted veteran Mathieu Perreault — a versatile player who can be plugged in virtually anywhere and not miss a beat — onto the second line. Instead, he gave Roslovic his vote of confidence, promoting him to the line with Little and Laine.

“He’s a fast player. He can wheel out there. He’s got some hands and some skill. It should be a good transition for me and Patty,” Little said after Saturday’s practice. “Roslovic has that kind of speed and skill in his game. I’m excited.”

Perreault remained on the third line with Brandon Tanev and Adam Lowry. The line was terrific in Sunday’s 5-1 win against the Dallas Stars and did a good job keeping the Stars’ top line of Jamie Benn, Tyler Seguin, and Alexander Radulov in check.

In their first game together on Sunday against the surging Stars, the Laine-Little-Roslovic line looked strong and in-sync, producing four points. Laine and Little each tallied helpers on Tyler Myers’ wraparound go-ahead goal late in the second.

In the win that represented a return to form for a squad that has struggled to score recently, Roslovic looked comfortable, logged a season-high 14:50, saw time on the second power-play unit, drew a penalty, and found the scoresheet. He tallied a late-third period assist, sliding a picture-perfect pass that completely fooled Ben Bishop over to Little for an easy goal.

First, Jack Roslovic kept the puck in on a Stars clearing attempt by throwing his body at the left wing boards. Then he gathered the puck up and set up Bryan Little for the 5-1 clincher to cap off this game.

The point was only Roslovic’s ninth point of the season and just his second in his last 11 games.

Although Roslovic should be able to succeed in the top-six, expect some growing pains going forward. Realistically, he will not be able to match Ehlers’ output (15 goals and 12 assists for 27 points and an average of .675 points per game). He’s only 21, and he hasn’t played consistently a lot of minutes since his time with the Moose. He might wear down, as the Jets have seven more games before their league-mandated bye-week beginning Jan. 20.

The fact that Laine is playing on his off-wing, a position he’s not accustomed to, could also hamper the line. However, it’s up to Roslovic, Little and Laine to ensure the Connor-Scheifele-Wheeler line doesn’t have to produce all the offense. If Roslovic plays the type of motivated, impactful game he did against the Stars, expect his point total to grow quickly.

One thing’s certain: Roslovic knows his big chance has arrived and that he has to make good on it.

“In terms of taking on a bigger role for myself, you just got to be ready and prepared,” he said prior to the game against the Stars. “I’m going to try and stay here as long as I can and try and make the most of it. Try to help the line out and bring my speed to the game and try to make something happen.”

“I’m sure when (Ehlers) comes back it’s going to be his spot to take,” Roslovic added. “But I’m going to make it a hard decision. Or at least try to.”