If at first you don’t succeed, try, try again. Then quit. No use being a damn fool about it— W.C. Fields

There’s no way to know whether or not Seattle native Chris Hansen has an affinity for the alcohol-besotted former movie star, but the grinding, pound-of-flesh approach exacted by Seattle politicians likely drove him to consume a few olives himself over the past eight months.

Regardless, as reported here, an agreement in principal was obtained earlier this month between Hansen and the Seattle City Council to allow the city’s bonding authority to be tapped for up to $145 million of a proposed $490 million state-of-the-art arena to be constructed in Seattle’s “SoDo” district. With another $80 million of bonding authority to come from King County, the arena will nevertheless be one of the most equity-rich of its kind in the United States, as Hansen’s investment group is slated to contribute at least $290 million toward the project. Two sticking points in the negotiations — $40 million of freight mobility and other road improvements deemed necessary to assuage the Port of Seattle and others concerned with the traffic impacts of the new facility, and $7 million to be earmarked toward the antiquated Key Arena — were resolved and included in the Major Negotiated Changes to the Arena Memorandum of Understanding, as seen here.

With the amendment having now passed the City’s Government Performance and Finance Committee, the full vote of the Council is expected on Monday, September 24th, and is considered highly likely to be approved. Although the amended MOU will need to be ratified by King County, that action is a mere formality, as the original version was already passed on July 30th by a 6-3 margin. The amended MOU does nothing but strengthen already-tight taxpayer protections.

The project has received tremendous traction from leveraging the potential return of the Seattle Sonics, an NBA franchise that spent 42 seasons in Seattle before being ripped asunder and moved to Oklahoma City by current owner Clayton Bennett. With the scars still raw, a tremendous upswell of community support after Hansen’s proposal made the headlines helped convince skeptical politicians that the project had both economic and cultural merit. Timing is key: several NBA franchises are considered in flux and could be candidates for relocation. With an arena deal agreed upon, Seattle will now have the clear upper hand as compared to other rival cities also looking for an NBA or NHL franchise.

Although the formal availability of NBA teams is about as super-secret as the Colonel’s eleven herbs and spices, franchises potentially on the list include the Sacramento Kings, New Orleans Hornets, Memphis Grizzlies, Charlotte Bobcats and Milwaukee Bucks.

A strong co-anchor tenant: the NHL

It’s no secret that the NHL would love to have a franchise in Seattle. For one, it has the historical significance of being the first American city to hoist Lord Stanley’s Cup: The Seattle Metropolitans in 1917. Secondly, Seattle is the 12th largest media market in the United States. Lastly, there are a host of natural rivals within a three hour flight, including the Vancouver Canucks, San Jose Sharks, Los Angeles Kings, Anaheim Ducks, Phoenix Coyotes and Colorado Avalanche.

As with the NBA, however, an expansion team is not considered an option. Thus, for Seattle to secure an NHL team, it will likely have to come from relocation. Eleven herbs and spices later, with no assurances that any of the oft-mentioned teams are in play, here are five teams that have been whispered or rumored as possibilities:

Phoenix Coyotes — The mere fact that the NHL owns the franchise puts the Coyotes in the conversation. Although former San Jose Sharks CEO Greg Jamison has committed to purchasing the team, a sales tax measure will be on the November ballot. If the measure is overturned, the purchase will be thrown into serious doubt.

New York Islanders — The Islanders are a proud franchise with multiple Stanley Cups in the mantel. However, the team is involved in a nasty dispute with Nassau County over a potential new NHL arena. Despite the requisite protestations to the contrary, it is within the realm of possibility that if their situation cannot be satisfactorily resolved, the Islanders could be available. 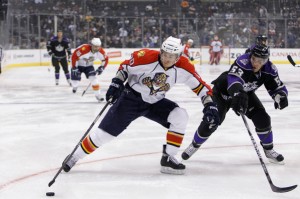 Florida Panthers — Situated in the bottom-10 in terms of attendance and with just one playoff team since 2000-01, it would seem that the Sunshine State may just not be big enough for two NHL franchises. With new ownership in Tampa, the Panthers appear to be the one more likely to take a cross-country trek into the perpetual rains of Seattle.

Nashville Predators — A well-run franchise with plenty of on-ice success since 2003-04, the Preds are nevertheless similarly bottom-10 in attendance and not generating an operating profit.

New Jersey Devils — Say what? An even more well-run franchise with even more on-ice success, last year’s Stanley Cup runner-up has had serious cash flow problems, owing $80 million in short-term bank notes and $250 million on the team and arena. Reports from several months ago indicate an investment group has been obtained to solve the club’s financial woes. Although highly unlikely, stranger things have happened than a move out of the Garden State and potentially to the Evergreen State.

With Seattle’s new facility all but a certainty at this point, Hansen’s group will be pressing for an NHL franchise as co-anchor tenant for the new arena. Which NHL franchises do you believe are most likely to be available over the next 2-3 years?

1 thought on “With Formal Approval at Hand, Seattle to Shop for NHL, NBA Teams”