Recently, the hottest topic in hockey has been the subject of tanking among the bottom feeders of the league. Buffalo, Edmonton, Arizona – and even Toronto – would all love the idea of projected first-overall pick Connor McDavid pulling on their colours. And while the fans are in the same boat, the teams constantly reassure the media and the league that tanking is out of the question.

Yet, the NHL is worried. Worried that games including these four franchises just aren’t as interesting as one would hope. In fact, it was only this past week that Sabres fans cheered on the Coyotes as they delivered another loss to the hometown team in Buffalo. The interest level simply isn’t there.

But thinking back, how often has tanking been talked about. Sure, you’ll see one or two teams every year who find themselves at the bottom and look forward to that first overall pick, but it’s never become this big of an issue with the league and its fans.

Connor McDavid is the inevitable pick at number one, but are teams tanking for him? (Photo: OHL Images)

So why is it now? What has driven this story to the top of the hockey world?

The answer is easy – Connor McDavid and Jack Eichel. It’s not often that arguably two franchise players are available at one and two in the NHL draft. On top of that, McDavid is commonly referred to as a generational player – a young man that can turn around a entire franchise.

The Disappointment in Buffalo

The McDavid jerseys, the signs begging the team to tank – that could be the most concerning thing to the league. A fan base that simply isn’t interested in winning and hasn’t been for some time is a fan base that causes concern to the business that is the NHL.

What happens if the Buffalo Sabres manage to get the coveted first overall pick? Then what? What if McDavid still needs a year before that team finds success? Will the fans stand behind the club at that point, now that they have their guy?

Now let’s be honest, Buffalo wasn’t going to be a playoff team in 2014-15. That was expected from the beginning. But as an NHL franchise, they are expected to compete. And they have. There’s been a compete level among the veteran players. But why?

Because losing isn’t fun. Having the young players on that team getting used to a losing atmosphere – a losing mentality – is actually more harmful than most fans understand. So the problem isn’t the team exactly. Sure, they are a tough franchise to watch at this point and time, but the disappointment comes from the fans. The fans that are constantly encouraging their team to lose. 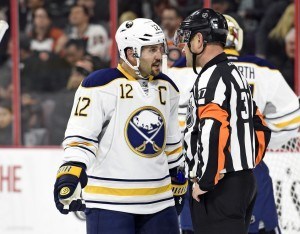 It’s been a frustrating season for Brian Gionta and his Sabres. (Eric Hartline-USA TODAY Sports)

For the past month, there’ve been numerous versions of the McDavid sweepstakes. Anytime the Sabres, Coyotes, Oilers and Leafs met one another, it was as if people only tuned in to see who would lose. Would anyone leap frog one another?

While the teams assured media and fans that they wanted to win, fans would argue against it – reeling off as many reasons as they could as to why their team should lose.

But when was the last time you heard the league worry about this kind of tanking? When was the last time that four teams were – from a fan standpoint – battling for last place in the NHL? It’s hard to remember it being this important with the Stanley Cup playoffs just around the corner.

[ALSO SEE: Is Tanking Dead? The Story of the NHL Draft Lottery]

So the question remains, would it be this big of an issue if the upcoming draft class didn’t have as many expectations riding on them? Is the McDavid-Eichel race just the beginning of an era of tanking, or is it just because of who these two players are that tanking has become the issue?

My guess is that tanking won’t always be an issue. My guess is that McDavid has been so highly covered, that fans expect him to come in and change the face and direction of their franchise.

Connor McDavid will be a star – there’s not really any question about that. But tanking, there’s no proof to back up the fact that any team is taking that route or even wants to. There’s no evidence supporting that this will become some kind of trend. So help your team out folks – cheer them on rather than cheering agains them. Relax. Take a breath. It’s simply McDavid fever getting to you.