The 2017 World Junior Championship kicked off with four games in Montreal and Toronto on Boxing Day. It was highlighted by two close contests, including the Czech Republic downing Finland with less than a minute and a half remaining in the game.

Sweden took a 6-1 victory over Denmark and the United States beat Latvia by the same score, even though Latvia kept upset on everyone’s mind for the first 26 minutes.

Here are nine standout individual performances from the opening day of the World Junior Championship.

The Isles prospect led the way for Canada, logging the most ice time among team forwards and tying for the team lead with five shots. He logged a goal and two assists, pacing the team with three points.

He was dominant, creating offense on almost every shift. Along with Erie’s Dylan Strome, Barzal was the most dangerous player in red and white. He helped thwart the Russian attack and made victory look more effortless than it truly was.

The Canadian alternate captain was a pillar for Canada, logging over 24 minutes. Only the Czech Republic’s Filip Hronek played more minutes on opening day. In his second World Juniors appearance, Chabot is expected to be Canada’s number one defender and he played that way to start the tournament.

The 16-year-old defenseman is the youngest player in the tournament. Yet, you wouldn’t have guessed it by the way he’s willing to skate into traffic and beat opponents with skill and speed. The 2018 draft eligible required little adjustment, having spent the season so far playing against men in Sweden’s SHL.

Dahlin showcased his skill, posting a goal and an assist in the tournament opener. Even two points at age 16 is a feat. Dahlin is already tied for 20th among U17 players all-time with two points and ranks fourth among U17 defenders. He’s off the charts and as he gets more comfortable, his impact could grow. 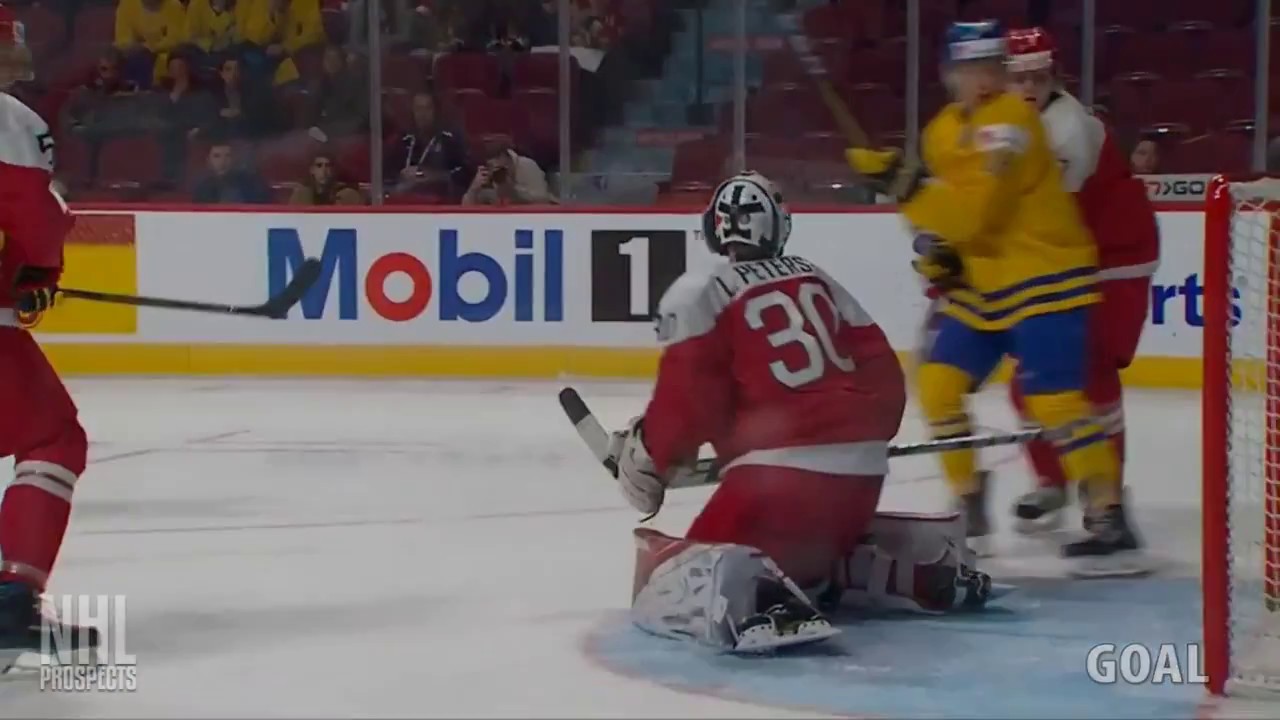 The Swedish captain emerged from a blowout of Denmark with a goal and an assist. He is also tied for the tournament lead with a plus-2 rating. He skated on a high-impact line with Alex Nylander, was a part of the top power play unit and factored into the team’s penalty kill.

It wasn’t all offense that revealed his impact. He even put together defensive highlights, like a backcheck on Denmark’s Alexander True that may have saved a goal. Eriksson Ek offers so much defensive zone support to his defensemen that counting stats can’t measure the impact he is having for the Swedes already.

The 6-foot-5 winger leads the tournament with seven shots, which no doubt played a role in him being named Player of the Game on Monday. It wasn’t a perfect game, but it’s clear he has coach Bob Motzko’s trust. He earned lots of ice and though he finished with just one goal, it could have easily been more. He pushed one shot past Mareks Mitens but was called for a crease violation, his second of the game.

Greenway is going to cause headaches for opposing defensemen. He uses his size in the corners and in front of the net to cause chaos and create opportunities. Even though the U.S. looked uninspired at times, he was one of a handful who played quite well, including Caleb Jones, Tage Thompson and Luke Kunin, who was on the ice in every situation and played a key penalty killing role.

Expected to be the top offensive threat in a deep forward group, Keller was able to get results Monday. He scored a pair of goals in the U.S. win. Though, it was tough for anyone on the U.S. to get a real rhythm going with the number of penalties the team took in the first two periods.

Keller was strong on the puck, played with confidence and carried the puck until plays presented themselves.

Russia struggled with the Canadian attack, but Rykov was a standout for the Russians. He logged a lot of minutes, leading the team in time on ice and all defensemen in shots.

It was Rykov’s third-period goal and a third-period assist on a Kirill Kaprizov goal that gave Russia hope late in the game.

Though Sweden took a 6-1 victory over Denmark, the game was much closer than it seemed. The Danes played tight and were able to establish a forecheck on multiple occasions. They even outshot the Swedes in the first period, despite exiting the period with a 2-0 deficit.

Sandstrom kept Sweden in it. He finished the game with 21 saves on 22 shots. Though he wasn’t given many tough tests, he did make one outstanding save in the second period that could have given Denmark a bit of momentum against the Swedish onslaught.

#Flyers goaltending prospect Felix Sandstrom with a strong push across to seal off the post, and denies Denmark a goal. #SWEvsDEN #WJC2017 pic.twitter.com/e9NcHBKSR7

The Finnish netminder was the reason the Finns were able to hang around until Michael Spacek broke the 1-1 stalemate with 1:18 left in the game. Vehvilainen stopped 28 of 30 shots as the defending gold medalists started their bid to repeat.

The Finns were outplayed, but Vehvilainen made it a game that could be decided by a bounce. The chips didn’t fall in their favor, but it could have easily gone that way. The Finnish roster is young and a strong early performance from Vehvilainen could keep them afloat long enough to find a rhythm.