Canada and Sweden clashed in the first game of Friday’s World Junior Evaluation Camp. It was a game where the results didn’t match what was actually taking place on the ice. Sweden won the game 5-1 with four of those goals coming in the first period, but Canada controlled play for long stretches, outshooting Sweden 38-22.

Here are a few notes on the game as the national teams continue working toward putting together their 2017 World Junior Championship rosters.

1. Not a Bad Showing By Canada

It was an ugly result on the scoreboard, but the game wasn’t nearly as lopsided as it appeared. Canada hit the locker room after the first period with a 4-1 deficit, but shots were even at 14 a side. Canada’s best players came out hard in the second, with players like Mitch Marner, Dylan Strome and Tyson Jost leading the charge. They won the possession battle in the second, outshooting the Swedes to the tune of 13-3, and then absolutely controlled play in the third with an 11-5 shot advantage that doesn’t even come close to portraying how well they played.

Though it wasn’t enough, it wasn’t a bad thing for Canada. The game result is basically meaningless and Canada was able to get a good look at some of their players in a tough situation. Some kind of disappeared, but others rose to the occasion. That’s a good sign as long as all those big names are loaned to Team Canada for the World Junior Championship. To have a better result in this year’s tournament they’ll need their best players to be their best players.

2. Mitch Marner Is A Cut Above

There was no better player on Canada than Toronto Maple Leafs draft pick Mitch Marner. Anyone who has watched him play for any extended period of time won’t be surprised by that, but it was very apparent Friday. He’s craftier, smarter and faster than most players his age.

Despite the knocks on his size and strength, there’s a serious chance he’s not available for Team Canada because he becomes a regular for the Leafs. There are, of course, no guarantees, but his intelligence is so high that he could carve out a space in the NHL this season.

What is going on with Canada’s power play? Friday’s roster was significantly different than Wednesday’s, yet both lineups couldn’t get anything done on the power play at all. Between those two games, they went 0-for-9 and didn’t even really get that many good opportunities.

It doesn’t have huge repercussions long-term since this is just a summer scrimmage, but after the team’s offensively lackluster showing last year, where offense was tough to come by, it’s a little worrying, even if logic says that what we’re seeing in Michigan doesn’t necessarily correlate to success in December.

Gabriel Carlsson, D, Sweden — Carlsson had a very good game. Though he finished without a shot and just a single assist, his presence was felt throughout the game, even when Canada was rallying. The 6-foot-3 defender held his own against a very good forward group fielded by Canada on Friday.

Canada is a mess in their own end, and Sweden is taking advantage of it. 4-1 Sweden. pic.twitter.com/xtz4fWHOu9

Joel Eriksson Ek, C, Sweden — Once again, Sweden’s captain made his presence felt everywhere. He may have been the most physical player in the game and his vision stood out for the full 60 minutes. Walking out of the corner on the power play he positioned himself to make his teammates a threat and backed the defense off, giving him the space to take the puck to the net for an early goal. He finished with a goal and an assist.

Felix Sandstrom, G, Sweden — The Flyers prospect stopped 37 of 38 shots and made life very hard on Canada’s top players. He was outstanding. He may be the best goaltender on any team at camp, though Veini Vehvilainen is providing some stiff competition.

Dylan Strome, C/LW, Canada — Strome, along with Marner, led the charge for Canada. His strength is a huge asset. He does an above average job of protecting the puck and giving himself the time to make a play.

Lias Andersson, C/LW, Sweden — The 2017 draft eligible forward has been showing why he’s a top prospect for next summer’s draft. His defensive game is strong, and his ability to make plays with speed is impressive. He could be an impact player for Sweden in December.

Watch the full-game highlights below. 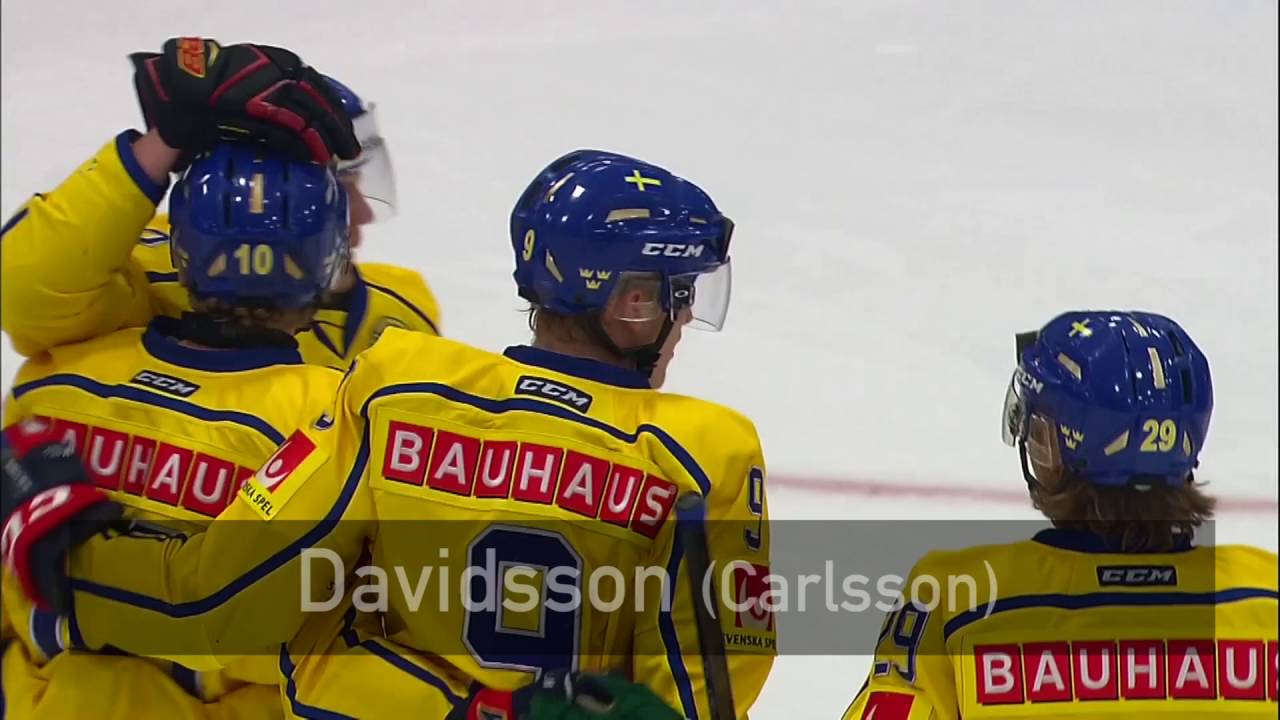