Wednesday’s scrimmages at the USA Hockey World Junior Evaluation Camp ended with Team USA taking on Team Sweden. Scoring on two of their first three shots, Sweden put the U.S. in a hole early, ending the first period up 3-0 despite the U.S. outshooting them 9-7 (though scoring chances were certainly skewed toward the Swedish side).

For national team brass, it wasn’t a terrible way to start the game. It put both sides in a position to show how players handle difficult game situations. For Sweden, they needed to push down on the gas and not give the U.S. an inch to start their comeback. Unfortunately for them, the U.S. was able to do just that, with three second-period goals and a game-winner from Logan Browne in the third.

Here are the standouts from the exhibition game.

The 6-foot-6 winger has a rare skill set. He’s not only a big, strong forward, he has a load of offensive skill and is capable of using his size to his advantage. That was on display in Wednesday’s game, where he was able to hold off players with ease and won the majority of 50/50 battles he entered.

That was nowhere better exemplified than when he scored the game-tying goal late in the second period. Greenway battled Jacob Larsson in the corner, after Larsson knocked the puck off Greenway’s stick. The corner battle resulted in the U.S. regaining possession, and Greenway beat Larsson from the corner to the net. There, he grabbed a rebound, took a shot, then quickly moved around Larsson again, grabbed his own rebound and put it home. Greenway put his agility, hands and strength on display to keep the U.S. rally going. He also backchecked hard and was quick getting to the point to block shots.

The team captain, Eriksson Ek was Sweden’s heartbeat Wednesday, even if there was naught to show for it on the scoresheet but three shots. He was consistently in the play and working the boards. He was able to possess the puck and give the team time to set up by winning corner battles and finding open space.

Coming into last season, the knock on him was his strength and size. This year, at Minnesota Wild Development Camp the roster sheet had him 15 pounds heavier than last season and it looks like it’s all muscle. He’s been playing that way too. His physicality set the tone very early in the game. It was a chippy affair, and Eriksson Ek was more than capable of playing into a gritty game and making it work, which wasn’t something you’d say about him entering last season.

The best defenseman for Team USA was clearly the 18-year-old from Boston University. He made an impact in the offensive zone, but his biggest contributions were in the neutral zone and his own zone. With the U.S. going down 3-0 early in the game, McAvoy played with vigor, pushing to shift the momentum.

Of particular note was a great play where he hustled back into the defensive zone, pushing a 3-on-1 into the boards. Afterward, he recovered the puck and made a great breakout pass. That play turned an opportunity for Sweden into a goal for the U.S. He didn’t wind up with an assist on the play, but that Troy Terry goal was the first of four straight for the Americans. His hustle shifted the momentum in the game.

Thompson was playing out of his mind during the early scrimmages, scoring five goals and six points in two contests. In the first single roster game, he did more of the same. People are sometimes not sure what to make of the University of Connecticut forward. He’s 6-foot-5, but weighs under 200 pounds and though he uses his body and his reach well, doesn’t have the same kind of physicality that Greenway has.

What he does have is a lot of skill and serious desire to score. He’s shown that all camp and his game-leading 11 shots showed that he’s not scared to take the puck himself and try to make something happen. He didn’t find the back of the net Wednesday, but after scoring five in the first two scrimmages, then taking 11 shots Wednesday, there’s no doubt that the points will come. The process is certainly there.

Roslovic’s offensive skill shone in a way that might have been more expected from players like Clayton Keller, who had a rough start to the game. Roslovic is positioning himself well to be a part of the Team USA roster in December through a combination solid vision, confidence, good positional play and an ability to carry the puck.

That was particularly apparent on Team USA’s second goal when Roslovic circled the zone protecting the puck until he saw a clearing to put it on net. Erik Foley’s tip on that shot pulled the U.S. within a goal.

The Arizona prospect wasn’t Sweden’s best forward, but he was consistently in a good position, particularly early in the game. He scored twice, though the first one was a goal that U.S. goaltender Joseph Woll definitely wants back.

His second goal was more indicative of how he was finding success by reading the play. He applied pressure, but was able to step back and find open space to work in as well. He finished with four shots on goal, and receded a bit as the game wore on, but he made a mark early and showed some intelligence while doing so.

Watch full highlights from the game below. 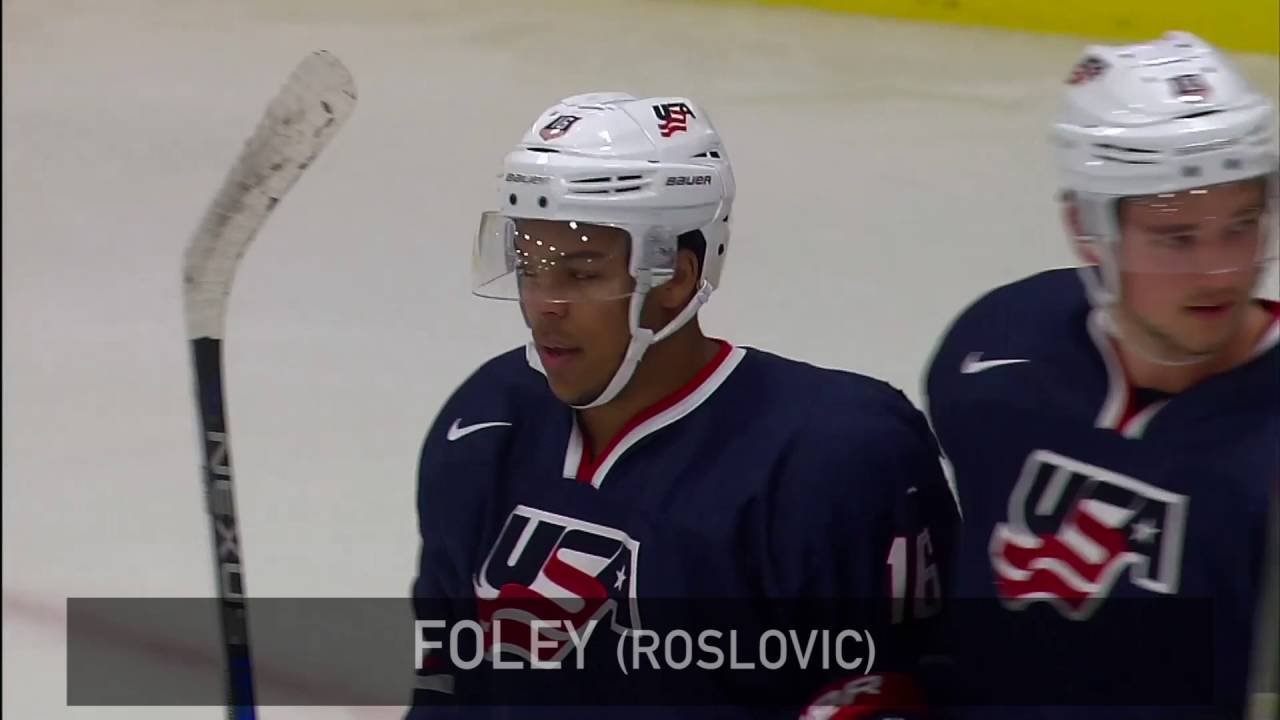