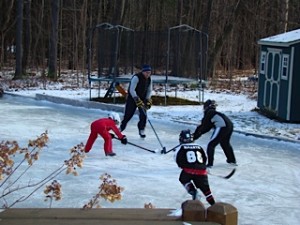 Simply put, I am sick of it all.

I know that there are legitimate reasons for both sides of the NHL labour talks to take the approaches they have taken…but the truth is, I just can’t seem to muster up any more give-a-damn when it comes to the National Hockey League. Whenever I try to stir up a fiery opinion for an article or a podcast discussion, I come up empty. For the first time in my life, discussing the highest level of professional hockey simply holds no appeal.

At first, I was diligent; dutifully paying attention to every tidbit of information coming out. Then I realized that, although there were many statements being made, there was very little actual information being released. Bill Daly and Donald Fehr would stand in front of a podium and move their lips, but for the life of me, all I could hear was the voice of a grown-up Peanuts character:

“In regards to the ongoing talks, we feel that the players union has failed to recognize…womp-womp womp, womp-womp-womp womp…”

I have done my best to pay closer attention to minor leagues, major junior leagues, and university hockey – which has been great, I’ve actually learned a lot about the game – but it simply doesn’t inspire the same kind of emotional response I’ve come to expect from watching hockey. Don’t get me wrong, the game is being played at a very high level, and is quite entertaining to watch, but I’m just not a die-hard fan of the Chicoutimi Sagueneens or the University of Alberta Golden Bears.

With my first son due in March, I was honestly beginning to worry that he might be forced to grow up in a world without the NHL as we know it. Each negotiation seems to grow more and more volatile, and the stakes are larger than they have ever been. The work stoppage of 1992 turned to a half-season missed in ’94-95, which then turned to a full year without hockey in ’04-05. Now, we’re staring down the barrel of another year lost, with no real end in sight.

As a fan, as a writer, and as a player of the game, ‘frustrated’ doesn’t even begin to describe the feeling.

But it has been the playing of that third role which has been my salvation in past few months; as a player, hockey takes no breaks. My men’s league team, The Men With No Name, has had a…well, let’s just say ‘below average’…start to the season this year. We drew a tough division and started on a bit of a losing streak, accumulating one humiliating loss after another. But as the season began to close in on the halfway mark, a shifting of the divisions along with a shift in team mentality has given us new life.

We’ve won three of our last four games, and all those little things that were going against us in the beginning are now starting to level out. Pucks are lying flat in the slot instead of bouncing around awkwardly. Shots are going off the post and in instead of off the post and over the glass. The natural ebb and flow of the game has brought us back to par, and significantly lightened the atmosphere in the locker room. Guys seem to be having fun again.

The game of hockey, in and of itself, is a simple equation. The rules, the field of play, and every factor outside of ability are completely equal, and whoever scores the most goals wins. There is beauty in that simplicity, and in experiencing the touch of the hockey gods as their invisible hands continually shape and reshape the concepts of luck and fairness. All bad bounces eventually receive a good one, and every phantom call resulting in a critical short-handed situation eventually receives an unearned power play down the road.

The stakes of these NHL labour negotiations may be higher than ever before, and there may be a good chance that the league will never be quite the same again, but all we can do as fans is trust in the fact that the game we love will be just fine in the end. Hockey has survived periods of contraction triggered by World Wars, it has survived dueling powerhouses competing for national attention in the form of the NHL vs. WHA conflicts of the late seventies, and it will survive the overwhelming influences of greed and frustration which dominate its current landscape.

In the meantime, we are presented with a perfect opportunity to embrace hockey in its simplest form. If you grew up playing the game, why not dust off the old skates and go play some shinny at your local rink? If you’ve got kids, go out in the street and shoot a tennis ball around. Even if you’ve got no experience whatsoever, there are plenty of local ball hockey leagues that play in high-school gymnasiums and require nothing more than a stick, a pair of gloves, and sneakers. Even my ice league has two divisions specifically for those who have never laced up a pair of skates. Everyone has been looking for a way to fill the void left in our lives by hockey’s absence, but I believe the solution has been in front of us all along;

We should probably just fill it with more hockey.