Stanley Cup predictions are aplenty. Here at the start of December, it may be too early to confidently make predictions. At the same time, there has been a winnowing away of the weak and the strong have separated themselves convincingly. With that in mind, here is my prediction of which team will be hoisting the Stanley Cup come this June. 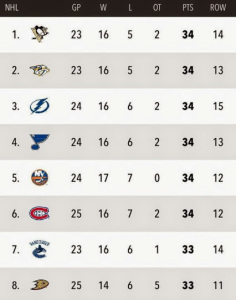 Before I get to the actual prediction of the team it will be, let’s look at who has separated themselves at the quarter-pole. At the top of the heap are the Pittsburgh Penguins. A look at the graphic shows that there is not a great deal of separation between the eight teams listed. The Pens perch is really only a snapshot in time as each of the teams have accumulated similar win/loss totals and points. Will the Penguins march into June at the top of the heap, or will one of the others make a grab for Lord Stanley’s glory?

That may come off as a sort of stupid thing to say, given their current run and Sidney Crosby’s dominance thus far. My colleague Tannor Torrao with The Hockey Writers

gives a great look at where the Penguins are currently, and outlines a few of their weaknesses here. I would have to agree with his analysis from the standpoint of their need for another physical defenseman and a couple of top-six wingers. And frankly, I just don’t trust Marc-André Fleury when it is crunch time.

I just watched the Penguins take on the Carolina Hurricanes – the team I regularly cover – and I was not overly impressed. Yes they are a great team. But the Hurricanes went into the CONSOL Energy Center and took the first game of a home and home series. Not to dismiss my beloved ‘Canes, but I did not see Stanley Cup type dominance from Pittsburgh during either game. Crosby was silent with the exception of taking penalties, and nothing about this team screamed at me as being overtly special. The blood clot to Pascal Dupuis gives us all pause to remember what is important in life, but for purposes of this article, is another entry on the challenge side of the long-term Penguins ledger. Our prayers are for a complete recovery for Dupuis.

A Stanley Cup for the Lightning?

There is a lot to like about the Tampa Bay Lightning at this point of the season. What’s not to like about this current Atlantic Division leader. Tied with the Habs with 34 points, they are hitting a very nice stride on all fronts. Another colleague with The

Hockey Writers, Jarrod Heil, breaks down the team nicely here. His first star goes not to fan favorite, Steven Stamkos, but to goalie Ben Bishop. A stout 8-2-1 in November, with a save percentage of .922, yet Bishop is still not your typical NHL household name. Certainly not the first to come to mind as would Martin Brodeur or Tuukka Rask or Jonathan Quick. Yet Bishop is getting it done in Tampa and they may very well come out of the Eastern Conference and find themselves in the Stanley Cup Finals.

You may be laughing at this point, but I personally feel that the Lightning have as good a shot as the Habs or the Islanders or the Penguins at this point in the season. They are getting contributions from several of their players, making them more than just a first line scoring threat, and their defense is solid. Tampa Bay could be your dark horse candidate when the teams come down the stretch.

Joining Pittsburgh, Tampa Bay, and the New York Islanders at 34 points are the Habs

Well here they are again. The Montreal Canadiens are back at it having another quality year. General Manager Marc Bergevin

just signed forward Brendan Gallagher to a six-year contract extension worth $22.5 million. Bergevin has been rounding up his players like an expert rancher, with 15 players under contract and only Alex Galchenyuk left to be corralled. According to Pat Hickey of the Montreal Gazzette, the Habs will still have $11.5 million in cap space as it currently stands, which should be plenty for whatever needs to be worked out with Galchenyuk.

We all remember PK Subban’s emergence into the limelight last season. He is still the center of much of the attention that surrounds the Canadiens. His “unorthodox” style of playing defense has its detractors and those who find it refreshing. His 5 goals, 9 assists for 14 points are respectable, but he leads the league in games played at 25.

Subban is still young at 25, and by all observations is improving as an NHL player. I think we are only beginning to see what kind of impact Subban will have as he grows with this team. Whether he gives in to his coaches and changes his style of play, or whether they just let him do what he does, as long as the team is winning it will  be a non-issue.

Patrick Schmidt at fansided.com makes a similar point to mine about the Penguins recent performance against the Hurricanes:

“Montreal lost two of their last three with Dustin Tokarski starting in place of Carey Price, but still you can’t lose 2-1 at Buffalo and lose in a shootout the next night and expect to be taken seriously among the other elite teams in the NHL, especially those in the Western Conference.”

The Habs will very likely be in the playoffs, but will they have enough to make it to contend for the Stanley Cup in June? Goalie Carey Price is 13-5-1 with a .922 save percentage. You can’t overlook the zeal to bring the Cup back to Canada that a team like Montreal will feed on if they begin to go deep into the playoffs again. I’d keep an eye on these Habs as possible contenders.

Another Stanley Cup on the Island?

The glory days of the New York Islanders have long since passed. But there is new life and hope on the island, and it looks to be for-real. They too have 34 points and are 17-7 at this juncture. Scott Clinco of The Hockey Writers penned on November 25th that the team is finally earning the respect of the media and other coaches. What is going on? The Islanders? Just ask Philadelphia Flyers fans who certainly did not enjoy this:

With John Tavares’ 10 goals and 13 assists, this team is doing what nobody saw coming in October: winning. For one thing, Jaroslav Halak is the real deal. At a save percentage of .923, he is the backbone of this finally resurgent team. As a Hurricanes fan, I remember asking aloud, “Why can’t we trade like that?’ when the Isles nabbed Johnny Boychuk and Nick Leddy. The team seemed instantly better.  Ryan Lambert at Yahoo Sports has a great in-depth review of the Islanders here. It is not better summarized than his observation:

“No team has transformed more in one offseason in recent memory than these Islanders, and they’re not winning through the smoke-and-mirrors nonsense advanced by the Avs and Leafs of recent years.”

Am I ready to pronounce the New York Islanders my Stanley Cup pick? Not quite. But they are fundamentally sound, and that style of hockey can go far come playoff time. The Islanders are worth watching.

And from the Western Conference

I know, I haven’t picked a finalist from the Eastern Conference yet. And I may not. The Western Conference is a fast-moving freight train right now, and I’ve got my eye on who I think will win the Stanley Cup when the smoke clears. I will put my confidence on one of two teams at this point: The Nashville Predators or the St. Louis Blues.

The Predators are hitting on all cylinders right now. they have an insane presence in the net with Pekka Rinne. 16-3-1 with a .933 save percentage is tremendous, as is his goals against average of 1.82.

Shea Weber is a fabulous defenseman, worth his spot at the top of the list of the NHL’s fattest salaries. He is +11 and has 6 goals and 9 assists thus far. Nashville made a huge commitment to shore up their back end with the big Canadian, and Weber is not disappointing.

James Neal has 9 goals thus far, but the real story is rookie Filip Forsberg. NHL.com reported Monday that Forsberg was named the NHL Rookie of the Month for November. He led all rookies with nine goals, 15 points and a +9 rating in 13 games during the month. Not too shabby for any player, much less a rookie. (Are you listening Alexander Semin?) The 20-year old Swede leads all rookies in goals. points, and a host of other stats. The NHL crew breaks it down best:

In a year behind the bench, Coach Peter Laviolette has turned this team around. Through Sunday they sported a a league-best 10-1-1 at home and allowed 1.96 goals per game, an NHL-low. The Predators are much more offensive minded and are playing well nearly every night. I’ll get to see them up close Tuesday night in Raleigh.

So I’m Dissing the Blues and Canucks?

Not at all. I would not be surprised one bit if the St. Louis Blues or the surging Vancouver Canucks won the Stanley Cup in June. The Sedins and  Radim Vrbata are legit scoring forces in the NHL, as are Nick Bonino and Chris Higgins. The team is a multi-line scoring threat and this serves them well. I don’t take them lightly.

Newly minted Head Coach Willie Desjardins has this team buying into his system of hockey. (This should give ‘Canes fans hope as their team buys into the system of their new head coach Bill Peters.) and Ryan Miller is a beast in-goal. The Canucks are capable, but I just don’t see them sustaining a run all the way into June.

The St. Louis Blues are in the 34-point club through November. They are very good. Their goalie is very good. Brian Elliott is tied for the league lead in goals against average at 1.82. And the Blues’ backup goalie Jake Allen is no slouch at 2.16. With Elliott out, the veteran has come calling. Future Hall of Famer Martin Brodeur has earned a tryout Tuesday, and could suit up for this week’s action.

Vladimir Tarasenko has been strong with 14 goals and 12 assists already this season. He is only 22-years old. This goal on November 3rd was crazy good:

Last season T.J. Oshie became a household name, particularly after his shootout performance in the Olympics. The Blues are good, but can they stay healthy enough to make it all the way through to June and emerge victorious. On paper the answer is yes. But injuries have hit this team in the past, and even now with Elliott out, have to be a consideration. Injuries can derail any team. I’m just taking a wait and see approach to this very good Blues team.

And my pick is:

Do you agree with my pick? Disagree? Think I’m completely wrong? Comment below and let me hear from you, and how you feel about my pick. This could be fun.

40 thoughts on “Your Stanley Cup Champion in June Will Be…”