The Pittsburgh Penguins eclipsed the quarter-point of their season this past week, on Thanksgiving Eve against the Toronto Maple Leafs. As they round turn one, I thought we might take a brief look at what we know, and perhaps what we’d like to see heading towards the half-way point of the 2014-15 campaign.

At what seems like an unusually high rate – perhaps because I live in Pittsburgh and have been immersed in the Penguins since I was about seven years old – sad, potentially career-ending things just seem to happen to this hockey club.

Olli Maatta has been great for the Penguins, and there is no doubt that he has excelled fairly quickly for a youngster. (Charles LeClaire-USA TODAY Sports)

Let’s start with the second-most recent development (saving the Dupuis blood clot for further down) and work our way backwards. Doctors discovered a cancerous tumor on Olli Maatta’s thyroid gland just over a month ago. This story, like most others for the Penguins under circumstances like these, has a happy ending. Maatta was originally expected to miss up to four weeks due to recovery after the surgery would remove the tumor, but man this kid is tough.

He’s only 20 years old, and he returned to the Pens’ lineup after just two weeks of down time without missing a beat.

Then there is Kris Letang’s stroke from this past spring. after missing most of the remainder of the regular season from February on, he returned triumphantly just prior to season’s end and in time for the playoffs. Remarkably, Letang has been arguably the Penguins’ best blue-liner – both last season and this one – since his insertion back into the lineup.

Then of course you have Sidney Crosby’s lingering concussion issues and Evgeni Malkin’s knee injury back in 2011 that coincided with Crosby’s concussion. To go along with the face and owner of the franchise dealing with back problems through most of his career; of course I speak of Mario Lemieux. Oh yeah, he was also diagnosed with Hodgkin’s disease in 1994.

The saddest event to ever befall this team was the death of Michel Briere in 1970 following 11 months in a coma due to a single car accident in Briere’s native Quebec. His jersey now hangs from the rafters of Consol Energy Center.

But perhaps the most recent setback to the Penguins is its second-saddest moment:

Pascal Dupuis May be the Most Beloved Current Penguin 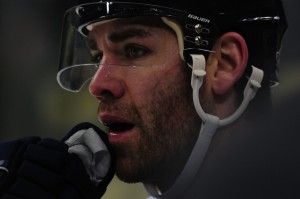 “Super Duper” had a blood clot discovered by team doctors shortly after complaining of minor chest pain. The clot was found to have traveled to Dupuis’s lung, a very severe and potentially career-ending discovery.

The outpouring of emotion towards Dupuis, especially in the immediate future after his condition was announced was overwhelming to say the least. Fans held up signs and chanted his name when he was shown on the big screen above center ice in the first game after his diagnosis.

Right away I could tell from listening to local sports-talk radio and reading the local papers that fans were crushed. Not because of what Dupuis’s on-ice loss will mean to the Pens. Sure it will be a huge loss, not only from a production standpoint, but also his leadership and calming influence. No, the fans felt something more. I feel something more. Fans are crushed because Dupuis is a genuinely nice guy who fought so hard and tirelessly to return from his knee injury suffered almost one year ago exactly.

Upon his return in the season-opener back in October, he tallied the second four-point night of his career (1G-3A).

The fans of this team feel for Dupuis not as a hockey player, but as a man. A human being. That said .

By all accounts, new head coach Mike Johnston is about as no-nonsense as they come.

Gone are the days of “mustache boy” for whoever scores last (or not at all) in a shootout during practice. Its all business with Johnston.

He hasn’t been afraid to change up his lines and try new things. The line of Chris Kunitz, Crosby and newcomer Patric Hornqvist was one of the best lines in hockey prior to some injuries in the top six group. The injuries forced Johnston’s hand a bit, but at some point I still feel like he would have tried mixing and matching anyway.

Last season, the first power-play unit would stay on the ice for about a minute and a half, giving the second unit what amounted to mop-up duty. Not so this time around. Each unit receives about the same amount of time on the ice, and depending on who draws the penalty, the second unit may actually start it off.

This is By No Means a Perfect Team 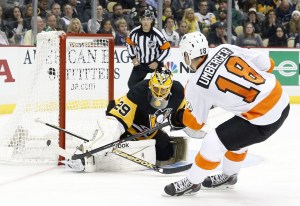 New GM Jim Rutherford has some work to do in terms of the ongoing construction of the 2014-15 Pittsburgh Penguins.

For starters, two top-six wingers are needed, and needed sorely. While Blake Comeau has been a nice surprise with his eight goals and six helpers thus far, he is not the long-term (being this season and the playoffs) solution on either Crosby’s or Malkin’s wing.

Nick Spaling, well, it’s Nick Spaling. Need I say more? He’s just not a top-six guy. That’s not his game. Bottom line is he is keeping someone (as yet unknown) else’s spot in the top six warm for them.

Perhaps the biggest need right now, and one that I’ve mentioned to just about anyone who will listen is a physical defenseman NOT named Robert Bortuzzo. I sit about 15 rows behind Marc-André Fleury in the first and third periods of Penguins’ home games and I can tell you that if Rutherford can acquire that physical presence in front of Fleury, the Flower may buy Rutherford a new car. And not a Honda. I’m talking Aston Martin, Bentley, you (well, Rutherford) name it.

I was on the Evander Kane bandwagon for about 5 months. I had a perfect trade scenario worked up in my head, if Rutherford would just have the… Intestinal fortitude to pull the trigger.

Alas, the Jets are currently in contention and most likely unwilling to part with the one player I feel would be a perfect addition to the lineup.

Which brings us to other potential names out there; and any list at this point has to start with the Edmonton Oilers.

As my colleague Adam Williams points out the Pens and Oilers are nearly perfect trade partners. Each has what the other needs. One name to keep an eye on out of Edmonton is Jordan Eberle. He is arguably the Oilers best player, thus making him their biggest trade piece. It would take a pretty healthy package from the Pens, one I’m not sure I’d be willing to give (think any two of Derrick Pouliot, Scott Harrington, Simon Despres, Brian Dumoulin).

Eberle would be a nice addition to this lineup for sure, but there would have to be one other top-six winger brought in in light of Beau Bennett’s inability to stay on the ice.

My best guess however, is that Rutherford waits for the best deal to play itself out, which most likely means something won’t happen until closer to the trade deadline. My wish would be for Rutherford to pull the trigger now, and give whomever he acquires a chance to really mesh with this team, instead of the usual month-plus leading up to the playoffs for a player to learn a new system and habits.

Hope all of my American readers had a wonderful Thanksgiving! One thing I am very thankful for is having not only this platform to voice my thoughts on the Pens, but having all of you who read it. A deep and heart-felt thank you.