If you’ve read my bio page, I am a big college hockey fan. I cut my teeth covering my alma mater Oswego St. and its NCAA Division III hockey team.

However, my first encounters with college hockey were watching ECAC Division I teams Clarkson University and St. Lawrence University, who are only separated by 11 miles on New York State Route 11.

Today I’ll preview the first round of the 2015 ECAC Men’s Hockey Playoffs. I’ll be doing previews each round until the NCAA tournament field is announced.

I’ve always been fond of the ECAC, and they’ve gotten a lot more respect in the last couple of years after Yale won the 2013 national title (over conference and in-state rival Quinnipiac) and small Union College in 2014. (The school is actually Division III, but plays up in men’s and women’s hockey.)

This week starts the best-of-three first round of the ECAC postseason that run from Friday to Sunday, and I’ll break down the matchups and a couple of players to keep an eye on.

Season series: Dartmouth 2-0 (4-2 at Princeton on Dec. 6; 3-1 at Dartmouth on Feb. 27)
Players to watch: Dartmouth, F Eric Neiley, Sr., (13 goals-16 assists; 29 points); Princeton, F Jonathan Liau, Jr., (4-10-14).
Breakdown: The Big Green just missed out on getting a bye after losing the season-series to Colgate. Both teams don’t have any current players drafted by NHL teams, but Dartmouth is talented. New coach Ron Fogarty came from Division III Adrian (Mich.), and is starting to get some late-season results.
Prediction: Dartmouth sweeps 2-0. 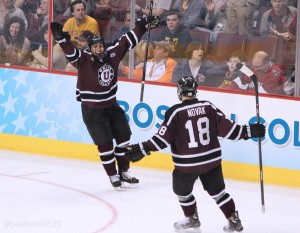 Dan Mount covers the Nashville Predators for The Hockey Writers. He can be found on Twitter @DanMountSports.