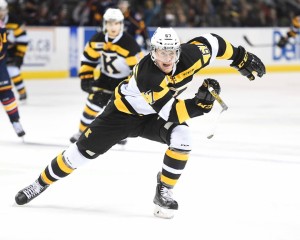 Can Lawson Crouse adapt to the NHL game? (OHL Images)

The 2015 NHL Entry Draft is loaded with high-end talent, so much so that it has become arguably one of the most highly skilled and deepest draft classes in NHL history.

For those with elite, generational talent such as Connor McDavid and Jack Eichel, a spot atop the 2015 Draft is not only ensured, but also well deserved.

However, there are a select number of eligible players in the 2015 NHL Entry Draft who appear to be highly valuable, yet could quite easily become 2015 draft day busts. Whether it be a misinterpreted skill set or overvalued competition level, the following three 2015 eligible players could soon become draft busts.

Known predominantly for his incredible size, scouts have projected Lawson Crouse to be a top-10 selection come draft day. A second year player from the Kingston Frontenacs of the Ontario Hockey League, Crouse recorded 29 goals and 51 points over 59 games in 2014-15. A highly competitive player who loves to play a physical brand of hockey, Crouse has often been compared to Zack Kassian of the Vancouver Canucks.

The major areas lacking in Crouse’s game are his offensive skills. Although he is an adequate skater, both is shot and hands with the puck are extremely average, as witnessed in his inability to produce at a point per game level in the OHL. Sure, Crouse could become a power player in the NHL, however his offensive output is not that of a top-6 NHL player. Scouts clearly see something in his game, however, Crouse may have severe difficulty adapting to an NHL game of ever increasing speed and skill.

Like Crouse, Bittner is widely regarded for his physical game and big body. At 6 foot 4, 205 pounds, Bittner recently completed his third season with the Portland Winterhawks of the Western Hockey League. In the 2014-15 season, Bittner scored 34 and added 37 assists in 66 games, as well as 4 goals and 12 points in 17 playoff games. In terms of an NHL comparison, Bittner is frequently compared to James Van Riemsdyk of the Toronto Maple Leafs.

In terms of the Bittner’s game, both his skating and on ice intelligence are very good, however his shot and hands have been regarded as average. Further, Bittner’s competition level as been called into question, not because it is inexistent, but rather because it is inconsistent. If Bittner is able to bring his best on a nightly basis, as well as improve his offensive skills, he could quite easily become a strong second line NHL winger. If not, he could become yet another NHL draft bust. 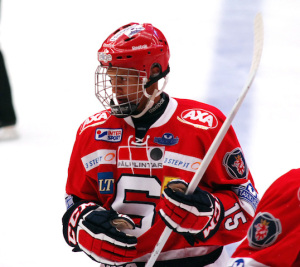 With tremendous mobility, Oliver Kylington is one of, if not the best skater available in the 2015 NHL Entry Draft. At 6 foot, 185 pounds, Kylington is known for his quickness, speed and agility rather than his physical play. In 2014-15, Kylington split his season between Farjestads BK Karlstad of the Swedish Hockey League and AIK of the Swedish 1st Division. In total, Kylington recorded six goals and 12 points over 35 total games.

Some scouts, including Bob McKenzie believe that Kylington could still be selected in the first round despite his stock slipping dramatically over the 2014-15 season. Once ranked fourth by TSN’s Craig Button and 11th by Bob McKenzie, Kylington has dropped heavily in the eyes of many, who cite his adequate yet lacklustre hands and shot, as well as competitiveness. Similar to Bittner, scouts felt Kylington’s on ice work ethic varied from game to game and required consistency. If selected following the first round, Kylington could quite easily become the steal of the draft, as he once projected to be amongst the top defenders available. He certainly could reach his potential, however it will require a new found sense of purpose and determination both on and off the ice. In terms of an NHL comparison, Kylington is often noted as similar to Keith Yandle.