It’s been awhile since the Montreal Canadiens last drank from Lord Stanley’s Cup and fans crowded St. Catherine Street with beers and banners ready to celebrate victory.  The 2012-2013 lockout shortened season and embarrassing first round meltdown at the hands of the Ottawa Senators marked the 20 year anniversary of the Habs’ legendary playoff run and the 1993 Cup victory.

In the ensuing 20 years, the Habs have had only one trip to the Conference Finals, a miracle run of its own, that resulted in a five game loss to the Philadelphia Flyers in 2010. Otherwise, they have missed the playoffs seven times and suffered a string of disappointing post-season exits; including seven quarter-final losses and three sweeps.

Stats (especially 5 on 5) and possession numbers aside, here are five signs the Montreal Canadiens are poised to make a run at the Cup this season:

Is this our year? #DriveFor25

5. The Habs determined their own Fate 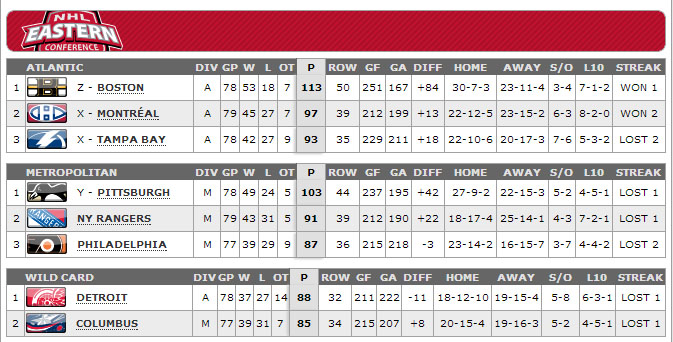 Obviously making the playoffs is a crucial first step but it’s how the Habs managed it that points to their potential for success.

There were many years when the Habs had to crawl their way in as the 7th or 8th seed.  There were the years when it took a nail-biting final game against the Toronto Maple Leafs to clinch a berth that didn’t always end in success.

Last season the Habs clinched their playoff spot with 8 games remaining in the season but then proceeded to lose 5 of 8 while being outscored 36-22.  The team still managed an impressive 2nd place finish in the Eastern Conference but crashed and burned in the first round against Ottawa.

With three games remaining, the Habs have already clinched their playoff spot and are currently in a tight battle with the Tampa Bay Lightning, their likely first round opponent, for home ice advantage.  Granted they needed help from the New Jersey Devils to get that coveted “x”, but despite some sloppy play in recent games, the team has won both since, and in spectacular fashion.

The 2013-2014 edition of the Habs seems to have learned that taking a playoff spot for granted and losing your way into the post-season will get a team kicked out in the first round.

4. Management is on Board

As late deals shuffled through the headlines, the news broke that the Habs had acquired sniper, and notorious Bruins killer, Thomas Vanek from the New York Islanders for prospect Sebastian Collberg and a 2nd round pick in the 2014 draft.

Not since Alex Kovalev has Montreal management pulled off such a coup at such little cost on Deadline Day to bolster the team’s playoff chances.    As many might remember, Kovalev’s first post-season in Montreal back in 2004 marked a first round upset of the 2nd seeded Boston Bruins by the 7th seeded Montreal Canadiens.

A regular season game against the Ottawa Senators was the turning point of the season.

After crashing out of the playoffs in 2013, the Senators had become the Habs’ Achilles heel.  In three meetings this season, the Sens had two victories and one overtime loss.   Leading up to the fourth match up, the Habs had lost three in a row and had no regulation wins after the Olympic Break.  At the five minute mark of the 3rd period the Sens had dominated the game and held a seemingly 4-1 lead with 3 minutes left on the clock.  The team seemed destined for a Leaf-like collapse.

Fans that refused to watch their team fold on yet another occasion during the most crucial time of year turned off their television sets.

Can't decide whether to watch the 3rd period or the last 2 hours of Gettysburg. Picket's Charge could end better than this, #mtlhockey

With 3:22 left in the 3rd period Lars Eller scored his first goal in 25 games.   At 17:56 captain Brian Gionta’s wrist shot brought the Habs to within one.  Then, with 0.3 seconds on the clock David Desharnais forced overtime.  Francis Bouillon scored the winner at 1:26 of ot to give the Habs the most exhilarating comeback in recent memory.

It was a record night for the Habs and, more importantly, instilled a sense of confidence and resilience that has bolstered the team’s performances of late.  Since that game, the Habs are 9-2-0 including a shootout victory against the Boston Bruins to snap the B’s 12 game winning streak; a second 3 goal comeback victory against the Senators on Friday; and a third period regroup after blowing a 3 goal lead against the desperate Detroit Red Wings on Saturday.  The Habs have become a team that knows and believes it can win, even when they’re down.

Incidentally, the last time the Habs staged an epic comeback was in 2008 against the New York Rangers.  That year, the Habs overcame a 2 game deficit to defeat the Boston Bruins in seven games in the first round of the playoffs.

2. Who Says the Olympics are bad for NHLers?

Goaltender Carey Price is one of the best positional goalies in the league.  His calm and poised demeanor is envied by many.  However, throughout his career he has carried the label of a big game letdown.

First there was the 2010 playoffs when a young Price was pinned to the bench while Jaroslav Halak back-stopped the team to the Conference Finals.  Then there was 2011, when a 6th seeded Habs team took the 3rd seed Bruins to seven games but were ousted from the post-season in an overtime loss.  And then there was last season’s meltdown where Price suffered an injury and left Peter Budaj to shoulder the remaining two losses.

Price’s performance at the Sochi Olympics in February was nothing short of wondrous.  In the biggest games of his career, Price was unshakable and unbeatable.  Team Canada became the first in the NHL-era Olympics to go undefeated  throughout the tournament.  Price (with Luongo) allowed just three goals in the process.  Regardless of the ridiculously talented team and especially defense in front of him, Price’s back-to-back shutouts to win Gold will forever be remembered by a nation.

When does reality hit for #CareyPrice when he realizes he doesn't have Weber (Shea), Keith, Piertrangelo and sees the #Habs core #Canadiens

Back in Montreal, Habs fans are still feeling the pride and confidence exuding from their star goaltender.  Since his return, the quiet man between the pipes has been candid in interviews, has developed into a leader and has brought his game to a new level.  In his first game after the Olympic break, Price faced 48 shots en route to the record comeback against the Ottawa Senators.

It took some time and convincing but not since Patrick Roy has a Canadiens goaltender instilled such confidence in a team and fan base. As Therrien said, when asked how his team managed a playoff berth: “Obviously with a goaltender like Carey Price, it’s always a big plus.”

With Price on top of his game the team could be unstoppable.

Speaking of Roy, there are those of us that believe the Habs’ 20 year Cup drought has as much to do with poor management and incapable rosters as it does with the long-standing hex hovering over the Habs in the wake of the Patrick Roy trade.

On a meaningless night in December of 1995 a rookie coach left his star goaltender in nets for 9 goals prompting jeers from the fans and Patrick Roy to openly declare he would never play another game in a Habs uniform.  He didn’t and the Hockey Gods were angry.

Fans that remember that fateful night and the trade that sent one of the greatest goaltenders ever to play the game to the Colorado Avalanche for virtually nothing have grouped every successive failed Habs season into what is known as the “dark years”.

This season fans have reason to hope.  The team is good; their goaltender outstanding.  But more than that, Patrick Roy returned to Montreal and passed the torch.  It was a small moment but an important one.

The anger may have dissipated when Roy returned for his jersey retirement ceremony.  The peace restored when he returned to the ice for the Centennial celebration.  But nothing meant more to fans than watching Patrick Roy return as head coach of the Colorado Avalanche and walking through his old players’ entrance (albeit at the Bell Centre).  As he walked out Roy came face to face with Carey Price who offered him a tap of support.  Roy smiled.

The demons have been exorcised.  What happens next is up to the players on the ice.