Since their inception in 1970, the Buffalo Sabres have made a number of what appeared to be big moves. Some signings and trades turned out great while others blew up in their faces. Today, it’s time to focus on the latter of the two sides.

From getting poor returns in deals to not even offering a deal to a top player, the Sabres have left many scratching their heads from time to time. But what moves are the absolute worst? Now, this doesn’t take any draft picks into account as that is a discussion for another time. This list focuses solely on trades and signings – or non-signings – that the organization has made.

With the Sabres in the midst of a run to a division title in 2010, then general manager Darcy Regier made a trade with the Columbus Blue Jackets to bring in Raffi Torres for the postseason run. Torres came to Buffalo with 19 goals, immediately making him the team’s leading goal scorer. Unfortunately for the team, rather than help the team win, Torres had a performance that would go on to make him the biggest trade deadline bust in Sabres history…by far.

Torres came to the team out of shape, and was moved from his spot in the top six almost immediately by coach Lindy Ruff. Not only that, Torres failed to score a goal in any of his 18 regular season appearances for Buffalo, and was even benched in the first round of the playoffs because of his play. Not really worth that second-round pick – and Nathan Paetsch – that was dealt.

In 1976, after a 56-point season, the Sabres traded forward Peter McNab to the Boston Bruins for Andre Savard.

This is one deal that came back to haunt the Sabres time and time again. In each of his first six seasons in Boston, McNab scored at least 35 goals and hit 75 points. In 595 games with Boston, McNab put up 587 points. It’s safe to say the Sabres could’ve used that secondary scoring behind the French Connection during that span.

Savard put up good numbers – 305 points in 467 games – but never came close to doing what McNab did for the Bruins.

Goaltender Tom Barrasso had been in Buffalo’s crease for six seasons. A former Vezina and Calder Trophy winner, Barrasso was entering the prime of his career in 1988 at the ripe old age of 23 years old.

With the Sabres off to a poor start for the 1988-89 season, general manager Gerry Meehan decided that a move had to be made. He dealt Barrasso to the Pittsburgh Penguins along with a 3rd round draft pick for defenseman Doug Bodger and left wing prospect Darrin Shannon.

In 12 years with the Penguins, Barrasso went 226-153-53 with a 3.27 goals against average and a .896 save percentage. They weren’t spectacular numbers to the eye, but back then, goaltenders were consistently in the 3.00 goals against range. Besides, it wasn’t his regular season performances that made this a poor trade for Buffalo, it was his postseason success.

Barrasso backstopped the Penguins to back-to-back Stanley Cup championships in 1991 and 1992. His goals against for his playoff tenure was under a 3.00 aside from an anomaly in 1995. He continued a Hall of Fame career after being dealt from Buffalo, and his success with the Penguins definitely left a bitter taste in the mouths of many fans.

As far as what the Sabres received in return for the trade, Bodger was a steady blueliner in his 8 seasons in Buffalo, but never was anything more than steady. Shannon, on the other hand, scored just 10 goals in 52 games with the Sabres before moving on.

In 2001, everyone knew that Dominik Hasek’s time with the Sabres was coming to an end. He wasn’t happy with the direction of the team and wanted to go to a team that had a real shot at winning a championship. At the wee hours – and I mean wee, 1:30 am – of July 1, 2001, the Sabres dealt Hasek to the Detroit Red Wings in exchange for Vyacheslav Kozlov, a 2002 first round pick and future considerations which became Jim Slater. 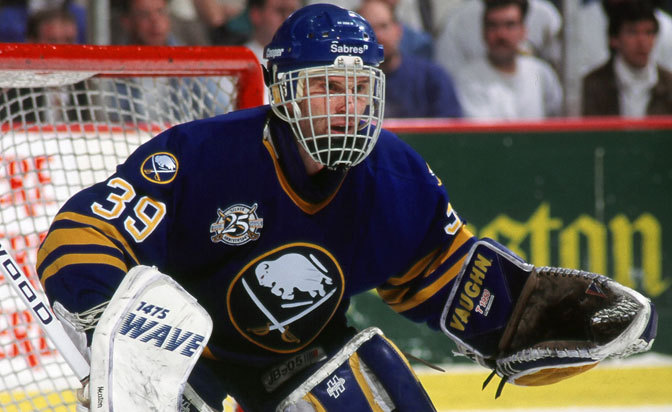 Kozlov spent just one season in Buffalo, scoring nine goals and 13 assists in 38 games before being traded to the Atlanta Thrashers. The first round pick was used to trade up for Daniel Paille, and Slater never played for the Sabres as he was drafted by the Thrashers.

So, for arguably the greatest goaltender in league history, Buffalo received a rental and an eventual depth forward who became more known with the Boston Bruins. Even with Hasek basically holding the team hostage, it seems odd that they couldn’t get just a bit more for someone of his caliber. Oh yea, Hasek would win the cup in 2002 with the Red Wings.

Where to begin with this one? The summer of 2011 was one of the weirdest times for Sabres fans. There was hope after new ownership took over, and the team went on a remarkable run to the postseason. The belief among fans and management was that the team was just a few pieces away from really competing for a Stanley Cup. That belief, unfortunately, turned out to be a false one as the organization was much further away from contending than they thought.

Of all the moves the team made during that summer to try and improve, none come in comparison to the bust that was Ville Leino. The Sabres signed the former Philadelphia Flyers forward to a six year, $27-million contract. Leino was expected to come in and provide an offensive burst for the team. What happened was, over the span of three seasons, Leino put up just 46 points in 137 games. He was paid approximately $587,000 per point scored with Buffalo.

With that type of production – including an entire season without a goal — it was no surprise when new general manager Tim Murray decided to use one of his compliance buyouts on the forward.

1. Not re-signing Briere and/or Drury

This move is as obvious as stating that the sun will rise tomorrow. Buffalo was coming off its best season in franchise history with its top two players set to hit the free agent market. Because of Regier’s no negotiating policy, the Sabres didn’t talk to either Chris Drury or Danny Briere throughout the season about extending. When Regier finally did decide to talk contract, it was too late. Briere had signed with the Philadelphia Flyers while Drury jumped to the New York Rangers.

While the Drury departure didn’t sting too much based on his career crumbling shortly after, the loss of Briere still hurts many fans. One of the more clutch players in NHL playoff history left for nothing. What made it worse was the fact that Briere is on record stating that he was ready to stay in Buffalo for the rest of his career, but the team made him an offer that wouldn’t have made sense to accept.