The NHL’s first weekend of 1964-65 saw three games scheduled on each night.  In last night’s contests,  Montreal and the Rangers battled to a 2-2 draw at the Forum,  the Maple Leafs bombed the Boston Bruins 7-2 in Toronto and the Black Hawks tipped Detroit 4-2 in Chicago.

Montreal, New York saw one off

In Montreal, the Rangers took a 2-0 second period lead, after a scoreless initial frame, on goals by Earl Ingarfield and Bobby Nevin.  It remained that way until with just over four minutes left in the game, rookie Yvan Cournoyer got the Habs on the scoresheet when he drove home a Jean Beliveau rebound.  Less than  minute later Beliveau was set up by Cournoyer at centre ice, skated in alone and beat Ranger goalie Marcel Paille to knot the score at two. 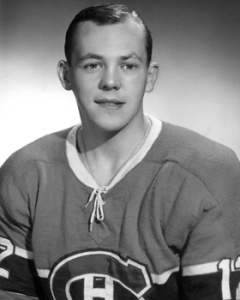 With 1:22 to play, referee Frank Udvari whistled the Rangers’ Arnie Brown to the sin bin for interference, giving the the home side the chance it needed to put this one away.  However, Paille stood his ground in a fashion befitting the game’s first star, enabling the New Yorkers to escape Montreal with a point.

Mikita the man in Hawks’ win

Stan Mikita was the key man for Chicago in their win over the Red Wings.  Mikita scored once and set up the other three Hawks scores in a dominating performance. Mikita now has five points on the season.  Other Black Hawks marksmen were Chico Maki, Eric Nesterenko and Bobby Hull.  Ed Joyal and Alex Delvecchio replied for the Wings. 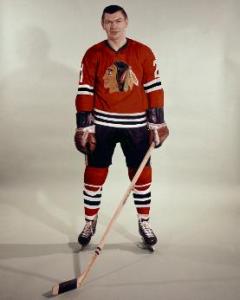 Detroit coach Sid Abel said of the Wings’ play “We were bad in the first eight minutes only.”

At Maple Leafs Gardens, where festivities began with the traditional appearance of the 48th Highlanders, the Stanley Cup Champion Maple Leafs encountered little resistance from the Boston Bruins.  Many pundits have picked the Bruins to rise above the NHL’s nether regions this year, but Milt Schmidt’s crew gave little indication they were capable of anything beyond last season’s morbid performance.

Although the Bruins did score the game’s first goal on a play by Murray Oliver, they were never really in this one.  Frank Mahovlich and Red Kelly each scored twice for Toronto.  Eddie Shack, Davey Keon and rookie Ron Ellis with his first NHL goal had the other Leaf scores.  Dean Prentice, often mentioned as a player Leaf GM Punch Imlach covets, had the other Boston tally. 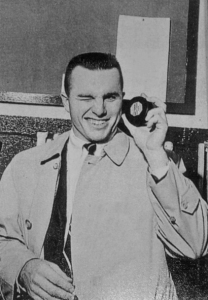 Johnny Bower’s fine work in the Toronto goal during a two-man disadvantage in the second period proved to be the game’s turning point.  Bower took away what appeared to be three sure Boston goals with spectacular saves.  Any wind the Bruins may have had in their sails up to that point quickly dissipated.

In American Hockey League action in Pittsburgh, the Buffalo Bisons fell behind 2-0 early and stormed back with a third period rally to gain a 2-2 tie with the Hornets.

Murray Hall, a former Bison, and player-coach Vic Stasiuk scored on Buffalo netminder Ed Chadwick in the first period to put Pittsburgh in front.  Chadwick then shut the door the rest of the way and gave his club a chance to come back. 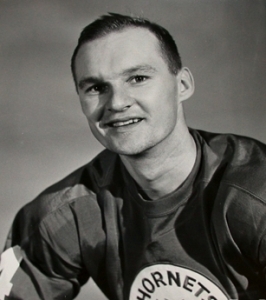 And come back they did.  Rookie forward Jack Stanfield and veteran Jerry Melnyk beat Hornets’ goalie Hank Bassen four minutes apart in the final frame to even the score.  Bassen, like his counterpart Chadwick, had an outstanding game.

The Rochester Americans shut out the Cleveland Barons, 2-0 in other AHL action last night.  Peter Stemkowski and Wally Boyer each had a goal for the Amerks while goalie Jerry Cheevers recorded the shut out.  In the final AHL game of the night, Providence edged Hershey 2-1 on goals by Gil Gilbert and George Ranieri.  Keith McCreary had the Hershey marker.