March has been a rough month for the Chicago Blackhawks. The players, especially, have been through a bit of a wringer. They’ve dealt with the stress of the trade deadline, where practically everyone felt they could get traded at any moment. They were forced to say goodbye to a beloved young teammate in Brandon Hagel, an affable future Hall-of-Fame goaltender in Marc-Andre Fleury, and a depth role-player in Ryan Carpenter. Through 14 games, they’ve lost nine of them, including a couple real stinkers last week where they gave up big leads; literally finding ways to lose.

Sure, these guys make big money, and all teams have to deal with the grind of a hockey season. But let’s face it; it hasn’t been an easy year for the Blackhawks. They’ve endured a terrible 1-9-2 start, felt the wrath of the Kyle Beach scandal (even though most of them weren’t even around at that time), and went from playoff hopefuls to the reality of a long rebuild ahead.

Despite all the chaos around them, some players have still found ways to thrive. When you look at everything that’s been stacked against them, that’s not an easy feat. As the month of March draws to a close and the home stretch of the season is upon us, let’s look at some of the players who are trending in a positive direction.

We might as well start with the obvious, and that’s the top line of Alex DeBrincat, Dylan Strome and Patrick Kane. Ever since head coach Derek King put them together in early March, these three have been on a tear that’s been hard to stop. We’ll start with Kane since he’s the biggest superstar of the three, at least for now.

In the month of March, Kane went only two games without a point; against the Boston Bruins on March 15 and the Florida Panther on Mar. 31. Besides that, he boasts five goals and 21 assists for 26 points in 14 games. That includes a career-high six-point game (1G, 5A) against the Anaheim Ducks on Mar. 8. He’s not scoring goals like he used to, but he finds ways to be effective nonetheless.

Kane’s overall 58 assists is currently 6th in the league, and his 79 points ranks 13th. Even at 33 years of age, Kane shows no signs of slowing down. He continues to be one of the best, and most consistent, playmakers in the league.

DeBrincat is the biggest beneficiary of Kane’s playmaking abilities. The 24-year-old endured a short lull in mid-March where he went pointless for three games in a row. In hindsight it’s obviously hard to complain about this, because he’s scored a goal in almost all the rest of them…

The Cat currently boasts a goal in nine of the last 14 games. Add 10 assists to that and we’re looking at 19 points in 14 games. That’s awfully good. I quipped on our recent Blackhawks Banter show you could practically count on DeBrincat for a goal a game these days. I wasn’t too far off.

Strome Centers It All

It’s pretty hard to believe this is the guy who was a frequent healthy scratch under former head coach Jeremy Colliton. Even though we can all shake our heads and blame Colliton for being clueless, it really is amazing the transformation Strome has made. I don’t think anyone, including Strome himself, can really believe it’s this good right now. Can he sustain it? Well, he certainly has through the month of March!

Like Kane, Strome went pointless versus the Bruins and the Panthers in March. But other than that, the center sports at least a point in every other game. This adds up to 10 goals and 10 assists in March, including his hat trick and four-point showing on Mar. 8 against the Ducks. 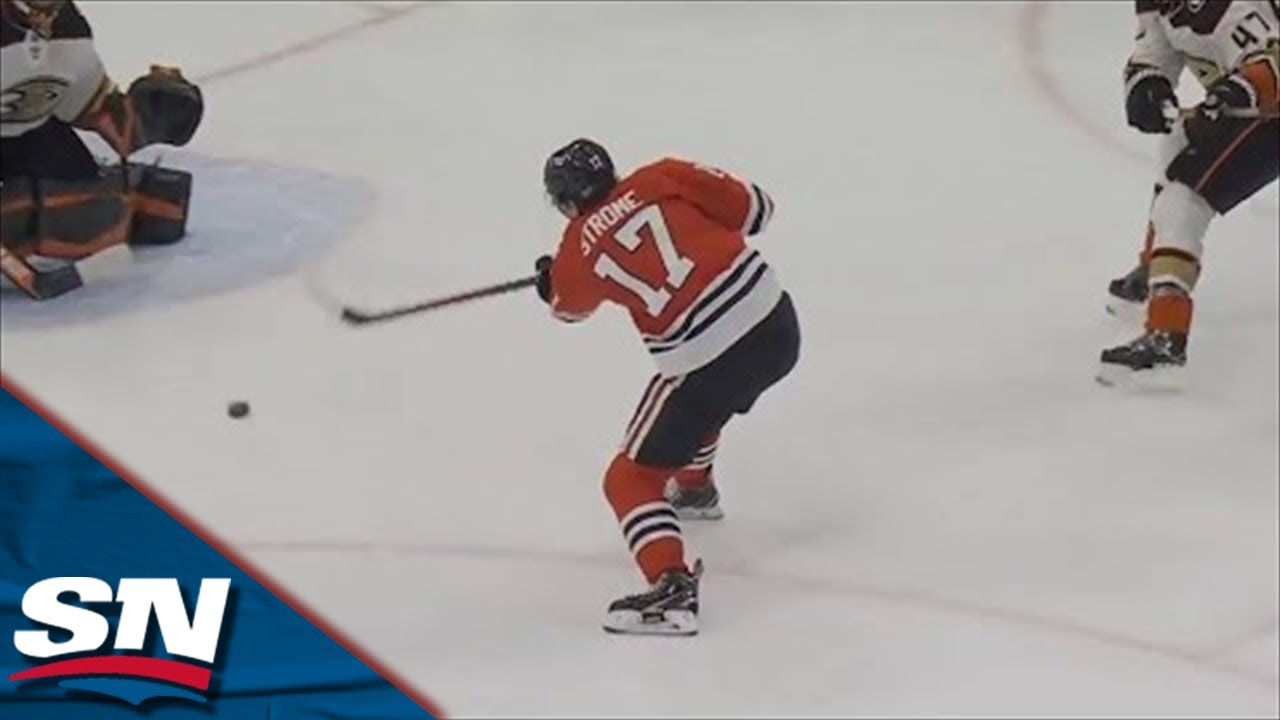 He also has a 50% success rate in the faceoff circle. Strome has certainly shown he can complement Kane and DeBrincat exceedingly well, and they him. Not a bad top line to jumpstart a rebuild, eh?

While the above three mentioned forwards are the motor that makes the Blackhawks hum, there are a few other forwards who have stepped up their contributions of late.

We all know Jonathan Toews had a rough start this season after missing all of last season due to Chronic Immune Response Syndrome. He didn’t pot his first goal until Dec. 9, and from October through January only earned four goals and 19 points. Then he missed all of February with a concussion. Let’s just say no one expected too much from the captain upon his return to the lineup on Mar. 3.

Toews then raised some eyebrows with his recent comments about the direction of the team and his fit with it. Shucks, maybe he just needed to get that off his chest. Because for one reason or another Toews seems to have finally found his stride on the ice. He’s tallied six goals and added another four assists in 14 games in March. He’s certainly picked up the pace in the finish department. It’s fitting that Toews played his 100th NHL game on Mar. 31. Kudos to the captain, and let’s see if he can keep the momentum rolling through April.

Raddysh Getting a Fresh Start

I don’t think anyone will deny it was tough to see one of the Blackhawks’ top producers in the young and energetic Hagel traded to the Tampa Bay Lightning. But the pain can be diminished a bit by the acquisition of Taylor Raddysh as part of the return. The former OHL teammate of DeBrincat and Strome is hoping for more playing time and a fresh start in Chicago. He’s certainly impressed so far. In his first seven games with the Blackhawks, Raddysh has registered two goals and three assists. This comes after tallying only five goals and seven assists in 53 games with the Lightning.

Both of Raddysh’s goals were power play goals, as he’s been inserted on the top power play unit as Hagel’s replacement. He’s also been playing on the second line with Toews, which is likewise where Hagel spent much of his time before leaving. Raddysh’s three helpers have all been primary as well. This sweet set-up for Calvin de Haan’s second goal of the season is my favorite so far.

For the remainder of this season and two seasons beyond, Raddysh has a cap hit of only $758,333. The 24-year-old looks as if he could be a nice building block for the rebuild.

Sam Lafferty has been another pleasant surprise for the Blackhawks. The former Pittsburgh Penguin came to Chicago in exchange for Alex Nylander on Jan. 5. At the time, everyone was mostly just happy to be rid of Nylander, who never amounted to much despite his pedigree. Lafferty was seen as just another grinding bottom-six forward on a team with a plethora of grinding bottom-six forwards.

But Lafferty has stood out from the rest. He’s not afraid to be physical, he has a great work ethic and he gives his all every game. At first this didn’t pay off on the score sheet. Lafferty picked up only one goal and one assist in his first 18 games with the Blackhawks. But now the Hollidaysburg, PA native is picking up some steam. He’s notched four goals and an assist in the 14 games during March. He’s a constant threat as a staple on the Blackhawks third line, and a contributor on the penalty kill.

Lafferty is an unrestricted free agent at the end of the season. But I’m guessing he’s going to be playing hard in April with the intention of earning a contract extension with the Blackhawks.

Now we all know defense has been a sticking point this season, and for a while now actually. The Blackhawks are NOT known for their stalwart defense like they were back in the days of Brent Seabrook, Duncan Keith, Niklas Hjalmarsson and Johnny Oduya (excuse me while I go lay a wreath and cry). But there are a few Blackhawks’ defensemen that should be recognized for their contributions of late; especially in the month of March.

Jones has been an assist machine for most of the season. He contributed seven assists in October, eight in November, five in December, six in January and five in February. All very consistent and pretty much what we’ve come to expect from the defenseman. A sticking point was he only potted two goals in all that time.

But in March he notched two more goals and added nine more assists. These 11 points are the best of the season so far. Now we all know Jones is paid A LOT of money for A VERY LONG time to be a top defenseman for the Blackhawks. That includes putting up points just as much as preventing them. Let’s hope he’s just getting started.

Jake McCabe isn’t exactly known for his offensive prowess. It’s more his job to be the shut down defenseman. But a cast of rotating young blueliners, plus Connor Murphy being out with a concussion, has forced McCabe to take on more responsibility and step up his game. He’s responded accordingly.

The 28-year-old currently has three goals and 15 helpers on the season. But eight of those assists have come in the month of March. To put this in perspective, half of his assists have been in the last 14 of his 61 games played. That’s a pretty nice uptick, and an added bonus in his contributions to the team.

I mentioned above that there has been a rotation of younger defensemen in and out of the Blackhawks’ lineup. Numerous blueliners have been called up from the Rockford IceHogs for short stints with the big club.

Related – 3 Blackhawks to Watch the Remainder the 2021-22 Season

But one young defenseman that has been with the Blackhawks the whole time is Caleb Jones. Jones missed the first month of the season due to a wrist injury, but has been an everyday player pretty much since then. His ice time has increased incrementally as well. From November through February, Jones averaged 15:25 minutes of ice time. In March, he averaged 19.25 minutes. It’s clear Jones has gained more trust with the coaching staff, and he’s etched out a larger role for himself.

Jones’ production has also shown this month. His two goals and four assists in March account for approximately half of his four goals and nine assists on the season. He’s another player whose contract is up after the season, but I’m sure he would love to continue his career in Chicago alongside his brother Seth.

While it’s been a rough season and a rough month for the Blackhawks, the home stretch is here. The players are doing their best to end things on a high note. The above nine players having been building on their success all season, and it paid off with some positives in March. Time will tell if they can finish out the season strong, and whether they will be here next season to keep building on it.