Aaron Ekblad became the first defenseman ever granted “exceptional player” status in CHL history last spring. Currently a defenseman for the Barrie Colts of the Ontario Hockey League, Ekblad is playing in the OHL a year earlier than anyone else his age this season, as every other 1996-born player isn’t eligible to play major junior yet.

A native of Belle River, Ontario, Ekblad is just the second player to ever receive the honour (John Tavares was the first), and because of that, he was selected first overall by the Colts in the 2011 OHL Priority Selection. He’s played a year ahead of his age group in each of the past two seasons, and dominated while doing so, so it came as no real surprise when he was granted the “exceptional player” status. Last season with his Sun County Panthers AAA team, Ekblad tallied 34 points in 30 regular season games and 21 points in 18 playoff games. Given that this was with him playing against players a year older than he was, those numbers were pretty impressive.

In order to be granted “exceptional player” status, Ekblad had to go through a very long application process and a six-week review by a Hockey Canada panel. The panel reviewed everything from his academics, psychological maturity and of course, his on-ice ability. Ekblad even had to write an essay. After going through all that, Ekblad’s application was approved unanimously, and a virtually permanent target was placed upon his back.

When you first see Aaron Ekblad, one of the first things you’ll likely noticed is his size. He’s six-foot-three, 205 pounds – at fifteen-years-old. Second, if you’ve ever watched an interview with him, you’ll notice that he doesn’t sound like your typical teenager one bit. Ekblad’s very intelligent and thoughtful, and if you think all the buzz around him might be getting to his head, you couldn’t be more wrong. He’s very humble considering his status.

“People say I have strength in reading the play, in both my offensive and defensive abilities,” he’s said. “But I know none of these have been perfected.” If you didn’t know beforehand, you would never guess that Ekblad was the youngest player currently in the OHL.  As the Toronto Star’s Daniel Girard wrote, “You almost want to demand to see his birth certificate.” 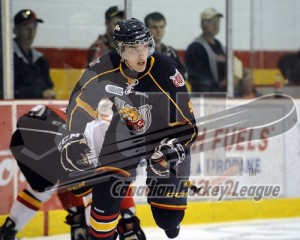 Legendary defenseman Bobby Orr, who’s an “advisor” to the Ekblad family, says, “He’s going to have his ups and downs. It’s a big step for the kid. He’s going to need support and I’m sure he’s going to get it. He has a great opportunity to do very well in this game but he’s got a long way to go.”

One of the players Ekblad is compared to the most just happens to be Orr, mostly because Ekblad is very talented offensively.

Ekblad’s strengths appear to be pretty much everything, but in particular he excels at skating, puck-handling, and shooting. He also has a great work ethic, but even he admits that his defensive play still needs some work.

A good mix of both will be just fine with Colts fans.

The son of Dave and Lisa Ekblad, and brother of Darien (a goaltender with the Junior B Leamington Flyers), Aaron will have a lot of pressure on him to perform well not just this season, but in the many more to come.

“I know there’s a lot of expectations that I’m going to have to live up to,” he’s said, “I feel I’m ready for it.”

So far he’s playing well with Barrie; Ekblad has 7 points in 17 games this season, including 3 goals. His size has already made him an intimidating figure on the ice, and the calmness with which he moves the puck is outstanding. Those that aren’t calling him the next Bobby Orr are comparing him to Chris Pronger, and Ekblad is being given every opportunity to shine in Barrie, as he’s playing on the teams’ top pairing.

“They put me out in key situations where I can prove myself and that’s what I’m trying to do,” Ekblad says.

What he’s doing at his age is amazing, and it’s easy to forget that Aaron’s not even NHL draft eligible until 2014.

He’s already been written about on nearly every major hockey website in North America, been featured in national newspapers, played on national television, and he’s even had his own special feature story on TSN. Ekblad is still just an OHL rookie (a very young rookie at that), but he’s already being called “hockey’s next great superstar.”

As one of the game’s best defenseman ever said in an interview with the Toronto Star, Orr seems to have said it best: