The Albany Devils sizzling start to their 2013-14 season is now leaving behind an impact in their record book.  With a pair of victories over the Bridgeport Sound Tigers and a dominating win over the Hartford Wolf Pack this past week, the Devils have now won a franchise record six games in a row.  Last season, the Devils had a similar December surge when they picked up a win in five straight contests.

The Devils closed out November with an offensive bonanza as they defeated the Sound Tigers 8-6.  They continued their winning ways with a win over the division-leading Springfield Falcons and a shootout victory over the Binghamton Senators as December opened.  Facing a home and home set with the Sound Tigers and another division match-up with the Wolf Pack, the Devils continued to roll.  With a little bit of luck and a great amount of determination, Albany picked up a victory in all three contests and doubled their win total during their streak.

On Tuesday, the Devils traveled to Bridgeport for the first time this season.  An 11AM start, the earliest start time of the season for the Devils, and a light snow outside Webster Bank Arena made for a memorable morning by the harbor.  Even better for the Devils, they would find themselves in a lucky spot before the puck even dropped as the New York Islanders, the NHL affiliate of the Sound Tigers, called up the AHL’s leading scorer, Ryan Strome.  Once inside, about 400 people of the 7,724 announced crowd would actually be on hand for the game and the Devils made sure to make the ride home after the game a positive one for the hearty Albany fans.  After many stoppages in play during the opening minute, the teams settled down.  Albany struck first with a power play goal late in the opening period when Reece Scarlett blasted the puck into the top corner of the net.  With the goal, the Devils had scored a power play goal in nine consecutive games.

Watch as Reece Scarlett and Joe Whitney show off two different ways to score a goal:

In the second period, Corbin McPherson found an open Joe Whitney and sent him on a partial breakaway.  Despite pressure from Bridgeport defenseman Dallas Jackson, Whitney buried the puck behind Parker Milner as he fell to the ice to give the Devils a two-goal advantage.  Later in the period, Whitney fed Raman Hrabarenka for a one-timer from below the circle to close out the scoring.  With the primary assist, Whitney picked up his first three-point game since October 23rd at Utica.  However, the Sound Tigers would not go down quietly.  They dropped the gloves on three separate occasions in the final frame in an attempt to send a message that Friday’s battle at the Times Union Center would be much different.  Through the fisticuffs, Keith Kinkaid held on and made 22 saves for his third shutout of the season.

On Thursday evening, the Devils received some more good news as the New Jersey Devils sent Mattias Tedenby to Albany for a conditioning assignment . During 84 prior games in the AHL with the Devils, Tedenby scored 19 goals and 44 points.  In an injury shortened 2012-13 campaign, Tedenby notched 10 goals and 9 assists in 37 games.  Tedenby had not played any game since November 29th at Carolina for New Jersey and before being sent down had scored just one goal in twelve games for the parent club on the season. It did not take long for Tedenby to find his groove once he reached Albany.

Facing the Sound Tigers for the third time in less than two weeks, Tedenby picked up his first AHL point of the season just 4:46 into the game when Mike Hoeffel buried it past Kenny Reiter.  Bridgeport would counter when Mike Halmo slapped the puck from down low and past Kinkaid.

The Devils would respond with five unanswered goals.  Mike Sislo passed the puck on a two-on-one to Chris McKelvie, who then scored a shorthanded goal to give the Devils all they would need less than a minute after the Sound Tigers tied it.  After a scoreless second period in which both teams picked up seven shots on goal apiece, Tedenby continued to impact the final result when he wristed it from the left circle.

Artem Demkov, playing his first game for the Devils after being released from his PTO and under a standard player contract, scored on a penalty shot after a fancy deke to give the Devils a 4-1 lead.  The Devils added two more power play goals when Tedenby scored his second of the game and Whitney notched his tenth of the season, tied with Reid Boucher for the team lead.  Kinkaid stopped 23 of 24 shots for his 11th victory of the season.

The Devils battled the Wolf Pack in their most recent game.  After being shut out in their last two games against each other, the Wolf Pack were hoping to strike early on the Devils.  Instead, Albany took command early and ended the first period with a dominating 3-0 lead.  Sislo fed Seth Helgeson at the point where he fired it towards the goal. Tedenby was able to deflect it past goaltender Doc Grumet-Morris to pick up his third goal in just two nights.  In a carbon copy of the previous night’s script, Demkov would score right after Tedenby to give the Devils a 2-0 lead.  Stefan Matteau picked up the primary assist with a beautiful pass to Demkov in what will be Matteau’s final game with Albany until he returns from the United States World Junior team.  The Devils ended their first period scoring spree when David Wohlberg scored his first goal since Opening Night at Hartford.  On a two-on-one rush Wohlberg received a spectacular backhanded pass from Harri Pesonen and buried it to chase Grumet-Morris from the game.

The Wolf Pack upped their pressure with Jeff Malcolm in net and it finally paid off.  With Pesonen in the penalty box for holding, Hartford’s points leader, Danny Kristo, had space at the top of the left circle and scored his team-leading 11th goal of the season.  J.T. Miller, recently sent down from the New York Rangers, cut the deficit to one almost seven minutes into the 3rd period.

The Devils were determined to keep the streak alive and less than two minutes after the Hartford goal would begin rebuilding their lead.  Brandon Burlon scored on a rebound after Pesonen’s shot was stopped by Malcolm.  It was Burlon’s second goal of the season and also his second goal against the Wolf Pack with his first being scored on November 20th at Albany.  Hrabarenka closed out the scoring with his third goal, all on the power play, in five games.  It also gave Hrabarenka a point in his seventh consecutive game, tops among all Albany skaters.  Scott Wedgewood started and stopped 26 of 28 Hartford shots to win his third game in a row.

Highlights from the Devils victory over Hartford: 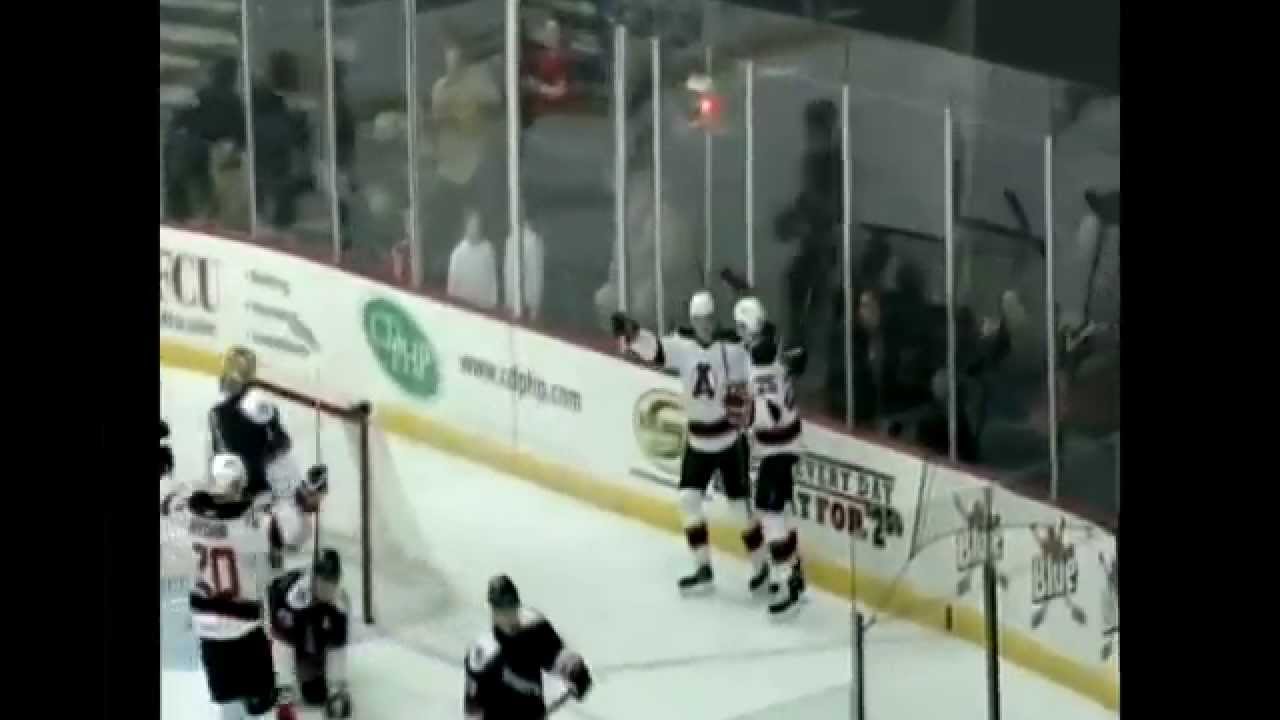 The Devils will return to game action on Saturday, December 21st when they travel north to Binghamton.  Albany will close out their pre-Christmas break schedule the following afternoon when they return to Bridgeport for their second game of three at the Webster Bank Arena this month.  The Devils will not play at the Times Union Center until December 27th when they resume the Time Warner Cable Cup series against the Adirondack Phantoms.