With the Anaheim Ducks’ 25th-anniversary season set to commence in October, taking a look in the rearview mirror at the club’s exciting albeit brief history is only natural. Then there is the fact that the 2018-19 season is one for which NHL jersey provider Adidas is beginning to introduce third jerseys for a handful of teams after only having standard home and away sweaters for each club in its inaugural 2017-18 campaign.

The timing of these developments has made for a perfect storm of nostalgia in Anaheim. On Saturday, July 21, the Ducks unveiled a new third jersey that calls back to their former “Mighty” days.

The notion of the Ducks’ new alternate outfit having strong ties to the franchise’s past was one of the worst-kept secrets in the hockey world. Indeed, Anaheim’s third sweater features the original Mighty Ducks crest as the main logo. Jade, white, and eggplant-colored stripes recreate that original diagonal pattern from the club’s Disney days.

Here are some different looks at our #Ducks25 third jersey. See even more here: https://t.co/GrO3taRFR4 pic.twitter.com/BWGgoXuz9a

The parts of the jersey that align with the Ducks’ current scheme are the main color, which is still black. The duck foot ‘D’ logo is also featured on the shoulders. Additionally, the name and number font is the same as their current home and away uniforms, and the newer orange color is subtly represented in the hockey sticks in the main crest—an update over the previous color that leaned more towards yellow. This also keeps some continuity with the Ducks’ “Paint it Orange” campaign.

Not to throw cold water on the party, but fans should know that this particular jersey is a special commemoration of the team’s 25th anniversary season and will not be worn again beyond this season. It’s a limited-time look that the team will showcase in 15 games during the upcoming season.

After this upcoming season, the Ducks will bring back their previous third jersey last seen in 2016-17 under Reebok. This one was an orange sweater that at least brought back the Mighty Ducks crest, so going forward, the Ducks will still pay homage to their iconically fashionable past. For now, though, in looking at this alternate jersey for 2018-19, it’s hard to shake the feeling that they could have more fully committed to their retro-look for just one special season. 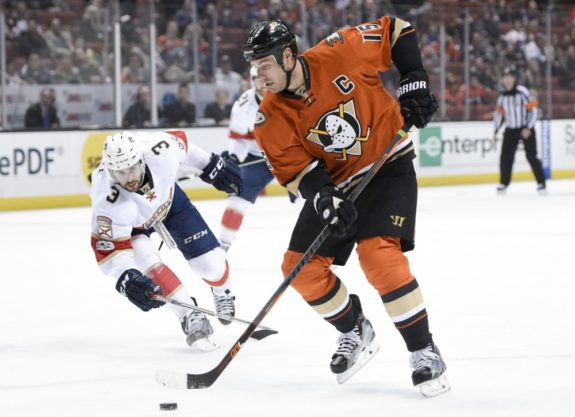 Starting in 2019-20, the Ducks will bring back their orange third jerseys, which were last seen in 2016-17. (Kelvin Kuo-USA TODAY Sports)

The fact that black is still featured as the main color is probably the biggest letdown of this new jersey design. Yes, black is the main color in their primary home sweater look, so the idea of keeping some of the current traits is understandable. Nevertheless, black is generally a boring main color for sports team jerseys, and the Ducks seem to have missed a chance to completely get away from that for just a handful of games. From a color standpoint, the new design also bears some resemblance to the San Jose Sharks’ lineup of sweaters from just prior to the 2017-18 season. I’m guessing that’s not what the Ducks want.

Beyond that, the bottom line is that the team’s 25th season should be a celebration of their history and a look back to their early days. For just one year and 15 games, why complicate the issue at all? Why not just completely go back to the original jade and eggplant jersey from the franchise’s inaugural 1993-94 season? Given the circumstances of this season plus the fact that original franchise icon Paul Kariya will have his jersey retired, there is no better time to more prominently honor the team’s roots. 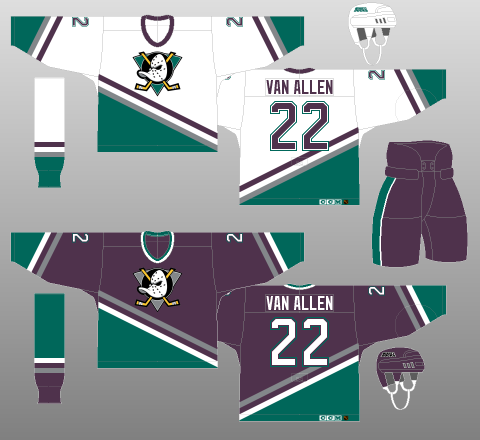 For their special 25th-anniversary third jerseys, the Ducks might have been better off fully committing to their original design from 1993. (Photo Credit: NHLUniforms.com)

At the end of the day, this is the closest aesthetic the Ducks have had to their original appearance since “Mighty” was dropped from their name. It’s undoubtedly a nice tribute to their history, but a simpler path would have been to just go all-in on the exact retro jersey for this particular season.