It was announced earlier in the week that Andrei Markov is the Montreal Canadiens’ nominee to earn the Bill Masterton Trophy given to the player who embodies perseverance, sportsmanship, and dedication to his sport.

Andrei Markov’s nomination for the Bill Masterton Trophy is a well-deserved one. WATCH -> http://t.co/9PBzX5FeD5#GoHabsGo

Many eyebrows were raised last off-season when the Montreal Canadiens’ management offered a a three-year, $17.25 million contract to the then 35-year-old defenseman. Many fans had their doubts about Andrei Markov’s performance level at this stage of his career and thought that offering him a top-two defenseman deal was a huge gamble.

Indeed the start of the decade was a tough one for Markov. After playing only 45 games in 2009-10 due to different minor injuries, including one to his knee, The Russian defender came back on his team’s lineup, ready to play on October 30th 2010. On November 13th, Markov would tear ligaments in his knee that forced him out of action again. This time, for nearly 18 months.

Markov came back to the line-up on March 10th, 2012 in a game against the Vancouver Canucks. The veteran was quick to show everyone he still had it and went back to his old tricks. Something we’ve seen before and hopefully see many times in the future, setting up P.K. Subban for a thunderous point shot.

Andrei Markov’s contribution was too little too late however. The Montreal Canadiens finished the 2011-12 season dead last in the Eastern Conference, 28th in the league.

Since returning, the 14 season veteran has missed only a single game in three seasons. Showing up isn’t everything, Andrei Markov has played some of his very best hockey lately, legitimately an NHL top pairing defenseman.

Although far from his career best of 64 points in 78 games, Markov has been one of the best offensive player on his team this season. As pointed out in a previous column, on the Montreal Canadiens’ weak man advantage unit, only Andrei Markov cracked the 20-point mark with 21 points as of this writing, closest behind is partner P.K. Subban with 16 points. 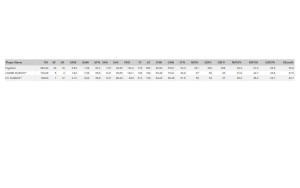 Puckalytics.com’s Super WOWY is pretty clear about Markov’s utility to the Montreal Canadiens. While top D-Man P.K. Sizzle takes care of the offense and big time plays, Markov is the insurance policy by his side.

P.K. Subban’s defensive numbers drop drastically when he is not playing with Andrei Markov. They average 1.58 Goals Against per 60 together. That number increases drastically for Subban when Markov isn’t around, up to 3.64. Same for his GoalsFor%, down to 36.8% from 62.5%.

Seems many of us threw the towel a little early on Andrei Markov. Although he most likely won’t win the Bill Masterton Trophy has it already has Devan Dubnyk’s name written all over it, it is important to notice the accomplishment that is to play that high a level after a potentially career-ending injury.