With their place secured in the 2015 Stanley Cup Playoffs, the Montreal Canadiens, who have 6 games still on the calendar, can already call this a successful season. However successful does not mean great.

It has become a speech habit. ”The Montreal Canadiens are first” inevitably followed by an apologetic reasoning containing the name Carey Price. Not necessarily fair, but remains the Habs have never been an offensive powerhouse this season.

The Montreal Canadiens can’t become a powerhouse if they don’t have any power. With this era or parity of talent among the teams, the worse teams can beat the best, and they have, especially the Canadiens.  A working power play is key. The Habs may need a locksmith. They are 25th in the league in goals scored 5v4. 33 goals scored on 216 power play opportunities for an abysmal 15.2% efficiency rate.

This is something the Montreal Canadiens’ coaching staff should work on in a hurry if they plan on going deep in the playoffs, even more so if they’re looking to hoist silverware in June.

Although the Boston Bruins proved in 2011 that you can make it to the finals without a top-notch man advantage if you play tight defensively and have an elite goalie. However you do you need it to win. Boston famously reached the Stanley Cup finals having scored a measly five power play goals after three series (Two actually, they didn’t record a single PP goal in the first round against the Habs). They then doubled that number in the finals, scoring five goals 5v4 against the Vancouver Canucks.

The Habs’ power play relies on a good base. Subban, Markov, Plekanec, and Pacioretty combine for 20 of the 33 goals scored. Of the four of them, only Andrei Markov cracked the 20 point mark on the power play. The Habs need more contributors. Two of them named P.A. Parenteau and Alex Galchenyuk.

There is little hope that Parenteau gets better. Since coming back Parenteau hasn’t made much of an impact offensively. His four points in 10 games attest to that. A few lucky bounces came his way, having two secondary assists and his lone goal coming off a Ben Bishop mental mistake. 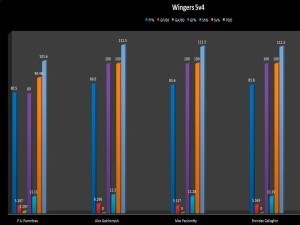 Beyond the numbers, the good ol’ eyeball test isn’t favorable to Parenteau either. In most sports but especially in hockey, the legs feed the wolf. Parenteau can’t match the speed of his linemates and is often behind the play, the last to exit both the offensive and defensive zone, unless he floats.

At the end of the day, the name of the game is goal scoring and with only 15 shots on net in ten games, and a season shooting% at 5.71, Parenteau isn’t doing enough to help his team score, on the power play or at even strength.

As of this writing he is on the first line, on a team who has clinched a playoff spot and whose only motivation now is to play for home ice. By the time the playoffs roll around, don’t be surprised to see Parenteau suffer the same fate as the man he replaced, Daniel Brière. That means fourth line minutes and the occasional scratch.

Alex Galchenyuk is a whole different story. The advanced stats speak to his talent. He can do a lot more and his team needs him too. Especially in the playoffs where fellow left-winger Max Pacioretty will have a huge bull’s-eye on his back.

It is easy to forget that the russo-american is only 20 years young. The 2012 third overall pick has been an NHL regular for the past three seasons. Three seasons but the current one is the first for many aspects.

Breaking through in the lock-out shortened season and sidelined with an injury last season that kept him to 65 games, Alex Galchenyuk has played over 70 NHL games for the first time this season. Fatigue no doubts sets in at this time of year, especially for a young player. Fatigued or not, Galchenyuk still tries to make an impact.

Recording but a single assist in his last five games, Galchenyuk may have retrieved his mojo after hypnotizing Roberto Luongo with some stick handling wizardry, scoring a big game-tying goal against the Florida Panthers. Galchenyuk reached the 20-goal plateau for the first time of his career.

Breaking the 40 point mark for the first time of his career this season, only nine points earned on the man advantage so far this season, and of his 20 goals, only three scored 5v4.

The power play should be Galchenyuk’s bread and butter. A overachieving stick-handler and one of the hardest wrist shots on his team, more than eight points is to be expected. But inexperience and wanting to do too much leads him to be blown offside more than anybody else on his team.

Another first and by far the most important for Alex Galchenyuk will be playoffs. Part of the young, discombobulated team eliminated in the first round by the Ottawa Senators in 2013 and kept on the sidelines until the Eastern Conference Finals, Galchenyuk has only played 10 playoff games. For the first time of his career, he will enter the playoffs a top-six forward and will be counted on to produce.

Canadiens Looking To Prove Themselves

Alex Galchenyuk will find himself in that group of Max Pacioretty, David Desharnais, and Tomas Plekanec that needs to do better than they did in last year’s playoffs if the Montreal Canadiens expect to be successful this spring.

In the tight checking game of the playoff, the best way to earn their points is on the man advantage. Galchenyuk could be the spark plug needed to get these players going. By performing well, it would supply Plekanec with better offensive opportunities and would take some pressure of Pacioretty and Desharnais.

First in the league in goals against, thanks in part to their first defense pairings of Andrei Markov and P.K. Subban and mostly to the historic season Carey Price is having, the Habs need scoring to put them over the top in the playoffs. At even strength, they are 16th in the league, they will need their power play if they want to go deep in the playoffs.