ST. PAUL, Minn. — Josh Archibald had two goals and an assist, and the Arizona Coyotes rallied from a two-goal, third-period deficit and defeated the Minnesota Wild 4-3 on Tuesday night.

Devyn Dubnyk, who missed Minnesota’s last game with a stomach bug, stopped 10 of 14 shots. Antti Raanta stopped 17 of 20 shots before leaving with a lower-body injury after two periods. Adin Hill stopped all five Minnesota shots in the third period.

The Coyotes didn’t register a shot on goal in the first 17 minutes of the second period. But they broke loose with a three-goal flurry in the first 8:39 of the third.

Trailing 3-1 after two periods, Arizona pulled to within one on a disputed goal early in the third. Crouse picked up a turnover in the Minnesota zone and fed Archibald, who beat Dubnyk with a wrist shot from the high slot. Minnesota challenged the goal, alleging that Archibald was offside, but video replay confirmed the call on the ice. 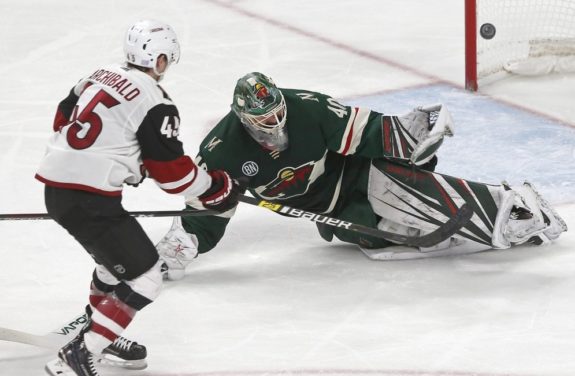 The Coyotes then scored twice in less than two minutes to take the lead. Grabner tied it when he took a pass from Brad Richardson, who had set up behind the net, and shot past Dubnyk.

Alix Goligoski set up the go-ahead goal when he fired a pass from behind his own net all the way to the Minnesota blue line, where Archibald split two defencemen, took the pass in stride and beat Dubnyk for his second goal of the game and a 4-3 lead for the Coyotes.

Crouse scored the first goal of the game 4:49 into the first period, but Coyle tied it up a minute later. The Wild then dominated the second period, with Parise scoring on the power play and Zucker adding an even-strength goal.

NOTES: F Nick Schmaltz made his debut with the Coyotes on Wednesday. Schmaltz was acquired from the Chicago Blackhawks in a trade for forwards Brendan Perlini and Dylan Strome. … The Coyotes won for the first time (1-10-1) when trailing after two periods. … Minnesota is now 6-2-1 when leading after two. … Dumba has a point in seven straight games, tying the franchise record scoring streak for a defenceman.

Coyotes: At Nashville on Thursday night.

Wild: At Columbus on Thursday.