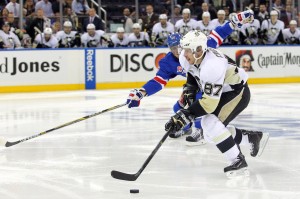 Can the Rangers keep Sidney Crosby and the Pittsburgh Penguins at bay and tie this series back up?    (Brad Penner-USA TODAY Sports)

The New York Rangers have a must-win situation on their hands in game 4 of their second round playoff series against the Pittsburgh Penguins.  While technically not an elimination game, a Blueshirt loss would give the Pens a stranglehold on the series at three games to one with the next game at Consol Energy Center.  The Rangers do not want that nightmare scenario.  No, if there is to be any hope of extending this post-season beyond round two, the Rangers need to answer the call tonight.

Let’s get something straight right here. If the Rangers continue to make their scheduling fiasco an issue, then they are already dead.  We know they played 5 games in 7 nights (from April 29 to May 5), something that hasn’t happened in the past 25 years of the Stanley Cup Playoffs–but much of that pain was self-inflicted.  They were unable to raise their game enough to finish the Philadelphia Flyers early, and it’s now coming back to haunt them. Yes, the scheduling of their two series was absolutely ridiculous, but a team that is willing to take the role of a victim will not succeed in the Stanley Cup Playoffs, period.

And, while we’re at it, can we please stop using the schedule as an excuse for all the Rangers’ faults? The schedule’s not to blame for their league-worst powerplay percentage (7.1% coming into game 4).  The schedule’s not the reason Rick Nash has exactly as many goals as Henrik Lundqvist so far. And the schedule didn’t cause the two blown coverages that lead to the Penguins’ two goals in game 3. Yes, fatigue might be an aggravating factor here, but all of these problems existed long before their current stretch of games.  And they are killing the New York Rangers playoff hopes right now.

There’s really no other way to describe the Rangers’ power play right now. The Rangers have converted on only 3 out of 42 PP chances thus far in the playoffs (with two of those conversions coming in game 1 against the Philadelphia Flyers on Jason Akeson’s double-minor). The sad part is that the power play is likely even worse than the numbers indicate. Failed PP attempts early in game 2  gave the Penguins an extra jump that remained throughout the game.  The Rangers were never really competitive after that point, and only Henrik Lundqvist’s heroics kept the game from becoming a blowout. The failures on the power play continued into game 3, where a botched PP actually gave the puck directly to Jussi Jokinen for a jack-in-the-box breakaway goal that crushed the Blueshirts spirit.

So, even beyond the awful numbers, this power play has been a liability for the Rangers. Adding Raphael Diaz has been a step in the right direction–he brings a shoot-first mentality that has been sorely lacking.  The good news here is that if the PP can get something going, it can still save the season for the Rangers.

When the Rangers traded for Rick Nash, many fans rejoiced. The Rangers were finally getting a true power forward with the ability to take control of games.  Like so many other trades, this one has yet to work out the way the Blueshirts intended.  Nash has been largely invisible so far in the playoffs with no goals and 4 assists, even while leading all players in shots with 41. Nash has been drawing a lot of attention from opposing defenses, which has been giving the Rangers secondary scorers more room to work. That’s no longer enough. Nash needs to be the Rangers’ best player. He needs to be forcing the play down the middle of the ice, instead of floating around the sides of the rink. If it doesn’t happen tonight, then it may as well never happen–game 4 is very likely Nash’s last chance to become the impact player the Rangers desperately need.

The New York Rangers look like a very good defensive team on paper.  They have allowed the second fewest goals against per game in the playoffs (2.30). So what’s the problem here?  Quite simply, they are still prone to defensive breakdowns at the worst possible times.  We have discussed this before the playoffs started, but the same problems have been plaguing them even now.

When a team is at even strength in the defensive zone, each player has responsibility for one player on the attacking team (referred to as the player’s “check”).  Somehow, the Rangers consistently forget that, and you see [things like] four Rangers blindly pursuing two opponents–and never even looking around to find the others.  It’s not necessary to always be right next to your check, but you should always know where he is.

This isn’t an isolated incident.  There are breakdowns like this in nearly every game. Even when they win, there are defensive breakdowns.  During Henrik Lundqvist’s recent record-breaking 302nd win against the Ottawa Senators, coach Vigneault referred to their play as “sloppy”, and many (NY Daily News reporter Pat Leonard among them) wondered if Lundqvist had some choice words for his teammates afterwards.

Keep this in mind when looking at the replay of Sidney Crosby’s breakaway goal from game 3.  Marc Staal somehow lost track of the best player in the world, and Crosby made him and the Rangers pay dearly. More than anything else, breakdowns like these have the capacity to end the Rangers season–perhaps as early as Friday, May 9.

For all the problems plaguing the Rangers right now, they are still only a single win away from tying this series. The potential return of speedy rookie forward Chris Kreider (game-time decision) could be just the spark they need.  The Rangers need to fix the most glaring problems, not reinvent the wheel.  Their attacking style can still create havoc for the Penguins in the offensive zone.  Thus far, they have made things too easy for Pens goalie Marc-Anrde Fleury.  While directing a lot of shots his way, most of the Rangers chances have been from the perimeter, with little to no traffic in front.  If they can make things harder for him by crashing the net and looking for rebounds (are you listening, Rick Nash?), they may still have a chance to get inside his head.  If not, there’s no reason that Fleury can’t keep playing like it’s 2009.  And that will surely seal the Rangers’ fate.